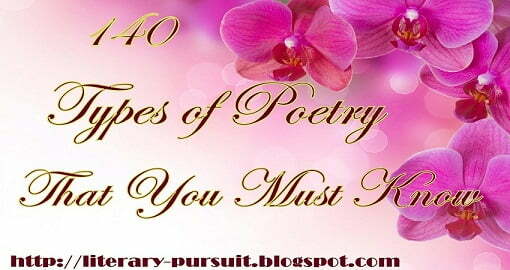 32) Didactic
A form of verse, the aim of which is to instruct the mind and improve morals.
Example: John Bunyan’ “Pilgrim’s Progress”
33) Diminished Hexaverse
A poem containing stanzas of 5 lines, then 4 lines, then 3 lines, then 2 lines ending with one word.
Example:
Love, At Last…If the ground should quake,
If the sky should fall,
If the rain lets up,
If the plants all die,
There is one thing left.If we lose sight,
If we can’t speak,
If the bow breaks,
on the last tree,

we won’t cry
or resign,
for we know

34) Dirge
“Dirge” actually stands for funeral song. Its origin was in Greek epicedium.
35) Dizain
This is originally a French form. Ten lines rhymed a b a b b c c d c d; usually (though not by definition) iambic pentameter. This is a Dizain chain.
Example: “Simple Heaven” by Jan Allison
36) Dodoitsu
The Dodoitsu is a fixed folk song form of Japanese origin and is often about love or humour.
Example: “Buried Treasure” by Suzanne Honour
37) Doggerel
The term refers to rough or poorly written verse. Such verses are basically of low humour and often betray the versifier’s deficiency or ineptitude.
Example:
Besides, he was a shrewd philosopher
And had read every text and gloss over.
38) Double Dactyl
A verse form, also known as “higgledy piggledy,” invented by Anthony Hecht and Paul Pascal. Like a limerick, it has a rigid structure and is usually humorous, but the double dactyl is considerably more rigid and difficult to write. There must be two stanzas, each comprising three lines of dactylic dimeter followed by a line with a dactyl and a single accent. The two stanzas have to rhyme on their last line. The first line of the first stanza is repetitive nonsense. The second line of the first stanza is the subject of the poem, a proper noun (usually someone’s name).
Example: “A Recent One” by Gene Weingarten and Dan Weingarten
39) Dramatic Monologue
A type of lyric poetry also known as persona poem, is a type of poetry written in the form of speech by which a character expressing his own emotion with the audience. Robert Browning is the person who used this technique in the Victorian Era.
Example: Browning’s“My Last Duchess”, “The Last Ride Together”
40) Dramatic Verse
Any drama written as verse to be spoken; another possible general term is poetic drama.
Example: Macbeth
41) Ekphrasis
Ekphrasis, alternately spelled ecphrasis, is a term used to denote poetry or poetic writing concerning itself with the visual arts, artistic objects, and/or highly visual scenes.
Example: John Keats’ “Ode on a Grecian Urn”
42) Elegy
An elegy is a sad poetry, usually written to praise and express sorrow for someone who is dead.
Example: Tennyson’s “In Memoriam” written in the memory of Arthur Henry Hallam, his friend.
43) Englyn
Englyn (plural englynion) is a traditional Welsh and Cornish short poem form. It uses quantitative metres, involving the counting of syllables, and rigid patterns of rhyme and half rhyme.
Example: “The Old Journalist” by Robertson Davies

Also Read My Articles on:
44) Epic
An epic is along narrative poetry that is usually about heroic deeds and events that are significant to the culture of the poet.
Example: Iliad and Odyssey (Greek), Ramayana and Mahabharata (Indian)
45) Epigram
A very  short, ironic and witty poetry usually written as a brief couplet or quatrain.
Example:
Here lies
my wife: here let her lie!
Now she’s at rest — and so am I.
— John Dryden
46) Epitaph
An epitaph poem is a short, memorable poetry written on a deceased person’s tombstone
Example: Ben Jonson’s “On My First Sunne”
47) Epithalamium
A poem written in honor of the bride and groom.
Example: Written by Edmund Spenser
48) Epulaerya
The “Epulaeryu” poem is about delicious food.
Example:
Eggs Rolls (Epulaeryu)

Egg rolls wrapped
with soft thin dough
Chopped spiced shrimp cooked slow
Sliced carrots and cabbage mixed
Ginger sauce affixed
Veggies and less meat
My Chinese—
Treat!
49) Epyllion
A brief narrative poetry with a romantic or mythological theme.
Example: William Shakespeare’s “The rape of Lucrace”, And Mathew Arnold’s “Sohrab and Rustum”
50) Etheree
Created about twenty years ago by an Arkansas poet named Etheree Taylor Armstrong, this titled form, the Etheree, consists of ten lines of unmetered and unrhymed verse, the first line having one syllable, each succeeding line adding a syllable, with the total syllable count being fifty-five.
Example:
PainPain,
My friend,
You give me
Many lessons
Built on many truths.
You shout with sharpened tongue ~
I must listen to your words.
Bedfellows screaming in the night,
But eternal hope will spring with dawn
To lift us from this tomb of woe, once more.
Found
Poetry created by taking words, phrases, and passages from other sources and re-framing them by adding spaces, lines, or by altering the text with additions or subtractions.
51) Free Verse
It is a kind of poetry that is free from limitations of regular metre or rhythm and does not rhyme with fixed form.
Example: “After the Sea-Ship” by Walt Whitman
52) Ghazal
A poetic form consisting of couplets which share a rhyme and a refrain.
Example: Written by Rumi and Hafiz in Persia and Kazi Nazrul Islam in West Bengal
53) Grook
A form of short aphoristic poetry characterized by irony, paradox, brevity, precise use of language, sophisticated rhythms and rhymes and often satiric nature.
Example:
EDIAMATIC
Know it all cold?
Or lank with acedia?
Share and be bold;
Come build Wikipedia.
— Anon.
54) Haibun
Japanese form, pioneered by the poet Basho, and comprising a section of prose followed by haiku. They are mainly travelogues.
Example: The Importance of Goldfish by Michael McClintock
55) Haiku
Haiku is a traditional form of Japanese poetry. Haiku poems consist of 3 lines. The first and last lines have 5 syllables and the middle line has 7 syllables.
Example:
the first cold shower;
even the monkey seems to want
a little coat of straw.– By Basho
56) Hamd
Hamd is a poetry in praise of Allah.
57) Heroic Couplet
A pair of rhyming iambic penta-metre line commonly used in epic and narrative poetry.
Example: Last two lines of Shall I compare Thee (Sonnet 18) by William Shakespeare
So long as man can breathe, or eyes can see
So long lives this and this gives life to thee.
58) Horatian Ode
Short lyric poetry written in two or four-line stanzas, each with its the same metrical pattern, often addressed to a friend and deal with friendship, love and the practice of poetry. It is named after its creator, Horace.
59) Hybronnet
The form name is derived from hybrid and sonnet.
60) Iambic Pentameter
One short syllable followed by one long one five sets in a row. Used extensively in sonnets
Example:
la-LAH la-LAH la-LAH la-LAH la-LAH..
61) Idyll
Poetry that either depicts a peaceful, idealized country scene or a long poem telling a story about heroes of a bye gone age.
Example  Tennyson’s “Ulysses”
62) Imagism
Name given to a movement in poetry aimed at clarity of expression through the use of precise visual images.
Example: “Autumn” by T.E. Hulme
63) Irregular (Pseudo-Pindaric or Cowleyan) Ode
Neither the three part form of the pindaric ode nor the two or four-line stanza of the Horatian ode. It is characterized by irregularity of verse and structure and lack of correspondence between the parts.

Italian sonnet
A sonnet consisting of an octave with the rhyme pattern abbaabba followed by six lines with a rhyme pattern of cdecde or cdcdcd. Petrarch is chief exponent of this style.
64) Juiju
These poems are always quatrains or more specifically a matched pair of couplets.
65) Kakuhb
Kakuhb is a stanzaic Sanskrit form.The defining features of the Kahuhb are: stanzaic, written in any number of tercets, 3 lines or padas. syllabic,8-12-7 syllables, unrhymed.
Example:
The beast sleeps awhile, undisturbed,
a rumble of discontent murmurs from within
as familiar lips explore.
Lampoon
Scurrilous, satirical poem.
Example: John Wilmot’ famous epitaph for Charles II
Here live a great and mighty king
Whose promise none relies on
He never said a foolish thing,
Nor ever did a wise one.
66) Lanterne
A type of poetry that has one syllable in the first line, two syllables in the second line, three syllables in the third line, four syllables in the fourth line, and one syllable in the fifth line that related to the first word of the poem.
Example:
boys
tackling
running fast
scoring touchdowns
lads
67) Lay
A long narrative poetry, especially one that was sung by medieval minstrels.
Example:
“The Lay of the Last Minstrel” by Walter Scott
68) Lento
This poetic form is created by Lencio Dominic Rodrigues. A Lento consists of two quatrains with a fixed rhyme scheme of abcb, defe as the second and forth lines of each stanza must rhyme. To take it a step further, but not required, try rhyming the first and third lines as well as the second and forth lines of each stanza in this rhyming pattern: abab, cdcd. The fun part of this poem is thrown in here as all the FIRST words of each verse should rhyme.
69) Light Poetry
Light poetry, also called light verse, is poetry that attempts to be humorous. Poems considered “light” are usually brief, and can be on a frivolous or serious subject, and often feature wordplay, including puns, adventurous rhyme and heavy alliteration.
Example: “Light” by Rabindranath Tagore
70) Limerick
A limerick is a humorous poetry consisting of five lines. Lines 1, 2, and 5 of have seven to ten syllables (three metrical feet) and rhyme with one another. Lines 3 and 4 have five to seven (two metrical feet) syllables and also rhyme with each other. The rhyme scheme is usually “A-A-B-B-A”.
Example:
There once was a very sad daddy
Whose golf game was going quite badly.
He looked left and right
No ball was in sight
I think that he needed a caddy
71) List
A poetry that is made up of a list of items or events. It can be any length and rhymed or unrhymed.
Example:
Hello
Fall!
Apples
Jack
o’lanterns
Apple
cider
Apple pie
Brown
Yellow
Red
Leaves
Costumes
72) Lyric Poetry
The term lyric poetry actually comes from the term ‘lyre’, a musical instrument. Lyric poetry expresses personal emotion or thoughts of the speaker just like the song.
Example: P.B. Shelley’ s “ode to the West Wind”
73) Madah
Poem written in praise of royalty, patrons, etc.
74) Mandakranta
This sanskrit term means ‘a lady slowly approaching’. Hence it refers to ‘a slow stepper’ and is said to employ erotic mysticism.  Stanzaic, written in any number of quatrains. metric, all lines strictly carry the same heavy and light metric pattern which is established by the first line (this is language specific). In English, it is easier to simply consider the verse syllabic, 17 syllables per line. One source suggested a syllable count of 17-16-17-17 unrhymed which seems to to be the most popular consensus.
Example:
‘O God, the lord of this world, the shining one.
I recall with my mind the feet of Ramachandra.
like the crescent of the risen moon.
You (clouds) are filled with water;
they (buildings) have bejeweled floors.
You are at lofty heights; they kiss the skies.
composed with caesura, which appears twice, once after the 4th syllable and again after the 9th or 10th syllable.
75) Manqabat
A poetry written in praise of members of the family of the holy Prophet .
76) Marsiya
In Urdu language an elegy written to mourn the death of a great man or a dearly loved person.
77) Masnavi
Masnavi, in the majority of cases a poetic romance. Mir and Sauda wrote some of this kind.
78) McWhirtle
A light verse form similar to a double dactyl, invented in 1989 by American poet Bruce Newling.
79) Monoku
A haiku in a single horizontal line.
80) Mono-rhyme
An identical rhyme on every line, common in Latin and Arabic. “aaaaa…”


Also Read My Articles on:
If you have any types of poetic form you must let me know. Please share your precious views and comments. Thank you.