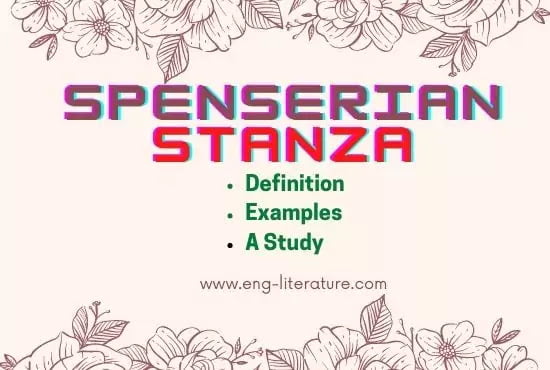 The Spenserian Stanza is named after Edmund Spenser, the inventor of the style for its unique stanza pattern. The harmony of the nine line stanza (called the Spenserian stanza), consisting of eight iambic pentameter and one iambic hexameter (called the Alexandrine) with the rhyme scheme of ab ab bc bc c, contributes largely to the creation of Spenserian Sonnets. In addition, the stanza ‘adapts itself reading to the different demands of narrative, descriptive and moral poetry’. Its verbal musicality reaches a high point with the use of onomatopoeia, alliteration, assonance and rhyme. The unified lyric tone and the fairyland setting serve an additional function by bringing the digressions into single harmony.

A glaring example of Spenserian stanza is discovered from Book I of The Faerie Queene by Edmund Spenser:

“A gentle knight was pricking on the plaine,
Ycladd in mightie armes and silver shielde,
Wherein old dints of deepe woundes did remaine,
The cruell markes of many a bloody fielde;
Yet armes till that time did he never wield:
His angry steede did chide his foaming bitt,
As much disdayning to the curbe to yield:
Full jolly knight he seemed, and faire did sitt,
As one for knightly jousts and fierce encounters fitt.”

The romantic poets make full use of Spenserian stanza in their poetry. Byron’s Childe Harold’s Pilgrimage, Keats’s “The Eve of St. Agnes,” and Shelley’s “The Revolt of Islam” and “Adonais.” Shelley is perhaps the greatest master of the Spenserian stanza after Spenser himself. Here is the third stanza from “Adonais“:

“Oh weep for Adonais-he is dead!
Wake, melancholy Mother, wake and weep!
Yet wherefore? Quench within their burning bed
Thy fiery tears, and let thy loud heart keep,
Like his, a mute and uncomplaining sleep;
For he is gone where all things wise and fair
Descend. Oh dream not that the amorous deep
Will yet restore him to the vital air;
Death feeds on his mute voice, and laughs at our despair .”

The Victorian poets were not far behind of using Spenserian stanza. Lord Alfred Tennyson uses this in his poem, “The Lotos Eaters”.

“Courage!” he said, and pointed toward the land,

“This mounting wave will roll us shoreward soon.”

In the afternoon they came unto a land

In which it seemed always afternoon.

All round the coast the languid air did swoon,

Full-faced above the valley stood the moon;

Along the cliff to fall and pause and fall did seem.

Edmund Spenser stands among the greatest writers of Elizabethan period whose precious contributions fashioned new tradition in English literature. Spenser’s rich and vigorous imagery and careful treatment of metrical structure left a profound influence on the succeeding poets and ensured his place as one of the seminal literary artists in the flamboyant field of English literature. Spenser reached the highest pinnacle of his art and invention with his romantic tour de force The Faerie Queene. It has been hailed as Spenser’s masterpiece, the supreme triumph of the poetic art in English literature.

The Faerie Queene is written in the Spenserian Stanza, a form which the poet himself invented as a suitable vehicle for a long narrative poem. Suggestions for its construction were taken from three Italian metres – the Ottava Rima, The Terza Rima (The Sonnet) and the Ballade Stanza. The Spenserian Stanza is characterized by eight lines of lambic Pentameter followed by one line of lambic Hexameter, or an Alexandrine.

“a gen/ tle Knight/ was prick/ ing on/ the plaine”

followed by one iambic hexameter, or Alexandrine (six accents). e.g.

The rhymes are arranged in the following order: ab ab be bcc. It will be observed that the two quatrains are bound together by the first two b rhymes, and the Alexandrine, which rhymes with the eighth line, draws out the harmony with a peculiar lingering effect. In scanning and reading it is necessary to observe the laws of accentuation and pronunciation prevailing in Spenser’s day.

The rhythm of the meter is also varied by the alternating of end-stopped and run-on lines, as in the last quotation. An end-stopped line has a pause at the end, usually indicated by some mark of punctuation. A run-on line should be read closely with the following line with only a slight pause to indicate the line-unit. The use of alliteration, i.e. having several words in a line beginning with the same letter, is another device frequently employed by Spenser for musical effect, e.g.

“In which that wicked wight his dayes doth weare.”

Like Lyly, Marlowe, and Shakespeare, Spenser felt the new delight in the pictorial and musical qualities of words, and invented new melodious and word pictures. He aimed rather at finish, exactness, and fastidious neatness than at case, freedom, and irregularity, and if his versification has any fault, it is that of monotony. The atmosphere is always perfectly adapted to the theme. The peculiar diction of the Faerie Queene should also receive the careful attention of the reader. As a romantic poet,

Spenser often preferred archaic and semi-obsolete language to more modern forms. He uses four classes of words that were recognized as the proper and conventional language of pastoral and romantic poetry; viz. (a) archaisms, (b) dialect, (c) classicisms, and (d) gallicisms. He did not hesitate to adopt from Chaucer many obsolete words and grammatical forms. Examples are: the double negative with ne; eyen, lenger, doen, ycladd, harrowd, purchas, raught, seely, stowre, swinge, owch, and withouten.

He also employs many old words from Wycliffe, and Langland, like swelt. Younglings, noye, kest, hurtle, and loft. His dialectic forms are taken from the vernacular of the North Lancashire folk with which he was familiar. Some are still a part of the spoken language of that regions, such as, brent, cruddled, forswat, fearen, forray, pight, sithen, carle etc.

Notwithstanding Spenser’s use of foreign words and constructions, his language is as thoroughly English in its idiom as that of any of our great poets. Leigh Hunt says:

“After reading a canto of Spenser two or three days ago to an old lady, between seventy and eighty years of age, she said that I had been showing her a gallery of pictures. I do not know how it is, but she said very right. There is something in Spenser that pleases one as strongly in old age as it did in youth. I read the Faerie Queene when I was about twelve, with infinite delight, and I think it gave me as much, when I read it over about a year or two ago.”

The reader hears in its lines a stately and undulating rhythm that intoxicates the ear and carries him on with an irresistible fascination, he sees the unsubstantial forms of fairyland go sweeping by in a gorgeous and dreamlike pageantry, and he feels pulsing in its luxuriant and enchanted atmosphere the warm and beauty-loving temper of the Italian Renaissance.