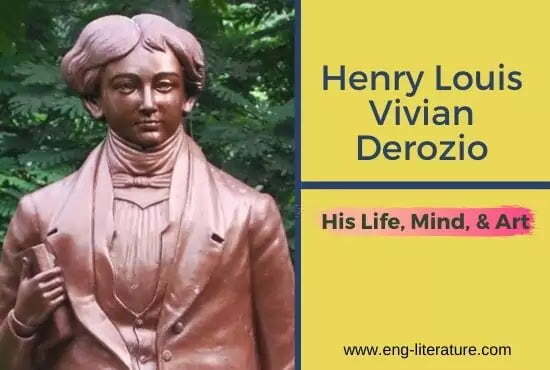 H.L.V. Derozio was born in Calcutta in 1809. He is generally regarded as the father of Indian English poetry. He has a mixed origin of Portuguese and Indian family. His father was Portuguese and his mother Indian. At the age of fourteen he became a clerk in a firm, but he did not take interest in the job. By the efforts of Dr. John Grant of Calcutta, he became a teacher of English Literature at Hindu College. He wrote several beautiful sonnets, lyrics and long poems. His work “The Fakir of Jungheera” has a Byronic touch. It describes “Nuleeni’, a Brahmin widow and her various ups and downs due to her star-crossed life.

In one of his lyrics, “My Native Land”, Derozio presents a very beautiful picture of both the past and the present of India. He imagines India as an eagle whose feathers are chained and so the kingly eagle is groveling in the dust. His sonnet, “Poetry” deals with his concept of poetic creation. Like the Romantic poets of English Literature, he strongly believed in the passionate love for Nature, nostalgic attachment to the past traditions, and customs, the mildly journey of dream and imagination. In his poem, “Poetry”, he gives the epithet “sweet madness” to poets which reminds us of Shakespeare’s famous poem, “The Lunatic, the Lover, the Poet”. He observes :

“Sweet Madness when the youthful brain is seized.

With that delicious phrenzy which it loves,

And then through all creation mildly roves”.

H.L.V. Derozio was richly influenced by the Romantics like Byron, Keats, Scott and Moore. He was also very much influenced by the patriotic and revolutionary poems of P.B. Shelley. He seems to be very fond of sonnets. Some of his sonnets are very rich in both feeling and form, matter and manner. He had also a great love for natural descriptions

Apart from his shorter poems and sonnets which contain human emotions in beautiful language, today he is most famous for his classic work The Fakir of Jungheera. It describes a Brahmin widow, Nuleeni, who is star-crossed. It also shows her undeserved sufferings and untold miseries. Prof. K.R.S. Iyengar rightly observes:

“It is competent narrative verse with many Byronic echoes, and the ardent social reformer, too, peeps through the poem with a face contorted by pain and also lit up with a hope for the future. The rock of Jungheera is in Derozio’s time, was the haunt of Fakirs or wandering monks. Just when Nuleeni is about to be consumed by the flames on the funeral pyre of her dead husband, she is carried away by the Fakir, her former lover and the Chief of the outlaws, and she has a brief new lease of life.”

My song, and my lute,

The lute that soothed sweetly

Of Love, thy wild car;

The song of Love’s raptures

You once loved to hear!

From my deep bed of coral

And left my green chambers

For dawn in the sea!”

His sonnet “To the Moon” shows that the trials and tribulations of the earth is beautifully reflected in the gloomy face of the moon. The poet seems to represent himself as the embodiment of misfortune and misunderstanding while the moon stands for hope. The phrase ‘grief upon thy cheek’ is very suggestive). The word ‘grief here seems to suggest the dark portion of the moon.

H.L.V. Derozio is also a great poet of nationalistic zeal. His poems like “My Native Land“, “The Harp of India“, “To the Pupils of Hindu College” beautifully deal with patriotic feelings. These poems are suffused with the elements of patriotism and so E.F. Oaten rightly gives the epithet “The National Bard of Modern India” to Derozio. M.K. Naik rightly observes:

“A note-worthy feature of Derozio’s poetry is its burning nationalistic zeal, somewhat surprising in a Eurasian at a time when the average representative of his class was prone to repudiate his Indian blood and identify herself with the white man, for eminently practical reasons.”

Poems like ‘To India, My Native Land’, ‘The Harp of India‘, ‘To the Pupils of Hindu College’ have an unmistakable authenticity of patriotic utterance which stamps Derozio as an Indian English poet who is truly a son of the soil. Derozio is also a pioneer in the use of Indian myth and legend, imagery and diction (though he also employs allusions, western classical myths with equal competence): e.g. ‘Highest Himalay’ (Poetry): ‘Chandra’s beams (‘The Eclipse’); ‘Sweet Sitar (Song of the Hindustani Minstrel’) etc.

Thus H.L.V. Derozio is a great poet in Indian poetry in English. His poems have exercised a great influence on the later poets. What matters most in his poetry is his deft and skillful art of blending both feeling and form together. His apt use of metaphor, his short and epigrammatic presentation, his patriotic zeal and above all his connotative and aesthetic presentation will always be remembered by the connoisseurs of art and literature.