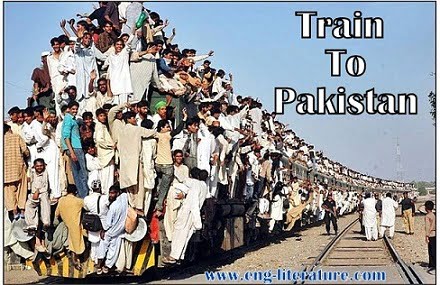 Khushwant Singh’s novel Train to Pakistan is all about the holocaust that took place in 1947 when India was divided into two countries – India and Pakistan. Partition has left many scars in the hearts of several Indians. The memories and wounds of the tragic period still make people shiver. The book was first published in 1956 when in the backdrop the horrendous memories of the holocaust were still afresh. Khushwant Singh puts the microscope on the then Indian society through his spokesman, Iqbal to criticise different evil customs that were running rampant. The novel begins with a reference to the Hindu Muslim riots that had torn the nation and set the fire of communalism and terrorism.

The entire novel revolves around a small village named Mano Majra, half miles away from the river Sutlej. Lala Ram Lal is the only Hindu family. He is money- lenders by profession. The money-lenders indeed where fleecing the poor and needy people; they were in line with the Zamindars in perpetrating cruelties on the poor. The British government did nothing to save poor from these wolves. But they were the targets of dacoits because dacoits could get large booty from their houses­- the ill-gotten money was taken away by the doctors. In Mano Marja dacoity is committed in the house of Ram Lal and is killed cruelly.

Singh speaks about the unhygienic condition of the Indian. They spit and urinate everywhere. But the Indians keep sexual morality above everything else. Meet Singh complains that the Christian men and women go freely with other men and women, hinting at wife swapping. Iqbal snubs him for harping on the stock opinions, saying that Christian don’t tell lies as the Indian do.

The police in India are indeed incorrigible lot making nuisance all the time. In the name of giving common public a peace, they stand as a nightmare. Iqbal complained, “There is a police system which, instead of safeguarding the citizen, maltreats him and lives on corruption and bribery.” Iqbal himself become a victim of police high-handedness. He is stripped to see whether he is a Muslim, and arrested for no offence. Police is unjust in the case of Jugga too. Without any real evidence they put Jugga behind the bar.

Lack of social injustice in India thrusts people into a world of crimes. Unemployment is largely responsible for that. Nobody wants to know why a man has to resort to thieving or robbing. A workless person has no option other than stealing. When he does so, society labels him as criminal. He is not brought back to the mainstream of the society. A large part of Indian population is half-fed, half-clad. There is no surprise if people become Nexalites or Maoists or even dacoits.

Indian Judicial system is violently criticised. Laws are violated by the law-maker, lawyers. Hukum Chand, a Magistrate is a counterfeit who gets his promotions and jobs of his relatives through foul means. But he is adored as a man of virtue by Meet Singh and all. It is Indian tendency to oil a man who holds high position irrespective of his character. Hukum Chand asks the inspector to send singers, rather prostitutes, for his entertainment. Even at the age of 50, he listens romantic music and flirts with the girls of his daughter’s age. Wine and woman are his main obsession.

Interestingly the irony is that the Indians of lower strata didn’t even know what independence is, the time when India was fighting for freedom. A Muslim says “Freedom is for the educated people who fought for it. We were slaves of the English, now will be the slaves of the educated Indians – or the Pakistanis.” Speaking about freedom Lambardar asks Iqbal “Will we get more lands or more buffaloes?” What a travesty of independence!

Unlike Mahatma Gandhi’s opinion, Iqbal would always believe that Independence is not the only remedy to receive social justice. Iqbal notices that the Indians were uneducated, superstitious, backward living people. Disparity is seen everywhere. Iqbal notices the youths of Punjab are all alike in their choice of bride – “All wanted virgin”. Beauty, they recognised was skin-deep. Most people wanted to correspond with horoscope. Since love is the strongest bond between two souls, Indians have several considerations in choosing life partners.  They look for the dowry, qualification and the job prospects of the bride.

Communal discords had a inglorious past in India.  Sikhs didn’t have much faith on Muslims as they had “executed two of their Gurus”. Muslims butchered their infants, forced them to convert into Islam, tore their holy Granth and even raped many Sikh women. Now a train load of Sikh’s massacred by the Muslims had been cremated in Mano Majra. Two Sikh young men are determined to take avenge to give lesson to the Pak.

The novelist has established a criticism of Indian culture, attitude, customs, and philosophy through Iqbal. But he is not fully upright in his philosophy all time. As a stern communist he can’t think beyond “roti, kapra, and makan” (fooding, clothing and lodging). But he is right to say that Indians depends on faith more than logic and argument: