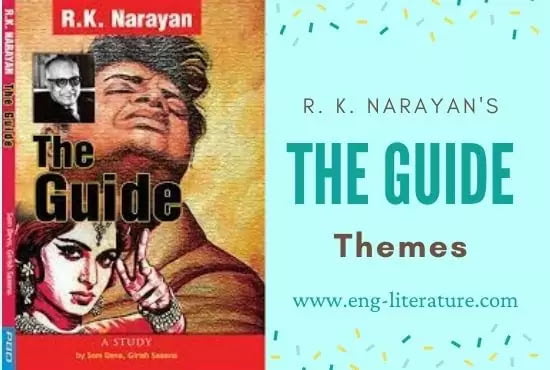 The main theme is implicit in the title of the novel, The Guide. Raju, the railway guide becomes a tourist guide, Rosie’s manager and dancing guide, a prisoner’s guide and finally a prisoner’s guide and finally a spiritual guide. It is r of the growth of a petty guide to a spiritual guide. Raju’s movement from childhood to death symbolize the journey of a common man the story of the growth of a from ignorance to knowledge, from selfish love to altruism, from materialistic involvement to spiritual detachment from vanity to modesty. However Raju’s role as a guide can be regarded from various points of views, each encompassing other themes or messages.

According to some critics, the major theme of all novels of Narayan is Malgudi– the depiction of lower middle class lives. As rural town of porters, small businessmen, teachers, and beggars, it grows into a tourist town with varied interests. Malgudi is a typical Indian town changing from a semi agricultural town to a big city and this change is symbolic of the change taking place in India. Narayan depicts how traditional values are being corroded and how adherence to tradition brings about spiritual rebirth.

Theme of Love, Sex and Marriage

The Indians of his background lead to stress on family and its various relationships. The relationship between Raju’s parents, his fear of his father, his closeness to his mother, the differences arising out of Rosie are all depicted vividly. Velan’s story also reflects on family relationships, as after his father’s death, he has to perform the duty of getting his sister married. The theme of family automatically leads to a stress on the theme of marriage. Raju’s mother is concerned about his marriage. She wants to get him married to his cousin. Velan also marries his sister to his half-cousin. As a brother, he has the duty of getting his sister married. Rosie though educated, is a ‘devadasi’ and has to marry Marco for social security. It is an unhappy marriage since there is no parity in their ambition, love and sex.

This results in Rosie’s seduction by Raju who satisfies her ambition to be a dancer. Her major focus is on her career and not on her physical relationship. She never accepts Raju as a substitute for her husband. She feels guilty and pines for her husband. With Narayan, sex is not a dominant theme but is used bring out the irony of character and life. His characters Raju and Rosie are left alone for rejecting moral sanctity. Thus his treatment of love and sex is in keeping with his middle class Indian setting.

Raju and Rosie’s sex relationship becomes a money relationship. Narayan emphasizes the importance of money. In this novel money haunts most of the characters. Raju’s father runs a shop for money. Raju becomes a guide for money. His seduction for Rosie is also prompted by his greed for money. He accepts countless contracts on her behalf for the sake of money. It is his greed that results in the forgery of Rosie’s signature and his consequent downfall. The lawyer also centres round the money theme. However Rosie loves art for art’s sake and has no greed for money. Marco loves his art more than money. Velan also is not money-minded but likes to get spiritual peace.

While dealing with the theme of family, marriage, sex and money, Narayan basically deals with human relationship in society. He gives the message that those who deviate from these human relationships get destroyed. Raju deviates from conventional morality by living with Rosie, a married woman. He is spurned by society and his mother leaves him. His journey of life from a tourist to a Swami results in his becoming spiritually reborn.

Narayan thus makes it clear that life must be lived in spite of follies and vanities, money, sex or marriage.