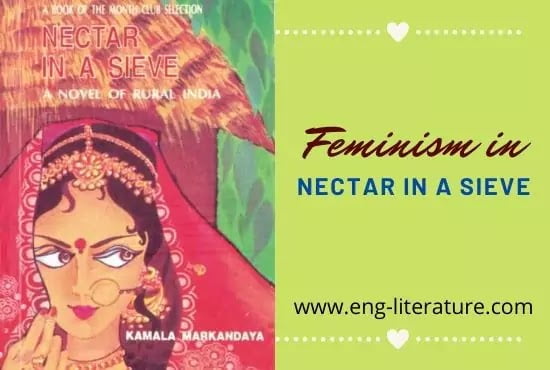 Feminism and Gender Consciousness in Nectar in a Sieve

“Life is a challenge”. It has to be met. The cliched saying is far more true in the case of a woman. For a woman life is always a challenge and since ages she has been subjected to the many challenges thrown by society, customs, traditions and men.

Tradition, the world over, has assigned a lower and subordinate position to women in it’s social set up. However important the functions and duties of a woman are, she is always relegated to the background. And woman is obliged to subordinate her interests and desires to the collective will of her community, and in particular to the male members. These constricting and narrow social norms constrained her to obliterate her ‘self’, her individuality and separate identity.

Change is the law of life, and the status of women all over the world has been undergoing a rapid change in recent times. Traditionally, the Indian woman accepted the frame work of the family with a blind faith and rarely, if ever, showed a spirit of rebellion. But times have changed and the women of India too are taking strides though slow at the moment towards attainment of selfhood, independence and personal dignity.

The post independence era in the Indo-Anglican novel marks a striking departure from the traditional depiction of the female as but I weak, dependant adjunct to her counter parts in society. It is an obvious advancement. A galaxy of women novelists have sprung up, a remarkable phenomenon by itself. These women novelists have contributed to the development of the Indo-Anglian novel by an inclusion of new themes, with special focus on the issues that concern women, their joys and sorrows, ills and blessings.

Indian literature of the earlier era has depicted woman as one who is docile, self sacrificing, the very embodiment of self less love and a veritable monument of patience, ever willing to suffer. Such virtues are highlighted as the virtues of true womanhood, the virtues of a “pathivratha”.

The Smrithis, the Puranas, even the Epics and Vedas speak of woman’s lower position. It is a man made world, and woman is bound within the narrow confines prescribed by man. This kind of male chauvinism resulting in female enslavement has been a set feature of Indian society, since ages. However, with the spread of education, wider exposure to society, both at home and abroad, woman in the Indian context, has been able to achieve a breakthrough from the shackles of ages-old servility and subordination.

This aspect of woman’s life has been portrayed by the women writers with sensitivity and understanding. Today, we may boldly assert, a woman writing is a woman fighting. She is fighting for her rights, for truth, for honesty, for identity, for freedom and for equality. The muted voice has freed itself, and come on stage to air the concerns of the hitherto neglected, ill treated and ignored “other gender”.

Literature of the post-independence era of our land clearly marks the creativity release of the feminine sensibility. There is a long line of women writers of eminence like Kamala Markandaya, Nayantara Sehgal, Ruth Prawer Jhabwala, Anita Desai, Santha Rama Rau, Attia Hussain, Padmini Sengupta, Nargis Dalal and a host of others. Among these Kamala Markandaya is the most outstanding critical and creative artist. An insightful and eminent critic, Dr. A. V. Krishna Rao, holds her in high regard. He has said:

“Kamala Markandaya’s novels, in comparison with those of her contemporary women writers, seem to be more fully reflective of the awakened feminine sensibility in modern India as she attempts to project the image of the changing traditional society.”

Kamala Markandaya’s first novel “Nectar in a Sieve”, was published in 1954. In this novel, (which is to celebrate the Golden Jubilee Year of it’s publication soon), Markandaya deftly deals with the pains, pleasures, sufferings and the heart burning problems of women through the character of Rukmani. Rukmani in ‘Nectar in a Sieve’ is a memorable character. She typifies, in her exemplary conduct her character, traditional Indian womanhood. She suffers but is not inclined to rebel against the traditional values.

She has used Coleridge’s famous lines as the epigraph of her novel on rural India. It is subtle, richly allusive and at once strikes the keynote of the entire novel and it’s basic theme:

“Work without hope draws nectar in a sieve,

And hope without an object cannot live.”

“Nectar in a Sieve” is an enactment of these lines. Rural life is like nectar in a sieve. It is a comment on the waste of all human endeavour sustained by hope, a hope to collect the nectar of happiness in life, all slipping through. The placid rhythm of rural life is disturbed by the intrusion of the urban culture.

The traditional culture of Rukmani’s village, it’s simplicity, its slow and calm beauty and innate human values is destroyed by the intrusion of modernity. The nectar of life of the rural spread is drained and the staleness and stink of the affluents from that emblem of modernity, the tannery, stay to corrupt and condemn. Labour, gruesome and unrewarding labour stays. Hope is drained and the nectar of life is elusive. It is a veritable rape of innocence.

This tension between tradition and modernity pervades and entire novel, and through this conflict remains unresolved, there is a silent acceptance of change. People have to acquiesce into modernity. The idyllic rural ambiance is rudely ruptured, familial loyalties strained, if not totally shattered and migration to the urban wilderness begins.

Kamala Markandaya’s main focus, which she effectively presents, is the predicament of women in these situations. Her Rukmani, no doubt, is a triumph of the spirit of tradition. She is the archetype; the ideal idolized the adored woman of Indian tradition. True to the traditions of an Indian woman, she shows exemplary’ patience and fortitude and an ungrudging acceptance of the reality of her situation.

The force of tradition is operative in the way the birth of the girl is viewed in the family. The birth of a girl is looked upon with resignation, if not with sorrow. It is the male child that keeps up the father’s line and saves the family from ‘Punnama Naraka’. A barren wife is pitilessly ill-treated in the tradition bound Indian society and this is a universal phenomenon. Mother of a male child is welcome and mother of a female child is not. Rukmani suffers the ignominy of both, for sometime. To her great disappointment, her first born child is a girl and in anguish she cries;

“I turned away and despite myself, the tears came, tears of weakness and disappointment, for what woman wants a girl for her first-born?”

One assumes that under the impact of this shock, she stays unproductive and barren for sometime. After sometime her first male child is born. Ira and Arjun are followed by many children, all males, Thambi, Murugan, Raja, Selvan and Kutti. Rukmani, soon discovers that children do not necessarily contribute to the happiness of the family nor do they invariably ensure a woman the promised joys of motherhood.

The vagaries of nature bring in famine through heavy rains and floods and starvation stares in the face of the family. It is again the woman’s burden to find the where withal to feed the family. Rukmani starts petty trading. She sells vegetables in the market to eke out a living to feed her children. Soon the urban civilization makes its inroads into the rural life shattering the placid rhythm of its life. The tannery intrudes and disrupts the family. Much against her will, her eldest sons join the tannery as workmen and soon after they leave her and the country and migrate to Ceylon. Murugan too betrays her and shifts to the city, in search of livelihood. Raja dies and Kutti falls ill. The compulsions of their situation force ‘Ira’ to become a prostitute and Nathan is evicted from his land by and landowning zamindar.

With the patience and fortitude instinctive with traditional Indian womanhood Rukmani braves these adverse circumstances in her life and leaves the village along with her husband for the city to start life a new with her son Murugan there. In the city, Nathan falls ill and dies and Murugan could not be traced in the city. Widowed now, and betrayed by her own sons on whom she lavished her all, the native returns to her village in the company of Puli an orphan boy who she has befriended during her sojourn in the city.

Rukmani is a straightforward and hard-working peasant woman of the Nectar in a Sieve. But hunger and poverty crush the spirit in Rukmani. Time has changed and women the world over are fighting for recognition in the face of stiff resistance offered by man. Rukmani is an example of suffering wife and patient mother. Yet, she is the first pioneering female protagonist who raises her voice of protest against the repressive practices.

Iconoclastic upheavals are not new phenomena in our world. Old order has to yield place to new order. Rukmani’s heroic struggle against repressive traditional social structure is the central focus of this novel.

Kamala Markandaya’s Rukmani is the forerunner of the modern woman to liberate herself from the debasing, obviously oppressive and totally irrelevant traditions. She lived her life within the bounds of the traditions of her social order and yet she has shown that she was fully alive to the inequity and injustice of it all.