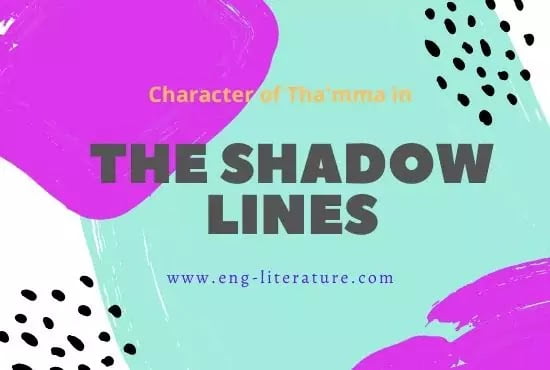 Character of Tha’mma in The Shadow Lines

Tha’mma is the protagonist in Amitav Ghosh’s novel The Shadow Lines.  She was narrator’s grandma. Born in Jindabahar in Dhaka in a joint family, she grew up when the Indian National Movement was gaining a militant note and fight against the British was jointly being spearheaded by Mahatma Gandhi and the militant nationalists together. Tha’mma was quick tempered with a deep sense of freedom. She is proud, stubborn and strong-willed. She along with Ila is an itinerant character.

Her dislocation is a product of her circumstances. She is perplexed at the history that has led her place of birth to be so messily at odds with her nationality and has made her a foreigner in her hometown, Dhaka. She relates an incident of her college life of 1920s when one of her classmates was arrested by the police for revolutionary terrorism who looked shy and frail but had a great resolution and unrepentence for serving the cause of national freedom. Tha’mma so fervently wished to help him in any way she could, right from cooking the food to washing the clothes. She states that she could even have killed the British and the Police Officers for freedom.

She gets married to a man who gets postings in the neighboring countries and leaves Dhaka and goes to different places before finally coming down to Calcutta after her husband’s premature death from pneumonia. She takes up the teaching job in one of the local schools and continues to serve there for twenty-seven years and retires as a Principal in the year 1962. It was with this job that she brings her son up and takes pride in her refusal for help from anybody especially from her rich sister Maya Devi.

Tha’mma is a strict disciplinarian who was very punctilious about the right use of time and lost her temper if anybody wasted it. This was one of the reasons for her disapproval of Tridib and his waste of time.

The second person that did not find her favour was Ila, the daughter of her sister Maya Devi. For her, Ila is firmly outside the pale of sobriety and common Indians, her looks and her clothes were inappropriate to her Bengali middle class origins: ‘Her hair cut short like a bristle on the tooth brush, wearing tight trousers like a Free School Street whore’, she comments. Her concept of freedom is quite different from that of Ila.

Tha’mma is a steadfast nationalist. She is in love with her place of birth in Dhaka and cannot forget it in any way. The partitioned India and the line drawn between Calcutta; her present place of stay and Dhaka does not make any sense to her. She comes to realize that borders have a weak existence and not even the history of bloodshed can make them truly impregnable.

She is undiplomatic and straight. For her, it is either this way or that but no in between. She had believed that she would be able to see the borders between India and East Pakistan from the plane.

She had long believed that nostalgia is a weakness. ‘It is everyone’s duty to forget the past and look ahead and get on with building the future’, she used to say. But one in Dhaka, she understands the harsh reality of the border and realizes that dislocated people like her have no home but in memory. Stunned by her nephew Tridib’s death by a riotous mob in Dhaka she develops a great hatred for Pakistanis. She gifts away her only necklace, the last remembrance of her husband to the war fund so that the Bangldeshi army may fight them properly at last with tanks and guns and bombs. She says to her grandson ‘For your sake, for your freedom.’

Her concepts of nationalism, nationhood and the formation of Indian state are quite clear and forceful. It is observed in her perception of her early days when she saw, felt and experienced the tremors of British imperialism. Her sense of freedom and nationhood was sharpened. She tells her grandson—It took those people a long time to build that country; hundred of years, years and years of wars and bloodshed. Everyone who lives there has earned his right to be there with blood: with their brother’s blood and their fathers ’blood and their sons’ blood. They know they are a nation because they have drawn their borders with blood. That is what it takes to make a country. Once that happens people forget they were born this way or that, Muslim of Hindu, Bengali or Punjabi. They become a family born of the same pool of the blood.