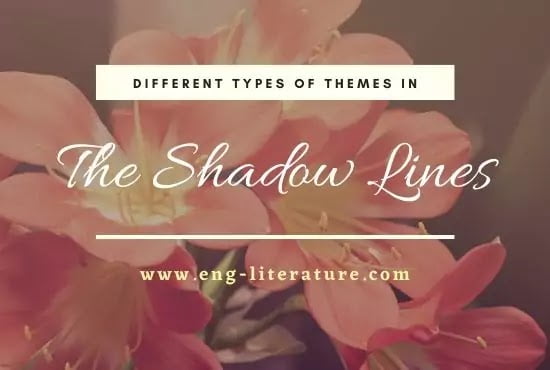 The Shadow Lines hosts a number of themes. The first and foremost being that it is an attempt to draw the attention of the world to do away with borders that divide the people. Humanity after all is the same everywhere and any attempt to create differences is not only hazardous but also futile. There is nothing on earth that can divide a memory. Many lines and borders may be drawn but it can never set people free of their reminiscences, free of their associations, free of the love and a sense of belonging for their place of birth.

The second thing it considers is how many of these lines can be drawn or divisions made. It is all a mirage. The world cannot be divided into innumerable small stages to satisfy the urge of the people to give their frantic sense of nationalism a political entity and a name. In Indian context, first it was the creation of Pakistan then the demand arose for Punjab, the North East and then Kashmir. Partition or secession is no solution. It may on the other hand trigger never ending hostilities and violence. There can be no better example than India.

Narrator believes in the reality of space, that the distance separates but is sadly mistaken. These borders that are drawn are mere shadow lines according to the author, which often play a role opposite to what they are actually meant to. They reflect not the differences but the similarities and interdependence.

Tha’mma is another example in the novel who cannot bring her to adjust to the fact that her freedom of movement has been restricted by the line that we call border. Her Dhaka is still very alive and colourful in her memory as it was before in reality until Tridib’s killing in Dhaka. There are a good number of instances, which show a good fusion of language, culture and counties to bring home the point that the earth after all is like one country. But at the same time The shadow Lines is also a warning for the cultureless identity. Ila is a burning example.

Another theme of the novel is the concept of nationalism that is gaining ground in today’s world. The author has held the extreme form of nationalism responsible for many a problem these days. The separatist and secessionist tendencies are the outcome of it. Love of the country, passion inspired nationalism and intoxication of patriotism cannot but lead to jingoism. Thus nationalism which had and which has great uses can become the greatest obstacle to world peace. This tribal instinct has been magnified beyond all measures resulting in political and economic megalomania. And the novel in its enthusiasm to prove the point has gone a little too far to proclaim that nationalism is a defunct force and in this background Tha’mma is ridiculed as ‘a still surviving specimen of fossilized nationalism.’

Time and distance are taken to be shadows. The novel makes a smooth transition from present to the past and from past to the future without causing any friction. The novel highlights the reality of the frictions people create around their lives.

Characters in the novel intermingle not as members of a distinct culture but as complex individuals in a world where geographic boundaries have truly becomes the shadow lines. These boundaries are like a mirror that seems to reflect not their differences but their similarities. May Price falls in love with Tridib and Nick marries Ila.

The Shadow Lines besides dealing with some serious themes is also a picturesque novel. It deals with crowded, shabby and traffic-torn Calcutta with road side vendors and petty shopkeepers to picturesque and clean London; from traditional matriarchs to liberal and friendly Prices; giving snippets of was torn Germany and England. It captures the swinging moods, whims and fancies of the people of scenic Kashmir and its inhabitants-innocent and pure.

The novel highlights the two polarities of human nature. While there can be people on whom sense prevails and they mould palpably volatile situation to their control, there just may be another section which would make a mess of it and the human blood so spilled would shine in the flickering flames of the torched houses. Mu-I-Mubarak is just the kind of incident, which establishes the above fact.

The Shadow Lines sparks off a debate between tradition and modernity. Good fences make good neigbhours and limitations or fences are the touchstone of sanity is put under a test. The characters by whom the two concepts are conveyed are strong ones. Both are the radical women. One is rooted in tradition the other in modernity. On one hand we Tha’mma, a radical, and nationalist rooted in tradition but despised and mugged at invariably for nurturing primitive or supposedly orthodoxed views in the context of the modern day scenario. Ila represents to a great extent the modern cosmopolitan world, and is a free high flying girl, a girl without barriers, hurdles and stops. The borders have long seized to exist for her.

The Shadow Lines is therefore not a solution to modern diaspora but is certainly an attempt to make an appeal to the think tanks of the world; leaders and intellectuals to spare a thought on the philosophy of the novel; to do some hard thinking and put some sense and sanity into the minds of the people.