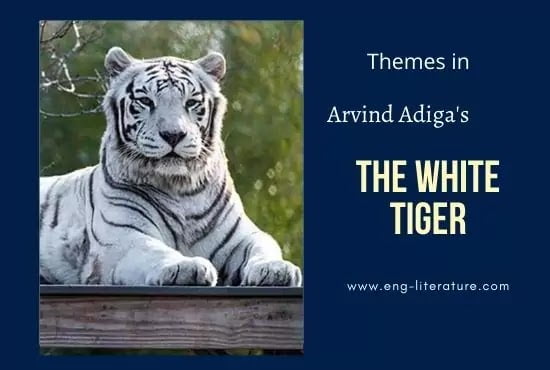 The White Tiger provides a darkly humorous perspective of India’s class struggle in a globalized world as told through a retrospective narration from Balram Halwai, a village boy. In detailing Balram’s journey first to Delhi, where he works as a chauffeur to a rich landlord, and then to Bangalore, the place to which he flees after killing his master and stealing his money, the novel examines issues of religion, caste, loyalty, corruption and poverty in India. Ultimately, Balram transcends his sweet-maker caste and becomes a successful entrepreneur, establishing his own taxi service. In a nation proudly shedding a history of poverty and underdevelopment, he represents, as he himself says, “tomorrow.”

The novel is based on layers of themes. Here are a few :

The White Tiger takes place in the modern day world where increased technology has led to world globalization, and India is no exception. In the past decade, India has had one of the fastest booming economies. Specifically Americanization in India has played its role in the plot, since it provides an outlet for Balram to alter his caste. To satisfy Pinky’s want for American culture, Ashok, Pinky, and Balram simply move to Gurgaon instead of back to America. Globalization has assisted in the creation of an American atmosphere in India. Ashok justifies this move by explaining “Today it’s the modernist suburb of Delhi. American Express, Microsoft, all the big American companies have offices there. The main road is full of shopping malls—each mall has a cinema inside! So if Pinky Madam missed America, this was the best place to bring her”. By blackmailing Ram Parsad, the other driver, Balram is promoted and drives Ashok and Pinky to their new home.

Ashok is even convinced India is surpassing the USA, “There are so many more things I could do here than in New York now…The way things are changing in India now, this place is going to be like America in ten years”. Balram is noticing the rapid growth as well. From the beginning of his story he knows that in order to rise above his caste he should become an entrepreneur. Although his taxi service is not an international business, Balram plans to keep up with the pace of globalization and change his trade when need be. “I‘m always a man who sees ‘tomorrow’ when others see today.’” Balram’s recognition of the increasing competition resulting from globalization contributes to his corruption.

A white tiger symbolizes power and majesty in East Asian cultures, such as in China and Japan. It is also a symbol for individualism and uniqueness. Balram is seen as different from those he grew up with. He is the one who got out of the “Darkness” and found his way into the “Light”.

In an interview with Aravind Adiga, he talked about how “The White Tiger” was a book about a man’s quest for freedom. Balram, the protagonist in the novel, worked his way out of his low social caste (often referred to as “the Darkness”) and overcame the social obstacles that limited his family in the past. Climbing up the social ladder, Balram sheds the weights and limits of his past and overcomes the social obstacles that keep him from living life to the fullest that he can. In the book, Balram talks about how he was in a rooster coop and how he broke free from his coop. The novel is somewhat of a memoir of his journey to finding his freedom in India’s modern day capitalist society. Towards the beginning of the novel, Balram cites a poem from the Muslim poet Iqbal where he talks about slaves and says “They remain slaves because they can’t see what is beautiful in this world.” Balram sees himself embodying the poem and being the one who sees the world and takes it as he rises through the ranks of society, and in doing so finding his freedom.

Balram is from a low caste in India where he grew up with barely anything. As a child, Balram was seen as an intelligent and honest fellow in a crowd of thugs. He was a pure soul and was untainted. However, growing up, he was exposed into a lot of corruption and immoral behavior, such as the time with the doctors just let his father die. His childhood ultimately set Balram up for a lifetime of immoral and corrupt behavior as he moved up his social ladder and into the higher castes. To work his way up, Balram ends up cheating, stealing, and even murdering in order to have his way. Balram becomes very selfish, evident by his many immoral actions, due to the entrepreneur/ businessman side of him. This can be seen as both an immoral and moral, depending on how you look at it. If one looks at it in a more business lens, business is all about doing everything one can to beat out whoever one are competing against. Finding ways to ensure the competition does not succeed, finding ways to get ahead of everyone else, and coming out on top are all a big part of the business world. It can be seen as being moral because of competitive nature of our globalized capitalist economic system. In a capitalist economy, any way one can get ahead is fair game. However, if one is looking at this from a non-business standpoint, the actions Balram does are very immoral. He cheats people to put himself in a position to gain for himself. Balram does everything in his power for personal gain, even killing his boss.

The book shows a modern day, capitalist Indian society with free market and free business. It also shows how it can create economic division. In India there are not social classes, there are social castes. The novel portrays India’s society as very negative towards the lower social caste. Balram refers to it as the “Darkness”. When Balram was asked which caste he was from, he knew that it could ultimately cause a biased stance in his employer and determine the future of his employment. There is definitely a big difference seen in Balram’s lower caste from back home and his current higher caste in their life-styles, habits, and standards of living. This novel is showing how our economic system today creates socioeconomic gaps that create a big division in society. It limits opportunity, social mobility, health, and other rights and pleasures that should be given to all. There is a big difference in the amount of money spread around in society today and this book is alluding to that fact.

To save their reputation and the marriage, the family has to take out a loan from the Stork. Balram is forced to drop out of school and work in a teashop to help raise money to pay back the debt – triggering the events of the rest of the story. His cousin’s wedding is not the only marriage that disrupts Balram’s life. When Pinky Madam leaves for New York, Mr. Ashok sinks into depression. In addition to drinking and womanizing, he finally accepts his family’s dirty business, ferrying bribes for The Stork. Balram joins in his boss’ decline – eventually murdering Mr. Ashok to pocket the bribe himself.

In an interview with The Guardian, Adiga emphasizes the importance of family in Indian society. “If you’re rude to your mother in India, it’s a crime as bad as stealing would be here,” he explains. For Balram to abandon his family, then, is perhaps his greatest crime. “This is a shameful and dislocating thing for an Indian to do,” Adiga remarks of his protagonist. Balram also understands the severity of his actions. Fear for his family is the largest obstacle he must overcome to carry out Mr. Ashok’s murder. In the days before, he has visions – imagining abuffalo in the street blaming him for the deaths of his family. Even after he becomes a businessman in Bangalore, he goes to the temple to pray for their spirits.

At the beginning of the novel, Balram mentions to the Premier that China is the only nation he admires besides Afghanistan and Abyssinia. Why? Because he read in a book called Exciting Tales of the Exotic East that these are the only 3 countries never to be ruled by outsiders. He dubs China the “freedom-loving nation,” a place that has never been subject to a master-slave relationship with the West. But although he hears on All India Radio that “you Chinese are far ahead of us in every respect,” Balram observes that China does not have entrepreneurs – hence the Premier’s visit to Bangalore. China, then, becomes a foil to India, which he describes as a nation with “no drinking water, electricity, sewage, public transportation …” but chock full of entrepreneurs. For this reason, Balram tells the Premier his story, believing that China and India are destined to become the next great superpowers. “In 20 years’ time, it will just be us brown and yellow men at the top of the pyramid, and we’ll rule the whole world.”

Perhaps Balram’s favorite motif is the duality of “Light” and “Dark.” From the very beginning, he attempts to navigate from his hometown in “The Darkness” to become a member of urban society. Light, then, becomes a multifaceted symbol of time (the future), wealth (lots of it), location (Bangalore), and obligation (none) – while Darkness represents the past, poverty, rural India – and most importantly – loyalty to family and master. These themes battle each other throughout the novel. Even after he has established himself in Bangalore, he continues to seek ways to differentiate himself from the “Darkness.” When 1 of his White Tiger drivers runs over a boy, he visits the family and offers their surviving son a job. He realizes this decision may make him appear weak, but he argues he has no choice.

“I can’t live the way the Wild Boar and the Buffalo and the River lived, and probably still live, back in Laxmangarh. I am in the Light Now.”