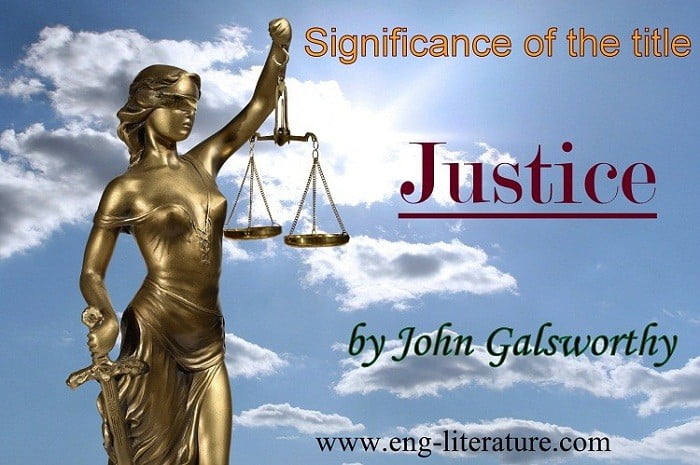 The title of the play is a deliberate choice of Galsworthy who intends to make it sound ironical. In fact, the main tune of the play deals with the crux of justice, or rather the edifice of justice that appears majestic and awe-inspiring, but in the name of justice it crushes the poor under its wheel. The title is an impassioned commentary on the legal system and the prison administration in a commercial society in which hypocrisy and false values heap injustices on the Falders and make them find peace in death.

Falder and Ruth are two representatives of those who are outcasts in a society only because they are poor. Neither the court of justice nor the inhuman society comes forward to protect them from the humiliating experiences and helplessness. Falder’s heart is large enough to bleed for Ruth who suffers all humiliations, miseries, ignominy, and atrocities of an unhappy life. His sympathy for her develops into passionate love and he is prepared to do anything to help her out of the hell, promising her a new life and a happy home away from that hell. But a poor clerk is too poor to realize this dream. So in his desperate bid to get money he commits forgery which is an immoral act in the eyes of the society and the custodians of law. Nobody pays any heed to the plea that to save Ruth Falder could not but forge the cheque. James How does not accept the plea of his son, Walter that Falder should be given a chance. In his blind adherence to the moral values of a decadent, oppressive society he hands Falder over to the guardians of Justice.

Ironically the judge and the jury find Falder guilty of two offences – forgery and immoral relation with a married woman, and sentence him to a solitary imprisonment. The society and the legal system have little interest in human passion and sympathy for suffering; the wheel of justice has no eyes to see the wounds it inflicts on the trapped. Nobody is interested in knowing what led Falder to forge and why Ruth found her life with her husband unbearable. In fact, Justice puts the judge and the jury in the dock because they never cared to stem the rot in the system.

The title of the play actually sneers at the law that only too often nurtures the forces of injustice and hurls Falders down the precipice to their death. Falder wants to save Ruth from hell, but he finds himself in hell when he is thrown into prison. The frustrating experiences leave Falder demoralized and desperate, and failing to clutch at the straw he loses faith in life itself. Even in the prison cell the fate of Ruth haunts him, for he knows that there is none to help his Ruth. But then Falder is a human. James How and the judge do not see thing in his light. They, in their anxiety to save the majestic edifice of law and society forget to temper their judgment with mercy, though they are very much keen in praising the Christian piety. The consequences of all these are extremely horrifying.

With Falder we all are prisoners in our cells and we all suffer and share the shame of the victims, for we are all equally helpless before the majestic institutions that hold our world to ransom. As Falder is bewildered in his defeat, he despairs of a future, for his alienation of the society and his nightmarish experiences make him stray even from Ruth. And it is in that angle of this the significance of the title should be read. When he comes out of the cell and finds himself free, he still clings to life and tries once again to share it with Ruth. But ‘Justice’ doesn’t give him respite. So he jumps to his death and gives law the slip, saving himself from further onslaught of ‘justice’. Thus the circle of irony is complete.