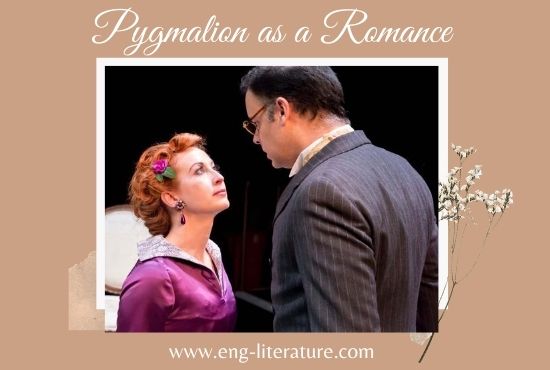 Pygmalion as a Romance

Bernard Shaw has called the play Pygmalion, and added a subtitle to it, “A Romance“. As is well known, Shaw was an anti-romantic and in one play after another he has punctured age-old romantic notions. Thus in his Arms and the Man, he has shattered the romantic notion of love and war, and in his Man and Superman he has shown that it is the woman, and not the man, who is the courter and the chaser. It is the woman who chases her man relentlessly and ultimately marries him. Beauty and sex appeal of a woman are shown to be a trap to capture the man who is likely to make a suitable father and husband.

Thus Shaw is an anti-romantic, an iconoclast, and this is true of the present play also. No doubt the transformation of shabby dirty and cockney Speaking flower girl into a fascinating lady, fit enough to pass for a Duchess even in the garden party of an ambassador, is romantic enough, in the sense that such ‘creations’ are not usual but Pygmalion cannot be regarded as a romance, because in it the heroine Eliza, does not marry Higgins, the hero.

The transformation of Eliza is romantic enough, but the play does not have e conventional ending of a romance, for the hero and the heroine are not in love and are not happily married at the end. Rather, the heroine throws the slippers of the hero into his face, and goes out of his house in anger. Higgins’ interest in Eliza is merely scientific and it comes to an end as soon as he has achieved success in his experiment. He is cold and scientific and not at all a lover.

The Note of Romance

However sexual love is an essential element in a romance and this element of romance is provided by the Freddy-Eliza love-story. Freddy fall deeply in love with Eliza when he meets her at the house of Mrs. Higgins is simply fascinated by her and from that day onwards he begins to how Wimpole Street where Eliza lives in Higgins’ house. Freddy keeps looking at Eliza’s room every night until the lights go out, when he says: “Good night darling, darling, darling.” Freddy thus becomes a love-lorn man.

When one night, Eliza comes out of Higgins’ house because she can no longer endure his neglect and bullying, she encounters Freddy in the street and asks him what he is doing there. Freddy replies that he spends most of his nights here in this street because it is the only place where he feels happy. He then tells her that she is the loveliest, the dearest being for him; and then, losing all self-control, he smothers her with kisses. She, hungry for comfort, responds fully to his love-making; and they stand there in the street in each other’s arms till they are interrupted by a police constable.

The lovers then flee from that spot and halt at another place where again they embrace each other but are once again interrupted by another police constable. Eventually, they get into a taxi and spend the rest of the night driving about the town. Subsequently, Eliza tells Higgins that Freddy has been writing very lengthy love-letters to her and that she has decided to marry him. Now, this whole episode is romantic even though it appears only towards the end.

In the Appendix which Shaw has added to the play, he has told us that Higgins could not love and marry, because he was a scientist, and because no woman could come up to the level of his mother who was his ideal, and to whom he was deeply attached. We may say that he was the victim of “Oedipus complex” even though he lives apart from his mother. Similarly, Eliza could not love and marry Higgins because the Life Force working within her prompted her to love and marry Freddy, who is young and healthy, and so is likely to make a better father for her children. Indeed, throughout the play, there is no sexual attraction or talk of love between Eliza and Higgins.

Thus the play is not a romance in the sense that the hero and the hero fall in love and are happily married in the end. According to A.C. Ward,

“Pygmalion is not a romance, as it could rightly have been called if Higgins and Eliza had fallen in love and married. It is a problem play, and the goes much deeper than the bare story told in Pygmalion. Every sets out to fight ignorance is in a similar position with regard to his pupils as Higgins was with regard to Eliza. He leads them towards a new way of life and is compelled to leave them at its threshold to go on by themselves.”

But the element of romance is provided by the creation of Eliza into an entirely new ‘creature’ and the Eliza-Freddy love-story.