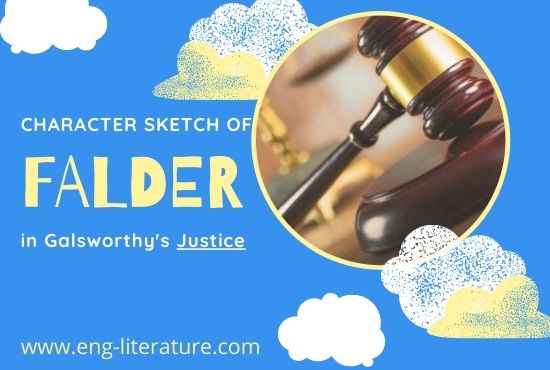 Though Falder is not a hero in the Aristotelian or Shakespearian sense, the entire dramatic action of Justice emanates from him, right from the first Act. Everything happens around him; he claims all our attention, sympathy and pity. He does everything and suffers not for himself, but for Ruth Honeywill. But even then we find him an unheroic hero whose tragedy is never grand and sublime, whose suffering and fall do not inspire awe. If we admire him, it is because he is victim of a social injustice which we all resent. He does not stir our deeper emotions beyond pity which is aroused by the spectacle of waste.

Falder is a young clerk of twenty-three. He is pale, good looking, but a bit timid and nervous. He is soft-spoken and nice, but rather weak and pensive. He gives us the impression of a scared young man who is constantly haunted by something he has done in a desperate bid to save a married woman. But in spite of all this he has a heart of gold that bleeds to see others suffer. When he sees Ruth languishing in her hell, waiting only to be throttled to death by her cruel husband, he tries to assuage her agonies and gives her his sincere love which is warm enough to make the unhappy woman dream of a new, happy home with Fader. He considers his love for Ruth very precious and he does not have much qualm to forge the cheque with a view of building a happy home for Ruth.

Falder never thinks of being dishonest, he hates swindling and all his life he has learnt to preserve the integrity of his character. But when he sees no alternative to forging the cheque he sacrifices his honesty and integrity at the altar of his love for Ruth, for he considers this love more precious and above anything else. All along he has remained faithful and devoted to Ruth, not because he pities her, but because his love for her pervades his entire existence giving it both succour and meaning in an otherwise drab and dreary world. He is prepared to sacrifice his life to see her happy and he actually does it without any remorse.

In the office he is liked by all in spite of his weakness. His meekness and sincerity endear him to others, and Cokeson and the Hows do not have anything to complain about as long as he is in the office But when it is impossible for Ruth to stay with her husband, he frantically tries to get the money necessary for paying their travelling expenses to a far-away land where he dreams of giving Ruth a happy home. He is really in a daze while altering cheque, and when he realises what he has done he does not let his qualm scare him away from his pledge to Ruth. As he has promises to keep, he does not think of rest. His only thought is about Ruth, and he silently shelves his scruples. He alters the counterfoil of the cheque he has forged only to prevent detection before he leaves the country with Ruth. He knows that Davis is already beyond anybody’s reach, and, so, even if the forgery is detected, no harm can touch him. But, as ne is not an adept, he is caught on the very day he has planned to leave. However, James How and Cleaver do not see this reason. The judge and the jury too find him guilty; he is found to have committed forgery deliberately, in a planned way. Hence he is sentenced to penal servitude.

Falder, in his solitary cell, is a broken man ; the price he is made to pay is too heavy for a weak young man like him – it shatters him completely and even robs him of his faith in life. When he comes out of the prison he finds himself without a shelter and without a living. Even the doors of his own sister’s home is closed before him; no employer would have him in his office. The stigma of being convicted once appears to be too large to be rubbed out. He is an outcast in his own society. But even then he does not forget his Ruth, though now he is sceptical of being of any use to her. When again they meet, Falder seems to have regained his lost hope, for Ruth is still there as helpless as ever.

Cokeson and James How help him dream again, for they agree to give him another chance. But James has one condition : he must sever his relation with Ruth and keep away from her. Falder refuses to do that, he cannot give up one for whom he has suffered so much. However, Ruth is quite agreeable to How’s suggestion and tries to persuade him to reason. But Falder will not be persuaded. At last James relents and does not insist on his condition as forcefully as he does in the beginning. But the society never stops chasing Falder with a vengeance, the law never gives him the respite even though he has done nothing to malign it. He is caught in a vicious web and even James How fails to extricate him when the custodian of the legal system comes to pounce upon his prey for not reporting himself at the police station.

Falder knows that it is no use struggling, for he cannot get away from justice. Each time he tries to live, the society hurls him down the precipice and he is made to Crawl under its wheel only to get crushed in the process. So, only to flee this society, Falder jumps to his death. It is his only bold attempt to give ‘justice’ the slip, and it helps us see the rot.

The pathos in Falder’s character moves us all to pity, but he does not emerge as a tragic hero in the true sense. There is little grandeur in his suffering; even his death leaves him pathetic. He represents the frustration of the modern man who is constantly baffled and harassed by the false values of a heartless commercial system.