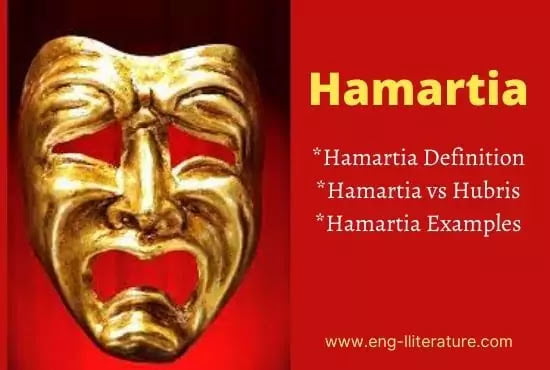 Hamartia, according to Aristotle means error of judgement. In tragedy, the hero should be a person “neither eminently virtuous nor just, nor yet involved in misfortune by deliberate vice or villainy, but by some error or human frailty.” Thus a tragic hero is not wholly virtuous, because the tragedy of such a man would be shocking and disgusting. He is not wholly bad because the tragedy of a bad man will not move us to pity and fear. His punishment will be a poetic justice. A tragic hero therefore is a great man with a flaw in his character. His misfortune is the result not of vice or depravity but some error of judgement which Aristotle called Hamartia. Therefore Hamartia is an error which is derived from “ignorance of some material fact or circumstance”.

According to Aristotle, in tragedy “

(2) a bad man from misery to happiness. The first situation is not fear-inspiring or piteous, but simply odious to us. The second is the most untragic that can be; it has none of the requisites of tragedy: it does not appeal either to the human feeling in us or to our pity, or to our fears. Nor, on the other hand, should

(3) an extremely bad man be seen falling from happiness to misery. Such a story may arouse some human feeling in us, but it will not move us to either pity or fear: pity is occasioned by undeserved misfortune, and fear by that of one like ourselves; so that there will be nothing either piteous or fear-inspiring in the situation. There remains then the intermediate kind of personage, a man not pre-eminently virtuous and just. whose misfortune, however, is brought upon him not by vice and depravity but by some error of judgement of the number of those in the enjoyment of great reputation and prosperity e. g., Oedipus, Thyesbes and the men of note of similar families”. (Poetics, Bywater’s Translation)

Thus it is pointed out here that the tragic hero must be neither “a good man” nor “a bad man”, but an “intermediate kind of personage”, neither preeminently virtuous or just nor pre-eminently vicious or wicked, one “in the enjoyment of great reputation and prosperity”. He is a big man and a great man with yet a flaw in character: his misfortune is the result not “of vice or depravity” but of “some error of judgement”. “hamartia”
in Aristotle’s language. Hamartia etymologically means missing the mark.

In Greek tragedy, hubris means the pride or overweening confidence that leads the heroes to ruin. It makes the hero disregard the moral warning or divine law. Hubris provokes Nemesis and Dike (Justice). Creon in Antigone is led by Hubris and in his overconfidence bans the divine edict of burial of the dead brother Antigone. Hubris is followed by Nemesis or Dike.

Hamartia and Hubris are related concepts. Hubris is the pride that causes the error of judgement. Tragic heroes are carried away by an overmastering passion or pride that leads them to their tragedies.

However, it must be noted that in Greek tragedies, characters are guided by divine commands and they rush to pre-determined end shaped by the gods. They may have illusions about their conduct but the tragedy is not precipitated by their errors Oedipus’s pride is his hamartia and generates his fierce rage and obstinacy. Oedipus sets in motion the whole train of action which aims to discover the polluted person and so release Thebes from the plague. But he is ignorant of the circumstance that he has killed his own father, Lius. Thus his hamartia is derived from ignorance of caterial factor circumstance. This ignorance makes him proud and passionate so as to be insensitive to the Divine oracle that Tiresias the prophet has told him. His contempt of the prophet and his taking him to be a conspirator with Creon is the height of his pride and passion.

Agamemnon’s desire to appease the gods is his hamartia. Clytemnestra is overmastered by a passion to kill Agamemnon and so is Orestes. Medea is similarly overtaken by passion to kill her children to take revenge on her husband. These passions lead to their errors of judgement which cause their tragedies. All these characters are ignorant of the material fact. Hamartia is connected with Peripety and Anagorisis hang together in the ideal schematisation of tragic plot.

In the cases of the tragic heroes of Shakespeare, the concepts of hamartia and hubris are applicable. Macbeth is ambitious this is his hamartia. But this alone is not responsible for his tragedy. The victories in the battles that saved Scotland from disaster, the meeting with the witches at the psychological moment of his life, and the instigations of his ruthlessly ambitious wife aggravate his ambition and carry him forward to his tragic destiny to which is impervious as he proceeds on his criminal career. Thus his error of judgement that he can secure throne and Security is derived from the ignorance of material cause or circumstance and leads him to over-confidence (hubris) which consumes his judgement. In all tragedies, the heroes are led by overweening passion (hubris) and are blind to the consequences, or if not blind (as Macbeth) is carried away by a force that makes him heedless to the consequences.

Othello murders Desdemona in his frenzy of jealousy: King Lear divides his kingdom among his ungrateful daughters in this frenzy of egoism. Their pride and passion distort their judgement- wisdom consumed in self-confidence. Prof Subodh Sengupta suggests that Aristotle’s hamartia does not apply to Oedipus, Agamemnon, Medea and also to Macbeth, Othello and Hamlet. Oedipus killed his father in ignorance, not out of error of judgement ; Agamemnon killed his daughter, Iphigenia by divine command; Medea killed her children to take revenge on her husband. Macbeth is depraved by his ambition ; Othello and Hamlet are pre-eminently virtuous, but their tragedy is caused by a certain quality that is a part of their nobility and not a hamartia. But hamartia, as Aristotle thinks is this quality in the nobility of the characters. It is in the action of the drama that the hamartia or hubris have found out. Oedipus becomes more and more proud and obstinate because he is ignorant of the material cause : his obstinacy is both his hamartia and hubris. Macbeth becomes more and more ambitious and proud and is carried by an overweening passion.

Othello becomes jealous, and his jealousy is whetted exercise his judgement to test what Iago insinuates against Desdemona, King Lear’s judgement is so vitiated by his egoism that he cannot distinguish between his wicked daughters and his loving daughter. The errors are generated by this pride and passion which intensify as the action proceeds resulting in the tragic disasters for the heroes.

Dr. Smart has challenged the view of Aristotle that a wholly innocent person cannot be the hero of a tragedy (Essays and Studies Vol. VIII). He points out that the Four Gospels present a history of suffering inflicted on perfect Innocence. They have been read with the deepest interest and the profoundest emotion. The stories of saints and martyrs in Christian literature have been for centuries with absorbing attention. Heroic greatness and perfect guiltiness are the secret of their power. Drinkwater has written a tragedy of Abraham Lincoln who is a blameless hero. Shaw’s Saint Joan is a poignant tragedy and Joan is a blameless character. In the Antigone of Sophocles one notices a refutation of Aristotle’s theory. She has to choose between contending duties- duty to religion and duty to the state. She sacrifices the lower duty to the higher.

Aristotle is however right in his assertion that a positively bad man cannot be the hero of a tragedy. Colossal villainy may dazzle our eyes but it does not touch the heart. In tragedy there must be a sense of waste. The misfortune that comes upon the hero is more or less undeserved. Iago cannot be a tragic hero but Macbeth can. Iago is wicked from the beginning and by nature. But Macbeth is at first noble ; he is ‘Valour’s minion’ and “Bellona’s bridegroom”. There is an impression that his essential self is disintegrated by his ambition and forces which he meets and which he cannot control. Macbeth’s life is tragic, it awakens a sense of waste. Shakespeare enlists our sympathy in his favour even when he murders.

Thus the precise task of the tragic dramatist is to “reproduce the distinctive features of a man, and at the same time, without losing the likeness, make him handsomer than he is” (Poetics). Of Shakespeare’s tragic characters, Bradley says that they “are made of the stuff we find within ourselves and within the persons who surround them. But by an intensification of the life which they share with others, they are raised above them.”