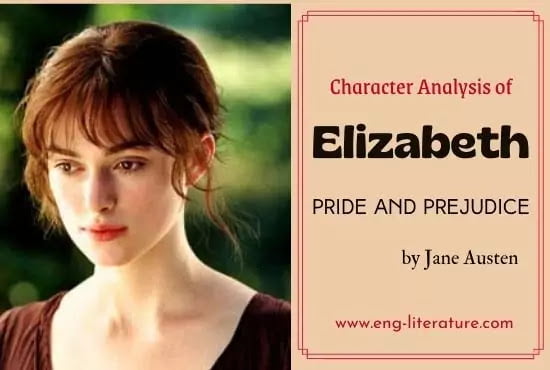 To create an entirely charming girl is one of the rarest achievements in fiction. Heroines who are noble or good or tragic or pathetic abound but Jane Austen has created in Elizabeth Bennet, a girl of charming wit, sense, honesty and warm heart.

Elizabeth Bennet captivates us by the sparkling freshness of a girl-next door. Of all her heroines Jane Austen herself, liked Elizabeth the most and in a letter to her niece Cassandra she wrote: “I must confess that I think her as delightful a creature as ever appeared in print.” And Jane Austen’s liking is borne out by countless other readers who have fallen in love with her for more than a hundred and thirty years. A.C. Bradley wrote, “I am meant to fall in love with her, and I do.” R.L. Stevenson was so enthusiastic about her that he said he wanted to ‘go down on his knees’ whenever she spoke.

Elizabeth Bennet is ‘not half so handsome as Jane, nor half so good humored as Lydia’ and yet she is charming. The real charm of the heroine is something elusive and indefinable. It is intrinsic. She has sobriety and depth – the beautiful expression of her dark eyes render her face uncommonly intelligent and Darcy who at the first meeting has dismissed her as merely “tolerable” at a later stage says, “it is many months since I have considered her as one of the handsomest woman of my acquaintance.”

Elizabeth’s charm arises to a great extent from her intricacy, her intellectual complexity. She is profound and perceptive with the ability to discern people and situations extraordinarily well: she comprehends the merits and deficiencies of the Bingleys almost at once; she knows Mr. Collins to be an affected fool from the first letter he writes and judges Lady Catherine de Bourgh correctly at the first meeting. She understands her family and is conscious of the vulgarity of her mother, the pleasant ingenuity of Jane, the listless pedantry of Mary, the empty-headedness of Kitty and impending dangers of Lydia’s flirtations.

Elizabeth’s Intelligence and Presence of Mind

There is a rare touch of vivacity and ebullience too about her. Witty and humorous she has the ready gift of repartee and a perfect command of epigrammatic expression. Her encounters with other characters give ample evidence of her quickness of mind. She is not intimidated by Lady Catherine and to her enquiry whether Darcy had made a proposal to Elizabeth she answers, “Your ladyship has declared it to be impossible”. She laughs always at follies and nonsense, at whims and inconsistencies but her wit is refined and subtle and never outruns discretion and she never ridicules what is wise and good. She is above all capable of laughing as much at herself as at others. She can humorously relate to everyone Darcy’s refusal to dance with her, and to Jane’s incredulity about her being happy in marrying Darcy. Thus, with her charming wit and intelligence she combines a sense of propriety and refinement.

Affable, warmhearted and selfless, she can walk all the way to Netherfield to care for her sick sister, Jane. She feels concerned at Bingley’s removal from the neighbourhood and much of her anger against Darcy is because of his role in causing the separation of Bingley and Jane. She constantly tries to raise Jane’s spirits and is genuinely happy when Jane is engaged to him.

Equally admirable is her moral courage in declining two marriage Proposals. She is a young unprovided girl. Her father’s estate is entailed on Mr. Collins. And in her society ageing maids were faced with a bleak future full of privations and humiliations. Mr. Collin’s proposal offers comforts and security of a home – by all means an attractive incentive. Mr. Darcy’s proposal is even more attractive, for even she realizes that to have been the mistress of Pemberley would be something. But with rare strength of character and moral courage she rejects these proposals. Her strength of character and independent spirit assert themselves at various places in the novel and she is able to hold her own against Darcy’s haughtiness, against Miss. Bingley’s conceit and insults and is calm and unruffled even in the face of Lady Catherine’s pride, refusing to be browbeaten by anyone of them.

But Elizabeth is no perfect heroine of a romantic novel. She is a complex, intricate, living and breathing character and Jane Austen achieves this depth by endowing Elizabeth with very human faults. Elizabeth has a pride and a vanity in her own perception, in her own intelligence and since her pride is mortified by Darcy’s refusal to dance with her, she is prejudiced against him. Her prejudice clouds her judgement and she is ready to believe Wickham‘s slanderous information about Darcy. She allows herself to succumb to Wickham’s charms because he is attentive to her and fails to discern his true nature. She is similarly, blind to Charlotte Lucas demerits and is surprised and dissatisfied at her readiness to marry Collins. Thus, while, Elizabeth is generally perceptive, she fails with the ‘intricate people who stand in a relationship of great intimacy to her.

However, Elizabeth is capable of learning from her mistakes. We see her change and this flux, this dynamism in her character is also responsible for the life-like charm she holds for us. The process of her self-awakening begins on receiving Darcy’s letters, after his proposal was rejected by her. She begins reading it, “with a strong prejudice against anything he might say”. But gradually she realizes the truth about his statements and now feels mortified at her own blindness:

“she grew absolutely ashamed of herself- of neither Darcy nor Wickham could she think, without feeling that she had been blind, prejudiced, absurd.”

This dramatic moment of self-revelation gradually brings about a total awareness of reality. She is quick to acknowledge her mistakes and feels guilty. She sees Wickham for what he is a charming, dissembling and unprincipled villain. She realizes too, that Darcy is exactly, the man, who, in disposition and talents, would most suit her.’ Her prejudice was wrong, but there was an element of honesty about it and we appreciate and love Elizabeth Bennet for this honesty.

It is true that Elizabeth blinds herself absurdly because of prejudice. She misjudges people who are close to her – Charlotte Lucas, Wickham and Darcy. But on the whole she is very perceptive and discerning of character – as in the case of Lady Catherine or Mr. Collins.

Thus, Elizabeth’s good sense and right feeling, her gaiety, high spirit and courage, wit and readiness, her warm-heartedness, her artistic temperament, her ability to laugh good-humouredly at herself, her intelligence and her zest for life all make her a charming and delightful heroine. Indeed the popularity of Pride and Prejudice as a novel rests on the brilliant portrayal of its charming captivating heroine – Elizabeth Bennet.