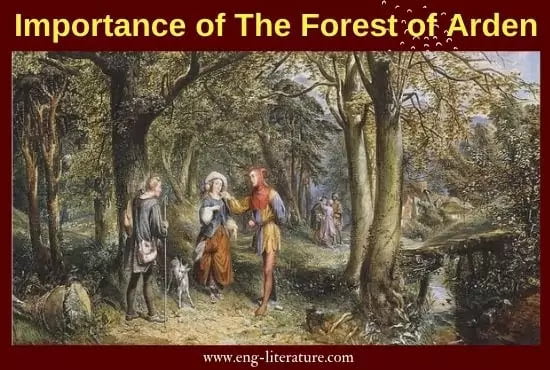 The Forest of Arden: An Imaginary Creation

The Forest has a great deal of influence on the people who stray into it. We see the shady dark green landscape in the background, and breathe in imagination the fresh air of the forest. The hours are here measured by no clocks, no regulated recurrence of duty or toil; they flow on un numbered in voluntary occupation or fanciful idleness, to which every one addicts himself according to his humour or disposition; and this unlimited freedom compensates all of them for the lost conveniences of life. One throws himself down solitary under a tree, and indulges in melancholy reflections on the changes of fortune; others make the woods resound with social and festive songs to the accompaniment of their horns.

Selfishness, envy, and ambition have been left in the city behind them. The wit of Touchstone is a dainty kind of absurdity worth comparison with the melancholy of Jaques. And Orlando in the beauty and strength of early manhood, and Rosalind– a gallant curtle axe upon her thigh, a broad spear in her hand, and the bright tender, loyal womanhood, within”- are figures which quicken and restore our spirits.

The Forest of Arden: A World of Moral Lesson

The banished Duke extracts some useful lessons from his life of banishment in the forest. He draws a contrast between the “painted pomp” of court life and the life of careless ease in the Forest of Arden. The life at court is full of envy, malice and ambition. But the forest life is sweeter and more “free from peril.” Of course the Duke and his followers suffer from the change of seasons. But even when he shrinks from the cold winter wind, he feels it is better than the flattering courtiers. While the courtiers at court are only enemies in disguise, the cold wind is an open enemy and does not flatter him. The Duke also realises the sweet uses of adversity. The forest life has many things to teach. Every object in Nature has a lesson of its own. He finds tongues in trees, books in the running brooks, sermons in stones and good in everything.

First Sight of Arden not Attractive

It is to be noted that the first impression of Arden is not very attractive to any of those who escape to it. “Well, this is the forest of Arden.” says Rosalind in apparently unenthusiastic tones. Touchstone calls himself foolish for having come there. Forest of Ardenne is no conventional Arcadia. It is not a place where the laws of Nature are abrogated and roses without thorns. Life’s roughness is very much in evidence in Arden. The herd abandons the wounded deer. Winter and rough other the season’s differences, the icy fangs and churlish chiding of the winter’s wind invade Arden. Nor does Manna fall to it from heaven.

The Forest of Arden: A Place of Discovery

The Forest of Arden, As You Like It is not untouched by the world of reality and its sorrows. But it is a place where those who come to it discover certain abiding truths about life. The characters get a conviction that the gay and the gentle can endure the rubs of fortune to find happiness in themselves and in others on this earth. The characters also realize certain truths. The masque of Hymen marks the end of this interlude in the greenwood, and announces the return to a court purged of envy and baseness. As in all comedy the characters realize the truth about themselves through trial and error, and the change is for the better. Thus Rosalind as Ganymede discovers she can play no more but must accept Orlando’s love. By loving a shadow, the mere image of a charming youth, Phebe discovers that it is better love than to be loved and scorn one’s lover.

Dramatic Significance of the Forest of Arden

Like Thomas Hardy’s Egdon Heath, Shakespeare’s Forest of Arden is not simply a background of the plot; nay it is itself a character, perhaps the most important character of the play.

“It has its own soul, a vital breath- that possesses the greatest reformative and constructive power. It reforms the wicked, selfish and cruel Oliver; it softens the aching hearts of the weary pilgrims, who come to it; it brings about a reconciliation between the Dukes, and finally, it is the Forest of Arden which unites the separated lovers-Orlando and Rosalind- infusing a spirit of love into other characters.”

Shakespeare’s Artistic Devices for Depicting the Forest of Arden

By a few strokes of the painter’s brush Shakespeare has succeeded in creating not only the appropriate pastoral background but also a vast and vivid woodland scene studded with some landmarks, e.g. the Duke’s cave, Rosalind’s cottage, the antique oak, and the crawling brook. So superb has been the success of this delineation that we seem to breathe ‘the very breath of the woods and the mountains’.

The world of Arden has not the celestial atmosphere of an unearthly region; this forest is emphatically real and feelingly earthy. It is subject to the change of seasons; eternal spring does not reign here. The struggle for existence is as acute here as in the city. The shepherd and the shepherdess are not ideal and innocent persons of the golden age breathing the idyllic atmosphere of Arcadia. A heartless coquette like Phebe and an ‘ill-favoured’ Audrey easily capable of deserting her true lover for becoming the snobbish wife of a courtier, are found to dwell within its extensive air.

“The sentimentality of the orthodox pastoral is entirely absent, and in its place we have the ruddy vigour, the leaping pulse and play of the open-air life that ‘loves to live in the sun’. Never has the charm of outdoor existence found more matchless expression.”