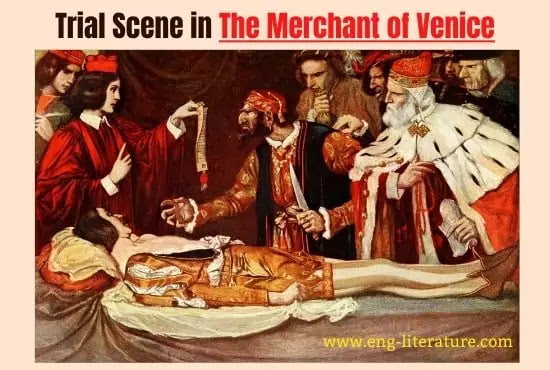 Trial Scene in The Merchant of Venice

The trial scene (Act IV, Scene 1) is the longest scene in William Shakespeare’s play The Merchant of Venice. It is the climax of the play where good prevails and evil gets punished. Although the trial scene is mainly about the punishment and saving of Antonio but there is a fight between Portia and Shylock. We can consider this play as a study of justice, mercy and revenge which we can surmise from the trial scene.

Everyone is concerned of the condition of Antonio in the trial scene. Shylock enters the court with a scale in one hand and a knife in the other hand to cut off one pound flesh from Antonio’s body. Bassanio is ready to pay twice or thrice of the money borrowed by Antonio from Shylock. Even the duke of the court is sympathetic to Antonio and wishes that Shylock forgives him from taking the flesh of Antonio. However, Shylock is not interested at this and he wants to only take flesh from Antonio’s body. He is not interested to listening anything about mercy and he wants revenge of all the insults he suffered from Antonio and every other Christian in Venice. He declares:

“If every ducat in six thousand ducats Were in six parts and every part a ducat, I would not draw them, I would have my bond!”

[The Merchant of Venice, Act-IV, Scene-1]

The arrival of Portia brings some hope to everyone. In disguise of a lawyer, she supports Shylock’s claim that Shylock has all the rights to take pound of flesh from Antonio’s body. Hearing this, Shylock gets praises her. However, Portia asks Shylock to cut off one pound of flesh only and not less or not more than one pound and also he has to cut off a pound of flesh without shedding a drop of blood. If Shylock shed one drop of blood, his lands and goods would be confiscated by the laws of Venice. Realizing the complexity of law, Shylock instantly asked for the money.

Finally, Portia requested the court to confiscate all the properties of Shylock for attempting to kill a Christian. According to the law of Venice, if any foreigner intends to kill any Venetian, he would be put into death. His penalty amounts to death sentence. To avoid the capital sentence, he would have to be converted into a Christian. At the end, Shylock loses his property and saves his life by consenting to be a Christian.

Conflict of the judgment of two religions

In the trial scene, we find the conflict of the judgment of two religions. According to Judaism (Jews religion), justice means punishing the bad people. Shylock feels that he has suffered. So, he must get an eye for an eye. According to Jews religion, eye for an eye or pit for a pit is the main idea of justice. So, Shylock wants this kind of justice. He wants one pound flesh from the body of Antonio as he feels that it is the exact justice for him after suffering a lot of insults from all the Christians including Antonio.

“But mercy is above this sceptred sway,

It is enthroned in the hearts of kings,

It is an attribute to God himself;

[The Merchant of Venice, Act-IV, Scene-I]

The trial scene of the play reminds us the moral lesson of showing mercy and not be cruel. Our prayer to God teaches us to be merciful. If we do not show mercy, our fortune may turn into misfortune anytime. However, the trial scene brings the theme of justice, revenge, mercy, love, marriage and friendship to the forefront. It reveals the true meaning of mercy, love and friendship.

The trial scene of The Merchant of Venice is actually a test for Antonio and Bassanio’s friendship. It is a test of love between Portia and Bassanio, Nerissa and Gratiano. They come out successful when put to the test. Antonio and Bassanio’s friendship doesn’t slacken. It also deepens the love between Portia and Bassanio. Last but not least, Portia’s dramatic twisting of law to save Antonio’s life from the clutches of Shylock once again bears a proof of Shakespeare’s ability to portray his heroine with the brilliance of his heroes.