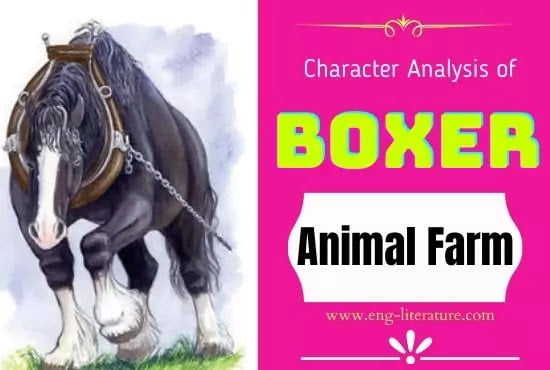 Boxer, “the willing horse”, represents the ardent, selfless party worker who will shed the last drop of his energy to aid his fellow’s well-being, who, at the same time, is extremely simple-minded and easily led. A white stripe down his nose gives him a somewhat stupid appearance. In fact he is not of first Intelligence; he is universally respected for his steadiness of character and tremendous stamina to work without murmur.

Boxer is nearly eighteen hands high and can easily turn out the work of two horses. His constant companion is the mare, Clover, who looks after him tenderly up to the last. The cynical donkey, Benjamin, also loves him and attends him, though he is far from being demonstrative in his love.

From the day old Major gives the signal for a co-operative farm of the animals, Boxer devotes all his energy and time to make the Animal Farm a success. His strength puts the farm on its feet after Jones’ expulsion. There were days when the entire work of the farm seemed to rest on his mighty shoulders. He gets the highest honours for bravery in the Battle of the Cowshed, but he is overcome with remorse when he believes he has killed a stable-lad; the building of the Windmill becomes an obsession with him, especially after the destruction of the half finished one; and once again in the Battle of the Windmill it is Boxer who plays a leading role. He is the main stay of the farm for all the harder type of work.

On the very first day, when Snowball throws into the fire the ribbons which were tied to horse’s manes on market days, Boxer consigns to flames the straw hat which he is in the habit of wearing in the summer in order to keep the flies off his ears. He is not curious at all to consider if this symbolic gesture helps the progress of the farm in any way. He is not to reason why, he is but to do and die.

Boxer’s great strength and energy are matched by his simplicity and dullness of wit. He is unable to master the alphabet, progressing no further than the letter D though he intends to devote his retirement to learning the remaining twenty two letters. Though vaguely troubled, he can think of nothing to say when Snowball is expelled, and he comes finally to accent without question the voice of authority, combining his motto ‘I will work harder with the maxim’ and ‘Napolean is always right.’

When the mass executions follow, he is at first non pulsed:

“I would not have believed that such things could happen on our farm”;

but the fault, he concludes, must lie in the animals themselves, and his solution is to work harder:

“From now on I shall get up full hour earlier in the morning.”

On one occasion, however, even the unsophisticated Boxer cannot swallow all the lies Squealer insists on handling out, and expresses doubt that Snowball was a traitor. He points out that Snowball fought bravely at the Battle of the Cowshed sustaining a wound, and was awarded the honour ‘Animal Hero, First Class‘. But Squealer dismisses it all away as not authentic. Boxer suggests that Snowball’s treachery might have developed only after being expelled from the farm but Squealer reiterates that Comrade Napolean has categorically declared that Snowball was Jones’ agent. At once Boxer submits, saying that Napolean is always right.

But the simple horse has unwittingly annoyed the dictator Napolean, and so when the latter orders the purge. Boxer is also one of the victims marked. Three dogs jump on the horse to tear him to pieces. But the hefty animal kicks two of them away and pins the third to the ground with his heavy hoof. The dog cries for mercy. Boxer looks at Napolean to know what he should do with the eccentric mastiff. Not for a moment Boxer suspects that the dog has been commissioned by Napolean himself. Napolean turns pale and sharply orders Boxer to let the dog go. Boxer, with no ill-will towards any one, lifts his hoof and the dog slinks away, his tail between his legs.

When Frederick‘s men blast the windmill, Boxer leads the animals in the unplanned attack on the humans. Three men get their heads broken by blows from Boxer’s hoofs. But when the men have been worsted and put to flight the firing of the gun causes Boxer surprise. Squealer explains that it was to commemorate their victory. But the slow brain of Boxer cannot understand what victory there was in merely regaining one’s own property. When Napolean himself declared it a grand victory and called the skirmish as the Battle of the Windmill Boxer stands to attention and salutes the flag,

In the course of the battle Boxer’s hoof gets injured. Clover dresses the wound with herbal poultice and Benjamin advises him to work less and rest more, But Boxer would not think of rest till the new windmill is completed. When his hoof gets healed, he starts working harder than ever. And then one summer evening while he is dragging a load of stone to the mill he slips and falls down between the shafts of the cart. He lied there, too exhausted to rise or even raise his head. Blood trickles from a corner of his mouth.

Other animals rush to him. Squealer, when informed, comes and conveys Napolean’s concern at the accident. Boxer is taken to the stall and Clover and Benjamin make him comfortable on a bed of straw. Squealer says that Napolean has arranged for a veterinary surgeon from Willingdon to cure Boxer. Two days later a van arrives on which is painted the name of a knacker. Clover gets anxious and calls Benjamin. By the time the other animals arrive the van has started off with Boxer inside it. Clover cries aloud to Boxer to get out and the other animals join in the cry. Boxer does try kicking on the sides of the van but his strength is not adequate now. The van disappears from the view and Boxer is seen no more. Napolean sold him to the butcher.

Boxer’s fate symbolizes the position of the ordinary, decent-minded but simple worker under an oppressive totalitarian regime. He has no retired life of rest and peace when his capacity to work is on the wane.