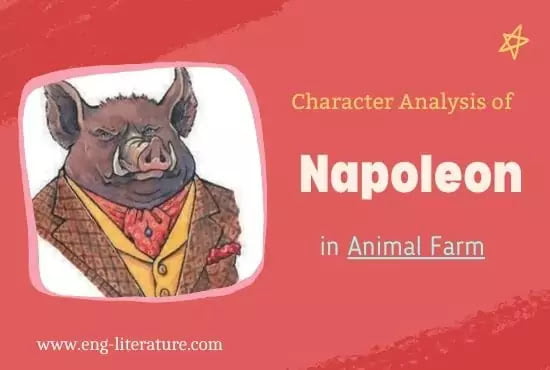 Animal Farm is the story of the rise to absolute power of Napoleon who is introduced in chapter 2 as a “large, rather fierce-looking Berkshire boar………..not much of a talker, but with a reputation for getting his own way.” True to the qualities of his French namesake celebrated in the French history, he does not believe in the word “impossible”. Himself a product of Animalism, he climbs to the top and abolishes Animalism, the very ladder by which he climbed to the pinnacle of power.

Napoleon’s chief skill lies in organizing the party machinery, He belongs to the intelligentsia among animals, and he uses his intelligence to achieve full dominance even over his own fraternity of pigs. He does not believe in abstract theories. His one object is to set his own supremacy on a firm footing and for this purpose he would adopt any stratagem, howsoever low and mean.

At first, Napoleon works in partnership with the other pig-leader, Snowball, in organizing the farm after the Mid-Summer Eve Rebellion. He took no part in actual fight, but once Jones and his men had been overthrown and expelled he took a hand in arranging for the change of name from ‘Manor Farm’ to ‘Animal Farm‘ and the writing down of the seven commandments on the wall. His inherent nature, however, is revealed in a minor incident which happened on the very day of the rebellion. Before the animals go to gather the harvest, the cows are milked and five buckets are filled with whole milk. Napoleon immediately takes the buckets into his possession and distributes the entire quantity of the creamy white stuff to the pigs. In this way, he ensures the loyalty of his caste to him.

Snowball has splendid notions about reforms for which purpose he forms a number of animal committees. But Napoleon takes no part in the plan. Again, when Snowball aims at spreading the message of rebellion to animals in other farms through pigeons, Napoleon counteracts the idea by stressing that defense of the Animal Farm against human attack should be their overall consideration. He believes in amassing guns and training the animals to fight. He thinks rather peculiarly that reforms are best implemented through younger generation. He takes into his custody nine new born puppies and brings them up secretly in the loft. They grow into large formidable dogs faithfully attached to Napoleon as his bodyguards.

It became a habit of Napoleon to oppose Snowball for opposition’s sake. Hence he opposed every measure that Snowball brings forward. But this opposition does not assume the form of open conflict and confrontation as long as there is a threat of attack on the farm by Jones. In the Battle of Cowshed, Napoleon does not appear on the fighting front. But once the battle is won he maneuvers to expel Snowball. He calls Snowball’s plan for a windmill as impracticable and urinates to the drawings. When the proposal finally comes up for voting and Snowball’s eloquent description of the benefits that will accrue to the animal community from the mill appeared to impress the animals. Napoleon opposes it with a brief ‘No’. But when the votes are about to be taken he utters a strange squeal. That is the signal for his dogs to attack Snowball and chase him out and away from the farm.

Napoleon consolidated his victory quickly and firmly. He abolished Sunday morning meetings where questions used to be discussed and debated upon. In future all matters of policy are decided by a committee of pigs presided over by Napoleon himself and communicated to the animals through his P.R.O., Squealer. Then comes the volteface. The scene of the windmill is brought up anew and Squealer uses his eloquence to convince the animals that the plan was really Napoleon’s but stolen by crafty Snowball.

Realizing that the farm is far from being self-sufficient, Napoleon introduces his New Economic policy of trading with the humans. He appoints Whymper to negotiate the weekly commerce with the outside world. But he keeps all the strings in his own hands and Whymper has no contact with animals. The violation of commandments follows one after another. He moves into the farmhouse, sleeps in bed, and uses Jones’ Crown Derby at dinner. Without compassion he imposes harsh conditions of living on animals while he and his pigs live in luxury

When the windmill collapses in the gale, Napoleon does not attribute the mishap to faulty construction but put it down as an act of sabotage committed by Snowball.

Napoleon tries to deceive the outside world about scarcity conditions in the farm by window dressing empty drums and taking Whymper on a conducted tour of them. The hens protest when their eggs are arranged to be sold away, but he forces them to surrender by stopping their ration. He then starts a reign of terror. He compels pigs, hens, geese and sheep to confess their complicity with Snowball in many misdeeds. Thereupon he signals to his dogs who furiously fall upon them and tear them to pieces. The air becomes heavy with the smell of blood. Henceforth no animal dares question the ways and deeds of Napoleon.

Before long, Napoleon assumes to himself the highest honour “animal Hero, First Class” and is eulogized by the pig-poet, Minimus, as the “Father of All Animals” and the “Terror of Mankind”. He rarely puts an appearance, now on Sundays, and whenever he chooses to come out his emergence heralded like that of a king and his fierce looking dogs follow him attendance as his bodyguards,

In the sale of the heap of timber he thinks himself to be a very clever businessman. He sets the two farmers Frederick and Pilkington to compete in their offer. Finally, the deal is struck with Frederick who pays the agreed price in currency notes which turn out to be all forged. He tried to re-establish good relations with Pilkington but meets with little success. He fears an attack by Frederick and his men. The attack actually occurs, and Napoleon is not able to take defensive steps as Snowball used to do. He passively witnesses the windmill going up in flames. But he suffers no qualms of conscience and celebrates the victory by conferring on himself the honour ‘Order of the Green Banner’.

The animals undertake to build the Windmill again. They work hard and eat less. At the same time Napoleon and his pigs learn the taste of whisky. Napoleon almost dies of overdrinking. In a moment of regret he makes drinking alcohol punishable with death; but when he recovers, he sets up a brewery in the farm and gets the Commandment written “No animal shall drink alcohol to excess.” Napoleon’s daily ration is half a gallon of beer. His stone-heartedness is shown by the fact that when Boxer, the old horse, collapses in carrying heavy loads, he hands him over to the butcher and spends the money received in price on purchasing whisky.

With the passage of time he ceases to own allegiance to Animalism. He starts walking on two legs, wears Jones’ clothes with a pipe between his lips and favourite sow by his side. The use of telephone, radio and reading of newspapers and magazines are adopted by him without a blush. Then comes the conducted tour round the farm of Pilkington and his friends rounded off by a banquet. In his tour Napoleon declares that the Animal Farm was owned by pigs and that he believes with his community in the principle of co-existence with the human beings. He has abolished the word ‘Comrade‘ of democratic usage and removed from the green flag of the farm the print of white hoof and horn. Finally, he changes the name ‘Animal Farm‘ into its previous name ‘Manor Farm‘. The animals who peep on the scene through the window do not see any difference between him and Pilkington. And when he plays an ace of Spades simultaneously with Pilkington the resemblance between the two villains is complete.

In Animal Farm Napoleon represents the type of a leader who takes advantage of revolution for appropriating all power to himself. The masses after revolution are worse off than before. He is a true replica of Stalin ruled Russia with an iron hand behind an iron curtain. Snowball is virtually the versatile Trotsky who had to flee the country. Napoleon’s alliance Frederick corresponds to Stalin’s friendship with Hitler. The Battle of Windmill recalls the Battle for Stalingrad.

Napoleon’s dogs fill the role of the secret Russian police C.G.P.U. which terrorize the Russian citizens into accepting meekly whatever issues forth from the Kremlin. The purges of Stalin’s political rivals are shown in the ghastly massacre of self-confessing pigs and hens on a Sunday. Napoleon is the type of a dictator who manipulates the force of democracy to rule arbitrarily.

“Man is the only creature that consumes without producing. He does not give milk, he does not lay eggs, he is too weak to pull the plough, he cannot run fast enough to catch rabbits. Yet he is lord of all the animals. He sets them to work, he gives back to them the bare minimum that will prevent them from starving, and the rest he keeps for himself.”

“No one believes more firmly than Comrade Napoleon that all animals are equal. He would be only too happy to let you make your decisions for yourselves. But sometimes you might make the wrong decisions, comrades, and then where should we be?”

“Man serves the interests of no creature except himself.”

“Let’s face it: our lives are miserable, laborious, and short.”

“Can you not understand that liberty is worth more than just ribbons?”

“All men are enemies. All animals are comrades”

“The distinguishing mark of man is the hand, the instrument with which he does all his mischief.”

“Man is the only real enemy we have. Remove Man from the scene, and the root cause of hunger and overwork is abolished forever.”

“His answer to every problem, every setback was “I will work harder!”

“If liberty means anything at all it means the right to tell people what they do not want to hear.”

“There, comrades, is the answer to all our problems. It is summed up in a single word– Man”