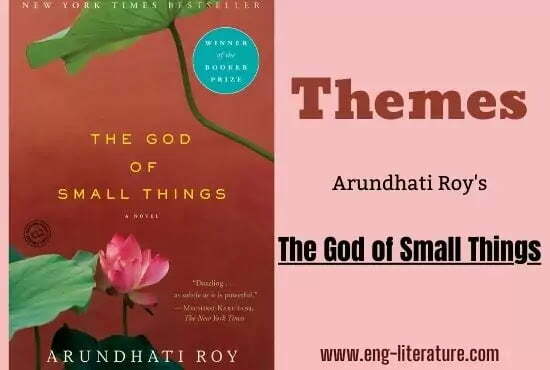 The God of Small Things Themes

Arundhati Roy’s novel The God of Small Things is a blending of several themes. The narration starts with the return of a brother and a sister twins (Estha and Rahel) who had parted at their seventh year and now they have come back to Ayemenem, after twenty four years. Ayemenem is a remote village of Kerala, the once happy home of their childhood. The sense of haunting pain and a never lifting weight of sadness govern the narrative. From the very beginning it is sad, absorbed, repetitive like the tape recorder reversing and forwarding again.

The God of Small Things presents a confrontation between ‘The Big Man, The Laltain’ and Small Man, the Mombathi. In short, the novel shows maladjustment between The God of Big Things (Pappachi, Baby Kochamma, Mammachi, Chacko, Comrade Pillai and Inspector Thomas Mathew) and the God of Small Things (Ammu, Velutha, Estha, Sopie Mol.) According to Roy, the term ‘Laltain‘ means ‘The big guns of society’, and Mombathi refers to the lower strata of society, which has no support and no protection. They are the downtrodden, have-nots, the dalits, the deserted, the marginalized and the defenseless. To put it more frankly, the two Mombatties, Ammu and Velutha have to forsake the big things and indulge in small things.

Roy flings a harsh irony on man’s domination over woman. She means to state that a woman is not a mere toy or an object of pleasure or a means of satisfying the baser passion of men. In fact she is the noblest and richest part of a man’s life. Chacko, the brother of Ammu is a hypocritical male character of the novel. As he is male person of the Ayemenem house, he was sent to Britain to study, though he is an ordinary student. However, Ammu is not allowed to study further. The reason is that she is woman and so she has no right to go to college, because the college studies corrupt a woman. In the opinion of some, women are supposed to be meant for only mating and procreating, serving and nourishing.

Chacko fails in almost every respect including his marriage with Margaret, an English girl who deserted him. He cynically tells his sister Ammu “What is yours is mine and what is mine is also mine”. It is a great irony that a daughter estranged from the husband is tortured and tyrannized in the house of the parents. But, on the other hand, an estranged son, Chacko not only receives warm welcomes but also remains the rightful inheritor of the family’s wealth and fortune. However, the same behaviour of Ammu is termed as illicit, sinful and untraditional. She is locked up in a room and is beaten black and blue. Thus the novelist lashes out at the hypocritical moral code of society, which makes a great difference between men and women. In fact love for man is a passing phase, but it is the essence of her being for a woman.

The author also points out untouchability, a great evil of the society. Velutha has to struggle hard to achieve identity in society. Roy wants to show that even a dalit or an untouchable can also become an engineer, a doctor or a professor if he is properly guided.

Theme on Satire on the Police Administration

The novel also flings a very harsh satire on the police administration. Roy feels that the word ‘POLICE’ stands for politeness, obedience, loyalty, courtesy, intelligence and efficiency. But Thomas Mathew, the police inspector, has not even a single quality. He does not behave well with Ammu. He is an officer guided by politics and big-ups of the society at large.

Theme on Satire on Politics

Another prominent theme of this novel is that it is a satire on politics. The novelist satirizes Marxism and the contemporary politics in Kerala through the character of Comrade Pillai, who is an opportunist and who does not help Velutha in the police custody.

Above all, the theme which rings the note of The God of Small Things is the truthful portrayal of the plight of the women in society and their Herculean struggle for seeking the sense of identity in a male dominated conservative framework. The social structure of an Indian woman is full of many ups and downs, ifs and buts. Life offers little choice for a forsaken woman like Ammu, the central character