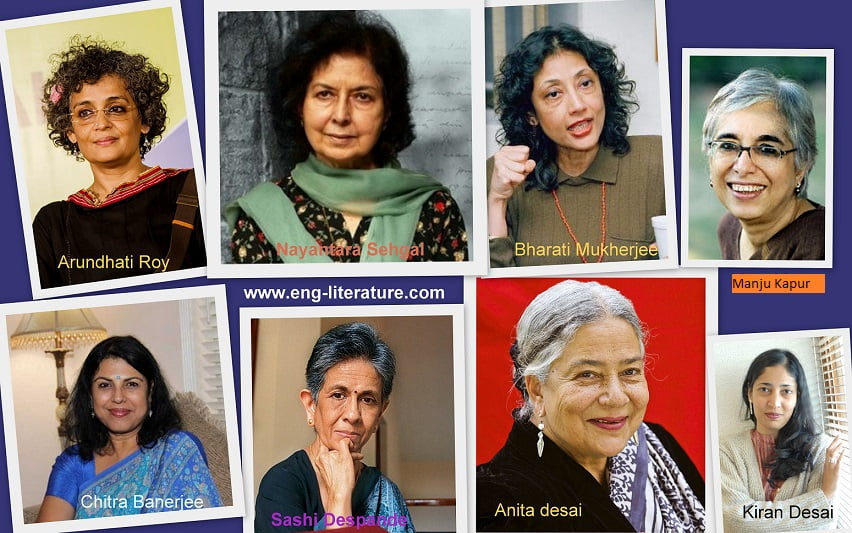 Women are inherently artistic. Women and literature are closely related to each other because it requires a lot of artistic creativity to be good at literature and women are too good when it comes to artistic creativity. The Indian women have significantly contributed to the overall world literature as equal with men writers. It is significant that the spirit of the age is more pervasively and effectively reflected in the Indian woman’s fiction than in other forms like poetry and drama. The novel, by its very nature, is better equipped to deal with social reality, whatever, liberties it may take in projecting it.

From time immemorial India has predominantly been a patriarchal society. Man occupied a prominent place in every sphere of life leaving woman as a fragile creature to depend upon him for everything beginning from her existence to her sustenance. In such a circumstance, a woman’s struggle in a male dominated society can be but easily fathomed. She was considered good for nothing when it came to do something intellectual or artistic. Going to school or reading and writing were not something she was capable of. Her only work was to bring forth children, rear them up and look after household works. Operating with such background, it was inconceivable that women were able to think, study or able to make decisions, could express themselves in the form of speech, poetry, story telling, art etc. A. Sinha opines, “Women in India are, by and large victim of social, economic and political exploitation”

Thanks to the British rule in India, it became a blessing in disguise for it gave glimpses of possibilities that women could be allowed to obtain formal or innovative education. In the midst of such inner struggle, India found a prophet in Raja Ram Mohan Roy who being inspired by the English education and their world planned to bring about a change in the condition of women in India. In those days, women used to write about a woman’s perception and experiences within the enclosed domestic arena. In the 19th century, more and more women actively participated in India’s reformist movement against the British rule. In the 20th century, women’s writing was considered as a powerful medium of modernism and feminist statements. The last two decades have witnessed phenomenal success in feminist writings of Indian English literature.

In the 20th and 21st Century women writers in India are moving forward with their strong and sure strides, matching the pace of the world. We see them bursting out in full bloom spreading their own individual fragrances. They are recognized for their originality, versatility and the indigenous flavor of the soil that they bring to their work. Yes, they are our women writers. The voice of new Indian women writers through their writings, published in between 1980s and 1990s, has ushered in a literary renaissance is the third generation of women Indian English writers like Nayantara Sehgal, Anitha Desai, Arundhati Roy, Shashi Desh Pande, Gita Mehta, Bharathi Mukherjee, and Jhumpha Lahiri.

Away from this line of writing the lives of women, the most successful of the Indian women writers is Jhumpa Lahiri who created the difference among all the women writers. She is a dazzling storyteller with a distinctive voice. She has achieved international applause for her writing which mainly deals with Non-resident Indian characters, refugee issues and problems people face in overseas lands. Mira Nair directed a film based on her first novel ‘The Namesake‘ in 2006. Her book ‘The Lowland’ was a nominee for the 2013 Man Booker Prize and the National Book Award for Fiction.

Anita Desai is unquestionably one of the celebrated Indian – English fiction writers.  She has been shortlisted for the Booker Prize three times, was awarded the Sahitya Akademi Award, in 1978 for her novel, “Fire on the Mountain” , by the Sahitya Akademi, India’s National Academy of Letters. Her notable contributions are The Peacock, Voices of the City, Fire on the Mountain, Clear light of Day, In Custody, Fasting, Feasting and The Village by the Sea.

The novelist with the most sustained achievement is Shashi Desh Pande who is labeled as feminist novelist succeeded in depicting the plight of a successful educated woman and problems of being a woman. Shashi Desh Pande’s novel That Long Silence (1988) is viewed as her emergence as a major novelist. This novel won her the Sahitya Academe award for 1990, tells the story of an Indian housewife Jaya, an upper-middle class house wife. The lack of depth in a woman’s life is clearly depicted in this novel. Her other novels include A Matter of Time, Small Remedies, ‘The Dark Holds No Terror’, ‘Roots and Shadows’ etc.

Manju Kapoor is also one of the significant writers whose work establishes the nexus between the tradition and modernity. The dominating works of Kapoor can be critically seen in her significant novel Difficult Daughters (1998) which offer her Common Wealth Award. Her novel ‘A Married Woman’ is a seductive story of a love at a time of political and religious upheaval, and is told with sympathy and intelligence.

In the similar fashion, Bharati Mukherjee’s fame has shot up in the recent years as an Indian American writer. Her novels Wife, Jasmine, The Holder of the World, Leave It To Me and Desirable Daughters make a bold attempt to rewrite the origins of America’s history in the light of wider American experience. For instance her second novel Wife (1975), she writes about a woman named Dimple, who suppressed by men attempts to be the ideal Bengali wife, but out of fear and personal instability murders her husband. Her best fiction Jasmine (1989) develops the idea of the synthesis of the East and West with a story telling of young Hindu women, who leaves India for U.S. after her husband’s murder as an illegal immigrant.  However, Bharati Mukherjee recaptures history in the most aesthetic sense.

Gita Mehta is also another woman writer who proclaimed about the problems of the contemporary immigrant women with sublime standards. She wrote Snakes and Ladders and Glimpses of Modern India.

Arundhati Roy is the luminary among the contemporary women writers. She is one of the women writers who wrote about the plights of the downtrodden and the suppression of women in a male dominated world and the influence of Marxism on the lives of the downtrodden.  Her novel ‘The God of Small Things’ won the 1997 Booker Prize for fiction and it was one of the bestselling books at that time.

The second Indian to win a Booker Prize in 2006, for her book “The Inheritance of Loss”, Kiran Desai also won enthusiastic reviews for her debut novel, “Hullabaloo in the Guava Richard.” She is the daughter of Anita Desai and her work is motivated by globalization, and the consequence of the country’s development on all social classes.

Indira Goswami was honoured with the Jnanapith Award, which is the highest literary honour. Her work focuses on women and different aspects of Assamese society. Her most famous works are ‘Pages Stained with Blood’ and ‘The Moth Eaten Howdah of Tusker’.

A novelist, poet, professor, and short story author, Chitra Banerjee is indeed a gifted writer. Her significant works include Palace of Illusion, and Mistress Of Spice. She was awarded the American Book Award for ‘Arranged Marriage’. Chitra Banerjee Divakaruni is an award-winning author and poet and her work has been published in more than 50 magazines, including the Atlantic Monthly and The New Yorker.

Anita Nair is an Indian-English writer whose novels are keenly woven on the thread of human nature and values; with a female oriented element. Her ‘Mistress’ was included in the list for the ‘Orange Broadband Prize’ for Fiction.

Nayantara Sahgal was born in 1927 and is an Indian writer in English. Her fiction deals with India’s elite responding to the crises engendered by political change. She was the first female Indo-Asian writer to receive wide recognition. Her main works are: 1) Prison and Chocolate Cake (memoir), 1954 2) This Time of Morning, 1965 3) Storm in Chandigarh, 1969 4) The Day in Shadow, 1971 5) Rich Like Us, 1988 6) Lesser Breeds, 2003.

The patriarchal society prevalent in India had jeopardized and crippled the Indian mind to such an extent that men thought that no woman was found worthy of education. Men considered themselves independent, superior and even almighty. A man was invariably the breadwinner whereas the woman was supposed only to share what the man had earned with his sweat and blood. It looked as though, a man’s world would continue even without a woman. Traits are visible, that in ancient India, women though having an enormous potential, were being unutilized and underutilized. Today, women dare to walk shoulder to shoulder with men. They are ready to expose the splendour and beauty of the world in which they live have a better role to play than remaining mere spectators within the four walls of the house. Women are not inferior to man in rank or performance in anyway. This is true in the field of literature too.