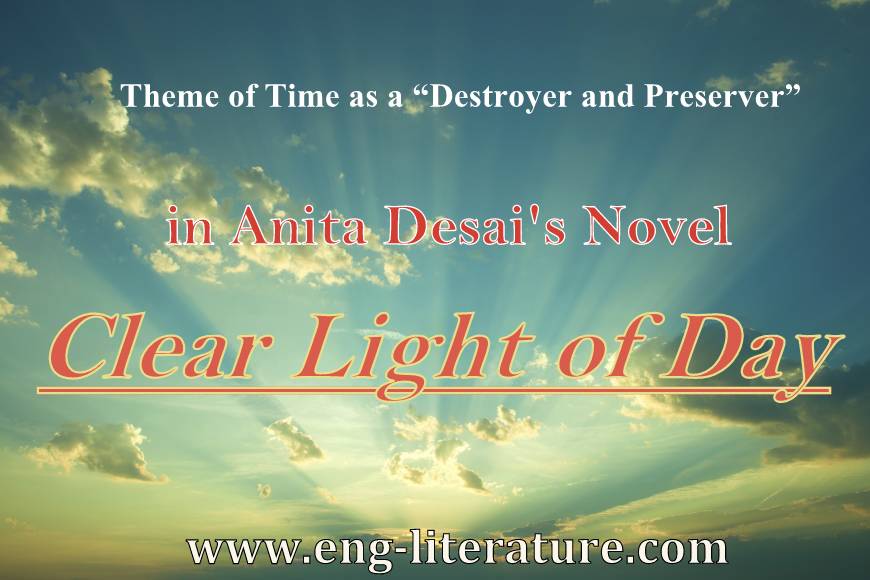 Time is always presented as a great annihilator, a tremendous ravager. Its destructive power has vividly been depicted by Shelley in his sonnet “Ozymandias”. History too bears out this view. The ancient Roman Empire flourished, and then began to decline, eventually coming to an end. The same was the case with Mughal Empire, and later, of the British Empire. Similarly Fascism, Nazism, Communism too arose, flourished and fell. Anita Desai’s award winning novel, Clear Light of Day shows the destruction which time works, mainly in the sphere of domestic life and relationships, and only to a great extent in the life of a nation.

Clear Light of Day deals mainly with the fortunes and misfortunes with the Das family. The passing of years works havoc with the members of this family. This happens in the life of Mira Masi who joins this family as a governess for the mentally retarded Baba. She was married at the age of twelve, and became a widow at fifteen at the pre-mature death of her husband in a foreign country where he had gone to pursue his studies. Aunt Mira became heavy alcoholic. Mr. and Mrs. Das died leaving their wards – Bim, Tara, Raja and Baba in the hands of Mira Masi. One day Aunt Mira had to meet her fatal consequences in the progress of time. An even greater effect of the destructive force of time was the decline in the intimacy between Bim and Raja. When Raja declared that he would soon be leaving for Hydrabad, Bim felt deeply hurt. Years later, time dealt a heavy blow to the relationship between Bim and Raja because of the humiliating letter that raja wrote to Bim about their old house in which Bim and Baba were living as tenants.

The passing of time can interrupt the life of entire nation.  India had been struggling to a achieve freedom from British rule for many years. But time came when British agreed to free India. But the country had to be partitioned in order to meet the Muslim demand for setting up an Islamic country, Pakistan. It was followed by communal riot and slaughter. The Muslims fled from Delhi in order to escape the wrath of the Hindus. Many Muslims including Hyder Ali and his family fled to Hydrabad. The piling up of anger and resentment in the heart of both the communities over the years led to a catastrophe which left a permanent mark upon the people of both the countries; and as a result, the two countries have become hostile to each other.

Paradoxically, time sometimes acts as a destroyer, sometimes as a preserver or gainer.  In the novel Clear light of Day we find certain things continue to exist despite the ravages of time. Certain experiences of human beings continue to be remembered by them, and even by others. Even after many years, Tara has not been able to forget that she didn’t stay by Bim’s side when Bim was being bitten by a swarm of bees. Tara has also not been able to forget that she had not paid enough attention to the ailing Aunt Mira, and that she could not attend Mira Masi’s funeral. Tara has continued to harbor a sense of guilt over the years. Bim remained alone in the house to look after helpless Baba. Then, in an introspective mood, induced and stimulated by the presence of Tara, Bim began to think the damage the humiliating of raja had done to her relationship. The dying word of Aurangzeb led Bim to forgive Raja. Thus Bim’s love for her sister, Tara and her two brothers, Raja and Baba, gains a new impetus.  Time as a preserver plays its role in the last episode of the novel too.

Time is something inescapable. Nobody can stop and slow down the pace of time. All human beings are slaves of time because they all think in terms of days, months and years; and they all think in terms of childhood, adolescence, adulthood, middle age and old age. This slavery to time has its own destructive effects upon people’s feelings and emotions. The two most conspicuous examples of the damage done by this bondage to time are aunt Mira and Bim.

Clear Light of Day has another message for us too; and that is the message of forgiveness. Brothers and sisters should not harbor resentment and grievances against one another on a permanent basis. After all, they were all brought up under the same roof and had shared many activities and many games. They had loved one another. That love should remain and should continue always.