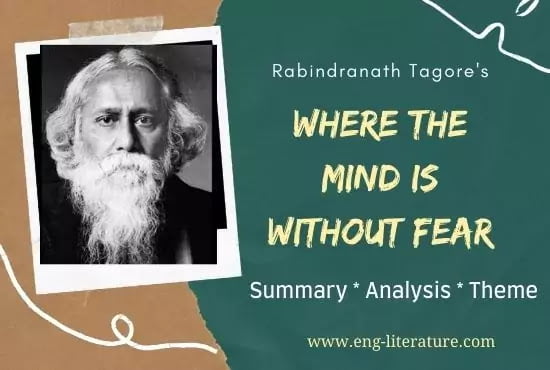 Where the Mind is Without Fear by Rabindranath Tagore

Where the Mind is Without Fear is poem No. 72 of Rabindranath’s poetical work Naivedya which was published in the Bengali year 1308. This volume of one hundred poems, appropriately entitled ‘Naivedya‘, was dedicated by the author to his venerable 83 year old father Maharshi Debendranath Tagore. When Rabindranath read out these poems in manuscript to his father he was so pleased that he gave his son a purse to meet the expenses of the publication of this volume.

The poem was translated into English by the post himself. It was included (the English version No. 35), with fifteen other poems of ‘Naivedya,’ in the English version of Gitanjali, first issued in a limited edition of 750 copies only by the India Society of London on November 1, 1912. The next year in March, Macmillan & Co. first published a popular edition of the English Gitanjali. This was done before the award of the Nobel Prize.

Where the Mind is Without Fear Title

The title of the original Bengali poem is “Prarthana” (A Prayer). It is lyric No. 72 of Naivedya, which means Offering. The poem has no title in the English version. It is verse No. 35 in the English Gitanjali. The first line of the poem has been used as its title. It is a very simple way of selecting a title. This first line however strikes the keynote of the poem. The poem was written in 1901, when India was under British rule. In the poem the poet prays to God to give his country true freedom. This freedom means not only the absence of every bondage social, political and economic, but it also means the freedom of the mind, courage in the pursuit of knowledge and truth, and the fearless exercise of reason. The poet fervently invokes the Father of all mankind to lift his country into that heaven of true freedom and perfection.

Where the Mind is Without Fear Theme

The poem is about true freedom. According to the poet, true freedom is an inner possession of man and it can be realized only with God’s help. It means moral and spiritual uplift of the people under divine guidance. Freedom should give India courage and should induce her people to pursue the path of knowledge and truth. It should liberate her from narrow prejudices and superstitions and make her people sincere in word and action.

We, men and women of India, must make a supreme mental and spiritual effort to achieve this true freedom with God’s help and guidance. This true freedom is true patriotisms and it is something more than narrow nationalism or “self-love of Nations”.

Where the Mind is Without Fear Summary

The poet is dissatisfied with the present state of his country. He invokes God to awaken his motherland with a rude shock and make this country an ideal place. With God’s help, the men and women of India will get true freedom. For this, Indians must be fearless in mind and dignified in conduct. There must not be any barrier to the search for knowledge and truth Indians must be free from all Darrow habits and dead customs. There must not be narrow divisions in the way of the realization of human unity. Indians must be frank and truthful and must strive tirelessly to achieve perfection in an ever-expanding Field of thought and action. They must be sincere in word and deed based on clear reason. The poet prays that with God’s our motherland will achieve this true freedom of mind and spirit, and not merely the freedom from foreign rule.

Where the Mind is Without Fear Analysis

Rabindranath was a true patriot: he was never a narrow nationalist. “My country, right or wrong”, was never his creed. To him love of God and love of the people are complementary and these two justify and fulfill each other. Religion and patriotism reinforce each other.

In the poems of Naivedya, hymns to the Divine are also prayers for the people. The ideal that the poet held aloft for his country and for which he invoked divine aid was also his ideal for every other country of the world. Rabindranath rose above that narrow patriotism which is aggressive and unmindful of other’s good. He protests against the so-called patriotism which means self-love of Nations and which makes a man forget the higher values and principles of human life.

The poem “Where the Mind is Without Fear” is the English version of a famous Bengali poem composed by Rabindranath Tagore, and first published in his Bengali poetical work, Naivedya (1901). Later on it was included in the Gitanjali (an offering of songs), published in English in 1912-13, and occurs at No. 35.

It is one of Tagore’s most popular and admired lyrics and shows his firm faith in God and His benevolence. It is suffused with patriotic feelings and shows the poet’s vision of a free and ideal India. It is a remarkably inspiring poem in which the poet envisions an ideal future for his motherland. He dreams of a free India in which people will lead a good and virtuous life.

It satisfies and appeals to the intellect and inculcates a desire for the growth of moral and spiritual values for which India had been a beacon light to the rest of the world. The poet seems to have felt deeply and intensely all that has suggestive of Tagore’s love for India and her culture. He visualizes a country where the people’s minds will be free from fear and narrow-mindedness such as casteism, racialism, conservatism, etc. In free India everybody will have equal right to attain knowledge. People will remain fully united and live like one community. All old and lifeless beliefs, blind customs and superstitions will be abolished and clear reason will reign. There will be an atmosphere of intellectual and spiritual enlightenment, and people will always follow the right path. They will be inspired by God, and arise and awaken in this ‘heaven of freedom.’

By heaven of freedom’ the poet means not only political and economic freedom, but also spiritual freedom from fear, superstitions, narrow-mindedness and evil desires and motives. This kind of spiritual freedom the poet envisages for his country.

The poem is rather unusual as a poem on freedom. In this poem, the poet preaches the gospel of a new patriotism which is without fear, without narrow prejudices, and which is based on truth and reason and is realized under God’s spiritual guidance.

The song is a fine example of Tagore’s spiritual humanism. It speaks of his love for freedom, and is intensely patriotic in nature. The whole poem is in the form of a single sentence. The key to this sentence is provided in the last line where the poet prays to God to grant true freedom to his country. The rest of the poem is concerned with explaining what this freedom really means. The poet calls it the ‘heaven of freedom.’

Where the Mind is Without Fear Line by Line Explanation

11. where the mind is without fear- The poet wishes that his countrymen (i. e. the Indians) should be free from all sorts of fear. They should be able to live and think independently and fearlessly.

and the head is held high– People hold their heads high with self-respect and dignity.

12. where knowledge is free– Where all have equal opportunities to gain knowledge without any distinction.

23. where the world…narrow domestic walls– Where the people are not divided into small groups on the basis of their caste, creed, language, region, etc.

broken up– divided into

14. where words come out from the depth of truth – Where people speak from their conscience; where people are honest and truthful.

15. where tireless striving stretches its arms toward perfection-Where people never fell tired of making fresh efforts to improve themselves and achieve perfection in all fields of life.

16. where the clear stream of reason of dead habit– Where all antiquated customs, lifeless, habits, blind beliefs and superstitions will be abolished, and clear reason will reign.

the clear stream of reason– reason is spoken of as a stream of clear water.

lost its way– digressed from the right path.

desert sand– Dry barren land where nothing can be produced.

17. where the mind is led forward.. action– Where people will be inspired by God to pursue their ever-expanding thoughts and

18. Into that heaven of freedom…awake– The poet fervently prays to God to lead his country to such a ‘heaven of freedom’ where spiritual outlook, universal brotherhood, free education, unity, peace, truth, reason, love, lofty thoughts and noble actions will reign supreme.

my Father– the Almighty God, Creator of the universe.

1 thought on “Where the Mind is Without Fear Summary, Analysis, Theme, Explanation”