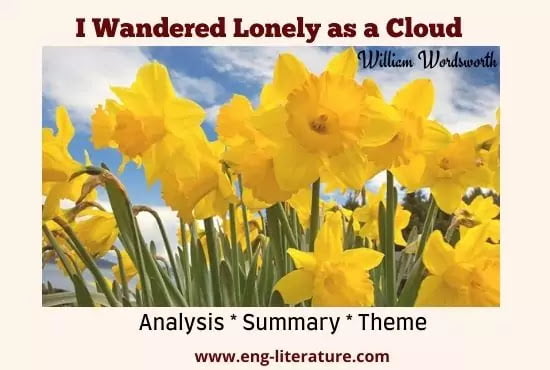 Analysis of I Wandered Lonely as a Cloud

I Wandered Lonely as a Cloud Analysis

“I Wandered Lonely as a Cloud” or “The Daffodils” was composed by Wordsworth at Town-end, Grasmere, in 1804, and published in 1807 in the series Moods of My Own Mind. It is one of the finest and most popular poems of Wordsworth. The occasion of the poem was the poet’s visit with his sister Dorothy to Gowbarrow Park, Ullswater in Lake District in a stormy day, where he saw a broad belt of full-grown daffodils growing on the wooded shore of an island lake. The sight of the flowers was very charming and appealing to the poet. A description of the scene has been given by the poet and also by his sister Dorothy in her Journals, dated April 15, 1802.

The Daffodils is a great Nature poem. It may be regarded as a representative poem of Wordsworth as a poet of Nature. Wordsworth strongly believes that Nature is full of joy and has a life of her own. The sight of a very large number of golden daffodils looks very charming to the poet. It appears to him that the flowers are very happy and enjoying the pleasant atmosphere. The daffodils are-

“Fluttering and dancing in the breeze.”

A poet, having a sensitive and responsive heart, cannot help sharing the joy of Nature-

“A poet could not but be gay,

In such a jocund company.”

The poet is so much thrilled and excited that he looks fixedly at the flowers to enjoy their beauty to the full. The great beauty of the poem is its wonderful buoyancy. The poet expresses his delight with great passion. He makes use of beautiful and appropriate similes to make the whole picture very appealing and colourful.

The daffodils, shining and stretching to the farthest area where the eye can survey, are compared to the innumerable stars that shine and twinkle on the Milky Way. Nature is full of joy, and so is the heart of the poet. The whole picture is described very vividly and with great passion.

The concluding stanza of the poem is a fine illustration of Wordsworth’s theory that “poetry is emotions recollected in tranquility.” The poem was not written at that very moment when the poet actually saw the daffodils, but at a later date when he recalled the whole picture in his mind. Wordsworth believes that recollected emotions can be as vivid, joyful, and thrilling as the actual observation of a beautiful scene of Nature at any one particular time. The experience is not lost, but may be revived whenever it is wanted.

The beauty of the daffodils is a permanent source of pleasure to the poet. Whenever he is lonely, unoccupied or thoughtful, the recollection of the daffodils in his mind makes him happy once again, and his heart begins to dance with the dancing daffodils.

I Wandered Lonely as a Cloud Rhyme Scheme

The poem was written in iambic tetra meter with dactylic variation in the last line of each stanza.  The poem is having four stanzas with six lines (sestet) each. The rhyme scheme is ABABCC, ending with rhyming couplet.

I Wandered Lonely as a Cloud Literary Devices

“I wandered lonely as a cloud”,

“Ten thousand saw I at a glance”,

”They stretched in never-ending line”

“Beside the lake, beneath the trees”, (repetition of ‘b’ sound)

“They flash upon that inward eye.” (Where inward eye suggests the mental vision or memory of daffodils)

The poem is replete with visual imagery such as “lonely as a cloud”, “golden daffodils”, “ a crowd”, “never-ending line”, ”milky way” and “jocund company.”

I Wandered Lonely as a Cloud Summary

The poet describes a speaker walking alone along the shore of a lake lined with trees.

During this walk the speaker discovers a large number of yellow daffodils moving in a breeze.

Because there are so many of them they remind the speaker of the Milky Way, a galaxy containing a huge number of stars.

The speaker notices that the flowers move more than the rippling waves of the lake.

Fascinated by this sight he cannot turn his eyes away but doesn’t yet appreciate the impact this experience will have on him later on.

When at home, lying on his couch relaxing more musing, the speaker often recalls the sight of the daffodils. He draws a lot of pleasure from this inner image and sees himself dancing with the daffodils.

I Wandered Lonely as a Cloud Theme

The major theme of the poem is Nature’s beauty is the ultimate source of human happiness. The poem describes the healing and refreshing power of Nature. The impressions of the beauty of Nature was so strong that even after many years their memory was more than enough to lighten his mood even at the darkest passage of his life which is the ‘bliss of solitude’.

I Wandered Lonely as a Cloud Line by Line Analysis

golden– The daffodils are yellow in colour.

lake– the lake referred to is Lake Uliswater.

at a glance– in one view.

they– the daffodil flowers.

little thought– i.e. he had no idea. He was so spell-bound by the beauty of the flowers that he could not think for some time.

the show– the beautiful and captivating sight of the daffodil flowers.

with pleasure fills– the remembrance of the sprightly daffodils fills the heart of the poet with pleasure once again.

dances with the daffodils– the heart of the poet again begins to feel the joy of the daffodil flowers.

I Wandered Lonely as a Cloud Recitation