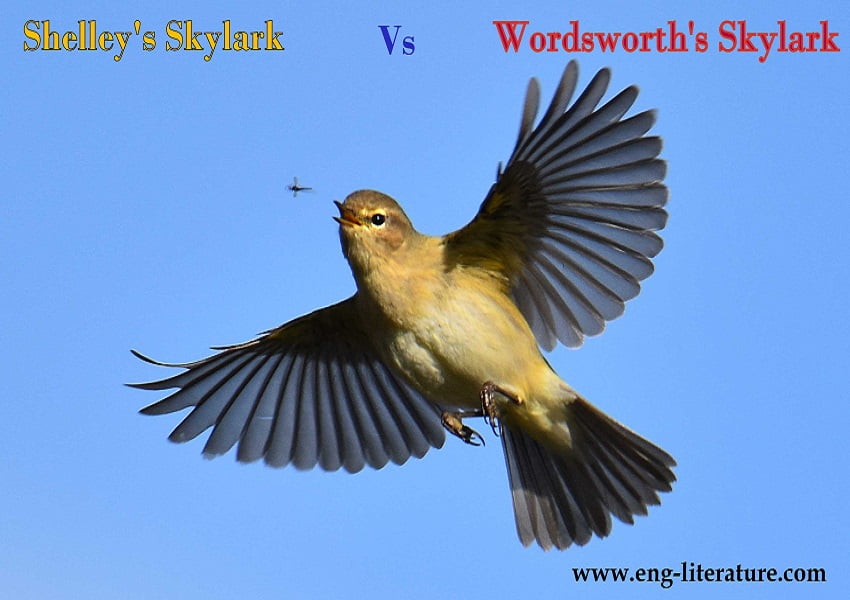 In the firmament of Romantic literature, both Wordsworth and Shelley are two dazzling luminaries. Both their Skylark poems deal with a common theme, namely the skylark, a sweet song-bird of England. Though both the poem treats the same theme, their approach is different. Wordsworth wrote his poem as a rejoinder and partial criticism to the lyric of Shelley written earlier. Again Wordsworth’s poem is addressed to the skylark, the skylark as a species of bird, while Shelley’s ecstatic chant is inspired by one particular skylark’s song.
In concept, tone and temperament, the difference between the two poets is very prominent. But still they have some points of contact. Both regard the bird as ‘ethereal’ – because of it soars high up in the sky – and hidden by the strong light of the sun. Both of them eagerly listen to its ‘flood of harmony’, and sing in glory of its supremacy over all earthly music. Both poets also agree with the fact that the skylark soars and sings simultaneously, and if it stops its flight, the song must come to an end.
Also Read:
In contrast, Wordsworth’s approach to the bird is one of a poet of objective reality. He describes the habit of the bird with perfect fidelity. He does not lose sight of the bird in its upward flight and song. The skylark is to him a creature of flesh and blood, and not a metaphysical abstraction. It is true to the everyday life of the bird. It does not “despise the earth where cares abound.” Even when it soars to the regions beyond the clouds, it does not forget about its earthly connection. Its song is prompted by its love for its mate and young. Wordsworth humanizes the bird.

“Through his skylark he bids us observe that it is not the distance from the earth but the nearness to it which inspires celestial joy.” (Hutton)

Shelley’s skylark is not the creature of flesh and blood. It is a metaphysical abstraction. It is an “unbodied joy” whose race is just begun. It is a symbol of illimitable thirst drinking in illimitable sweetness. It is an image of the rapture which no man can ever reach, because it soars so far from earth, because it is ever rising with unflagging wing despising earthly delight. It is the quintessence of that throbbing, joyous life which slips away so quickly and inevitably from man. Unlike Wordsworth’s Shelley’s skylark does not recognize any earthly abode. While Shelley is almost forgetful of this earthly life and is eager to escape the bondage of the sad worldly existence, Wordsworth is ever

“True to the kindred points of heaven and home.”

As superb pieces of art, the two lyrics are poles asunder. In musical quality Shelley is by far the more wonderful. Like the song it celebrates it is “a rain of melody”, a veritable symphony of song. Its lilting melody, bright assemblage of colours and passionate sweep cannot fail to fascinate any reader. But as poetry Wordsworth is more mature and more acceptable equally to heart and brain. It has truth, wisdom, sanity, and the wealth of deep humanity of tone, which is the ultimate gift of Wordsworth’s genius. Prof. Herford has finely expressed the contrast in the approach of the two poets in the epigrammatic observation:

“Where Wordsworth’s imagination isolates and focuses…. Shelley’s dissolves and transcends.”