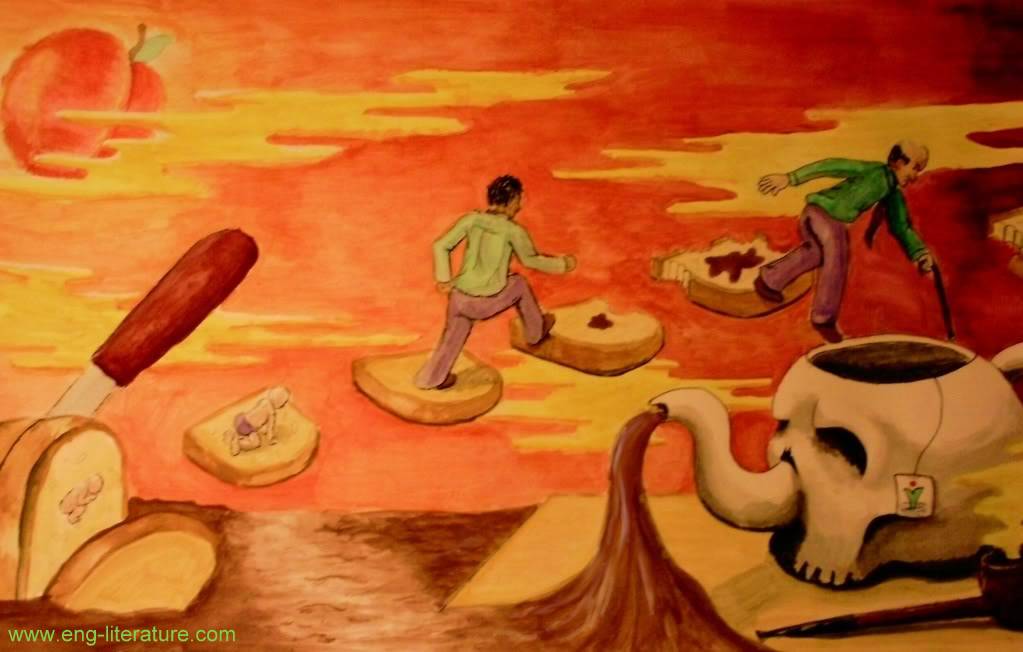 “Eliot with his high charged microscopic insight portrays the graphic picture of a despaired generation, the smell of war ridden soil, a state of psychological insurgency and the monotony and futility of modern civilization and they are the images of imperial catastrophe.”

Symbolism suggests an image with a host of associations. For instance, rose is generally a symbol of beauty, but Eliot makes it represent Virgin Mary. Coriolanus stands for proud and selfish man. Eliot makes it a representation of the lost leader and isolation and spiritual alienation. According to Edmund Wilson, symbolism is the medley of images; the deliberately mixed metaphors, the combination of the grand and the prosaic manners; the bold amalgamation of the material with the spiritual. Images imply pictures or other sense impressions conveyed in words. An image in poetry is a word or expression which appeals directly to the sense organs.

There are two types of symbols-traditional and personal. Traditional symbols are common stock symbols which have been used in ancient times. Poets use personal symbols to actualize their work. For example in “The Love Song of J. Alfred Prufrock”, the evening is compared to a patient lying on an operation table and endless streets are compared to irritating, monotonous arguments.

Published in 1915, “The Love Song of J. Alfred Prufrock” is a symbolic poem which reflects the condition and mood of the modern city dwellers. It expresses the hollowness, infertility, the psychological trauma, the spiritual languor, the frustration and the hamletic state of mind of the post war generation.

The mental condition of Prufrock, a bald headed, middle aged man is symbolized by an etherized patient on an operation table:

“…when the evening is spread

Out against the sky

The lines –“Woman come and go, talking of Michaelangelo” satirises the vague pretensions of the modern ladies in a symbolic way. Then the image of “lonely man in shirt –sleeves, leaning out of the window” gives the essence of sterility and vacuity characterizing the lives of these hollow men.

The spreading fog of the October evening resembles a cat that is lazily going about. The fog also reflects Prufrock’s state of mind – his laziness and hesitancy towards taking decision regarding the proposal. The fog also symbolises the dirty and unhygienic environment of city life.

Prufrock’s death wish o modern man is evident in different parts of the poem. The poet has used various images to expose the idea like “pinned on the wall”, “the floors on the silent seas”, “the eternal footman”, “chambers of the sea”, “we drown”, “I am Lazarus”.

Eliot likes the images of nature, particularly of the sea which represents the mind of Prufrock which is violated by stormy waves and cannot be relaxed.

There are three allusions in the poem-Lazarus, Prince Hamlet and John the Baptist. Besides this, the Epigraph written at the top, from Dante’s Inferno signifies that the world of Prufrock is a kind of hell. The second literary allusion suggests Prufrock is indecisive and tensed like that of Hamlet. The third literary allusion is the story of John the Baptist. John lived for a purpose and died for a cause whereas Prufrock wishes to die because he finds his life to be purposeless.

The symbols and images used by Eliot in “The Love Song of J. Alfred Prufrock” are appealing and very compact, as they can penetratingly portray their concerned atmosphere and situation. They emerge out of Eliot’s deep realization of the anarchy, futility and alienation of man in a fragmented and disintegrated war ridden world.