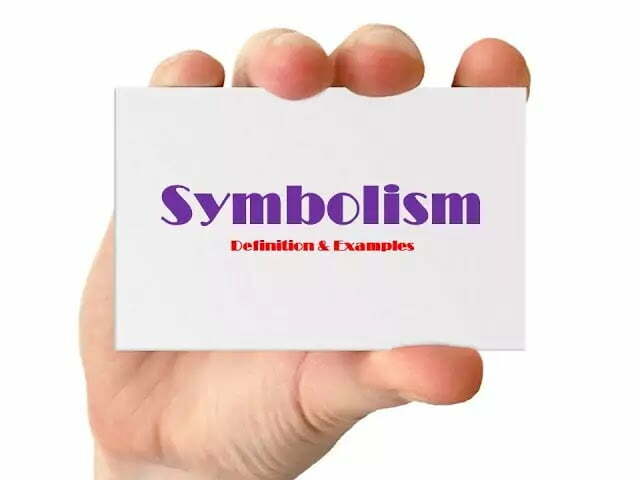 Interestingly, the word symbolism, derived from the Greek word ‘symballein’ (a compound of the word ‘syn’=together and ‘ballein’=to throw), means to throw together. With symbolism, authors create layers of meaning because symbols often have more than one meaning.

Generally, symbolism is an object representing another to give it an entirely different meaning that is much deeper and more significant. Sometimes, however, an action, an event or a word spoken by someone may have a symbolic value. For instance, “smile” is a symbol of friendship. Other literary devices, such as metaphor, allegory, and allusion, aid in the development of symbolism. Authors use symbolism to tie certain things that may initially seem unimportant to more universal themes.

Some Common Usages and; Examples:

In our daily life, we can easily identify objects, which can be taken as examples of symbol such as the following:

2) A red rose or red color stands for love or romance.

3) Black is a symbol that represents evil or death.

4) A ladder may stand as a symbol for a connection between the heaven and the earth.

5) A broken mirror may symbolize separation.

6) ‘Ashoka Chakra’ in our National Flag is a symbol of ‘progress’.

The literal “spot” she is trying to rid herself of is King Duncan’s blood, though the spot is a symbol for the mark on her conscience. Here the blood spot is the symbol of ‘the act of crime’.

We find symbolic value in Shakespeare’s famous monologue in his play As you Like It:

“All the world’s a stage

And all the men and women merely players;

they have their exits and their entrances;

And one man in his time plays many parts,”

The above lines are symbolic of the fact that men and women, in course of their life perform different roles. “A stage” here symbolizes the world and “players” is a symbol for human beings.

One notable example is in Joseph Conrad’s aptly titled Heart of Darkness, where the “darkness” of the African continent in his work is supposed to symbolize its backwardness and the possibility of evil there.

One Ring to bring them all and in the darkness bind them.”

(The Lord of the Rings by J.R.R. Tolkien)

J.R.R. Tolkien’s famous fantasy series, The Lord of the Rings, is a hero’s quest in which the hobbit Frodo Baggins must destroy an all-powerful ring. This object is imbued with magic through its creation, and is a symbol for ultimate power. The ultimate power also becomes equated with evil. The ring simply being in Frodo’s presence begins to turn Frodo toward desire of power, and thus evil. However, Frodo’s ability to combat the power of the ring shows that he possesses a great inner source of goodness

Symbolism gives a writer freedom to add double levels of meanings to his work: a literal one that is self-evident and the symbolic one whose meaning is far more profound than the literal one. The symbolism, therefore, gives universality to the characters and the themes of a piece of literature.