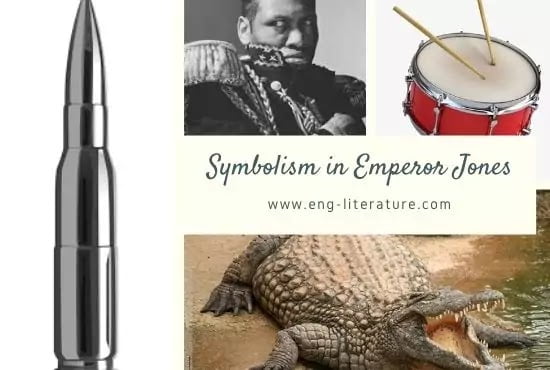 A literary symbol unites an image and an idea. Malarme explained symbolism as ‘the art of evoking an object little by little so as to reveal a mood’. Working as an experimentalist, O’Neill adopted symbolism because with the help of symbols he could say more than ordinary speech. The symbols could serve to interpret a theme, to make it acceptable, as an escape, to awaken dormant or suppressed experience, as adornment or exhibition. But O’Neill used them time and again to express mental states, dream, visions and inner experiences.

The setting, the characters, the flight through the forest, the forest itself, the tom-tom, the silver bullet, the stone altar and tree, the crocodile etc. in the play have symbolic significance.

The setting is symbolic. The forest with its sensuous blackness represents nature, while its primeval terror represents the primitive consciousness. In fact, standing at once for the glory and horror of human freedom, the forest assumes numerous shapes (e.g., prison, auction-room, ship, and altar). The flight through the forest symbolizes psychological regressive fight from one’s own self. As mentioned by Doris Falk, the “stone altar near the tree combines the sexual and the religious symbols as if to signify that physical and spiritual births are one.” Jones’s feeling that he has come to a familiar place indicates symbolically that he has returned to the primitive stage of evolution. And now evil which has been his God appears as a crocodile and demands life. In killing it, therefore, Jones kills himself. The action starts in the afternoon which signifies confidence, continues at night which is the symbol of terror, retrogression and disintegration, and ends at dawn which stands for retribution.

The characters are also used as symbols. Brutus stands for the brute power of man, his animal instincts and impulses. Thus, Brutus Jones is the symbol of every man. He is also a symbol of man’s vain boast of power. He as the Negro is the symbol of displaced superstitious humanity, of innocence and violence, of elemental simplicity and primal humanity. Loss of his hat, coat, spurs, represents the stripping off the layers of civilization.

What does the silver bullet signify in Emperor Jones?

On the surface the play is the story of a negro emperor, his guilty and sinful past, his rise to kingship, his fears and nervousness, and his escape from the aggressive natives, and ultimately his death. But symbolically the flight represents the soul’s attempt to seek salvation and freedom from bondage. The progress of Jones is progress in self-understanding it is the stripping off of the masks of self, layer by layer, just as bit by bit his emperor’s uniform is ripped off from his back, until at the end he must confront his destiny himself-in nakedness.

The Symbolic Significance of the Tom-Tom

The beating of the tom-tom is equally symbolic. According to Edwin Engel, “The beating tom-tom symbolizes the all-pervasive and inescapable presence of the primitive.” The tom-tom beats in the camp of the ‘bush niggers’ to which Jones is helplessly drawn and it beats in Jones’s body, representing the primitive blood which charges through his arteries. Beginning at a rate corresponding to the normal pulse beat and only faintly heard, it becomes perceptively louder and more and more rapid as Jones becomes increasingly terror-stricken, as his visions are regressively aboriginal, as he approaches the camp of the bush niggers, when he is finally killed with a silver bullet, the tom-tom instantly ceases.

O’Neill has made use of colour symbolism in many of his plays, such as, Thirst, Warnings and The Emperor Jones. The emperor’s audience chamber has whitewashed walls, a floor of white tiles, and the portico having white pillars. Since Brutus is a negro, a black man, the white colour has both a moral and a racial meaning. Jones has made a spectacular rise by imitating the shrewd and clever ways of white men but his blackness in the form of his heredity causes his tragedy. It should also be noted that whiteness is also the symbol of death-in-life, Jone’s white imperial existence is nothing but a death-in-life, and to Smithers whiteness is the symbol of the tomb. The scarlet colour has also its significance in the play. To Jones it is a symbol of imperial authority, but, in fact, it stands for materialism, sinfulness, violence and blood. Again and again Smithers makes use of its last meaning by swearing “bloody” and “bleeding”. He calls Jones “the bleeding’ nigger.”

The crocodile stands for the evil of the self. Doris V. Falk says.

“from the symbolism of the dance and the use of the silver bullet, we know that the evil represented by the crocodile is the evil of the self that in killing it Jones has killed himself–at least, that distorted image of the self which was his life motivation. He has performed the justice demanded by the dance.”

In this play, O’Neill has achieved a remarkable synthesis of symbol and dramatic action of the inward and the outward. Brutus Jones emerges as a gigantic universal figure whose terror strikes. But the symbolism aspect has been mixed with realism to make the play concrete and more acceptable.