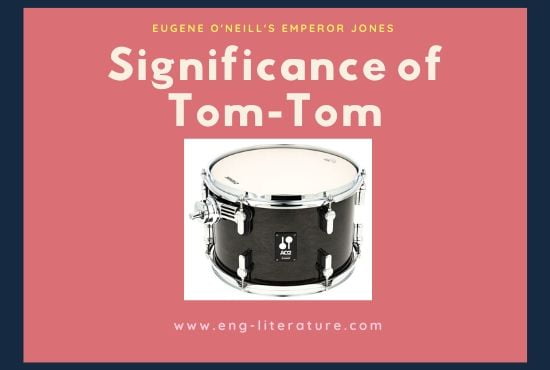 Significance of Tom-Tom in The Emperor Jones

The expressionistic dramatists were fond of using sound and lighting effects to reveal the states of mind of their characters. O’Neill also attached great importance to sound effects and made them structural parts of his plays. In The Emperor Jones also, throughout the six forest scenes we hear a number of sounds, e.g. the sounds of the Great Forest, the clicking sound, the sounds of the Prison-Guard, the Witch-Doctor’s croon and the tom-tom sound.

Throughout the play the sounds from Jones’ revolver, like the tom-tom, have an important unifying function; they end each forest scene except one-the slave ship scene where instead a similar effect is gained by Jones’ voice rising to the highest pitch of sorrow and desolation as the scene ends. His wail is carried over to the next scene, the Congo Scene, thereby binding the two together. Similarly, the Witch-Doctor’s cries of “furious exultation” as the demands Jones’ sacrifice are echoed in the “savage exultant yells” of the natives as they kill Jones in the final scene; here the parallel sounds help to suggest the mysterious identity of Jones with his killers.

However, the sound which is most important, and which is heard persistently throughout the play is the beating of the tom-tom on a distant hill. The tom-tom is a kind of big drum which the natives sounded on various occasions for various reasons. It was sounded to encourage the tribes to attack a hostile tribe or to prepare them for their own defense against the attack of an enemy. The wild primitives danced to the beat of the drum and the pace of dancing increased in keeping with the rhythm of the tom-tom. In this way a wild frenzy was induced and they marched dancing, if an invasion was in the offing.

The tom-tom was also beaten to exorcise (to frighten away) devils and evil spirits. It was also beaten to cast spells to destroy some enemy. As the tom-tom was sounded the witch-doctor danced, swayed and chanted mantras for the purpose, and it was supposed that in this way the fate of the enemy in question would be sealed. The beating of the tom-tom is thus seen to be the instrument of fate for determining the doom of the individual concerned. In The Emperor Jones, the tom-tom is beaten with this very end in view, and its sound, increasing in rapidity and intensity, pursues the fleeing Brutus Jones, like some relentless Fate, till he is almost driven crazy. He has the illusion that his enemies are coming nearer and nearer to him while, as a matter of fact, they were there on the same hill. Thus here the tom-tom serves to increase the terrors of Jones as well as it affords his enemies time to mould silver bullets with which he is ultimately killed.

In the afternoon of the fateful day the sound of the tom-tom is heard at the end of Scene I, coming from the distant hill, and Jones at once understands that his subjects are in revolt against him. He knows his game is up, and so he runs away from the palace according to the n he has already formed. In the beginning, it is a low, vibrating end, but soon it seems to grow in rapidity and intensity. In Scene II the silence is broken, we are told, “by the far off quickened throb the tom-tom.” In Scene III, it seems to the terrified Jones that sound of the drum is coming from some nearby place. They must have carried it along with them. The very thought is maddening to him Jones fires his revolver, “the heat of the far off tom-tom become perceptibly louder and more rapid.”

The tom-tom sound is the symbol of relentless destiny of Jones Its increased volume of sound and rapidity of beat induces terror and nervousness in Jones. At the end of Scene VII, Jones sees in it some baffled but revengeful power. As mentioned by Isaac Golden. “Tom-Tom is part and parcel of the psychological action; at first it is the call to war, then it merges into the Emperor Jones’ vision of the slaves working to its beat; finally it becomes his own throbbing, feverish temples, and all the while it is our heart-beating more and more rapidly as we follow his fate.”

On the realistic level, the beating of the drum is part of the “war dance” which the natives in rebellion perform to get up their courage to pursue Jones, whom they believe to possess strong magical powers. Thus, by beating the tom-tom they work a counter-spell. To Jones this beating is like an illomen. In increases his heart-beat; a strange look of apprehension overtakes him. As the drum beats grow faster and louder, his fear increases in the same proportion. When the heart of Jones finally ceases to beat, the sound of the tom-tom abruptly stops. To indicate further that the drum beat represents essentially an inner fate, O’Neill makes it grow and accelerate after each shot from Jones’ revolver.

The tom-tom drum further symbolizes the pervasive and inescapable presence of the primitive. With its sounds the primitive blood of Jones charges through his arteries. Furthermore, the throb of the tom-tom is the most effective device used in the play to objectify the inner terrors of Jones.

As stated by Chaman Ahuja,

“At first a call to war, it gradually becomes a presentiment of a brooding fate, i.e., a call to death; next, it merges with Emperor Jones’ visions of the slaves working to its beat; and later still, it becomes successively the voice of his internal guilt and the throbbing of his temples. What is more, all the while it is our own heart, beating more and more rapidly as follow it. The tom-tom that projects Jones’ rising panic is part of the psychological action; but since that is the dramatic action as well, we may say that through the tom-tom the symbolic and the drama; actions are synthesized. What is more, by inducing panic in the audience, it helps them to share emotions of the terrified Jones – a wonderful seat in participation mystique.”