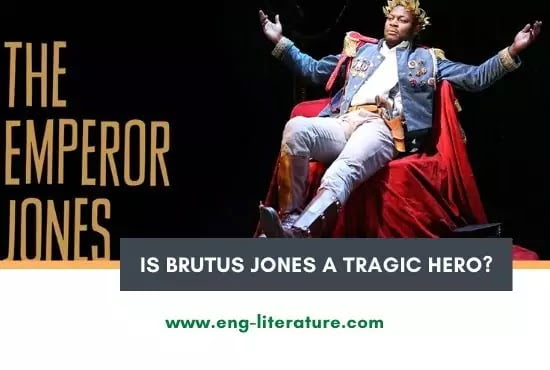 Is Brutus Jones a Tragic Hero?

The hero of The Emperor Jones, Brutus Jones is a remarkable creation. He has attained a stature, and is a person of some magnitude. He has not been involved in any physical conflict. It is through his own egotism and pride, through his exploitation of the natives, that he has provoked a revolution. His own hubris has brought about his downfall. But the main interest lies in following his mental reactions, his cogitations, and imaginary fears.

Who is the protagonist of the play The Emperor Jones?

Brutus Jones resembles the heroes of the Greek tragedies in so far as his own pride and egotism have antagonized him with others, and he wishes to belong to the universal order. Like other tragic heroes, Brutus Jones also has his epiphany or the moment of the self-realization. But O’Neill’s hero is the twentieth century character involved in conflict with himself. Doris Folk has observed in connection with O’Neill’s heroes :

“An O’Neill protagonist is not compelled to make choices between alternate actions in order to accomplish another action ; he must make a choice between the alternate images of the self in order to discover the real-self which he often fails to do.”

Thus, O’Neill’s heroes are engrossed in their conflict with self-images and real images. They must realize their true-self from which they have been removed. In this process, they clash with other characters.

Doris Falk, further comparing characters in Aristotle and O’Neill, points out that in Aristotle the character reveals a moral purpose. But in case of O’Neill’s heroes there is “the ethos or moral : purpose of the character to perpetuate and strengthen an illusion about himself.” Thus every hero including Brutus Jones has created a self-image which he regards as the real image, but it runs against his real image or self. The false image causes hatred of the self and this impels him to run after something illusory, and this is the hero’s hubris. O’Neill’s hero has neurotic pride which entails his suffering and doom. Brutus Jones’ self-image is born of his pride and dishonesty.

Brutus Jones is not an Aristotelian hero. Aristotle laid down the hero of a tragedy must be an exceptional individual, a man of high rank, a king or a prince, so that his fall from his former greatness would arouse the tragic emotions of pity and fear. All Shakespeare heroes fulfill this requirement. But Jones, the central figure in the play is not a hero in the Aristotelian sense. He is a crook with a shady criminal, who freely exploits the natives and by his superior cunning becomes their emperor within two years. No doubt he is superior to the natives in intelligence but he is entirely lacking in that nobility and greatness of soul which the tragic hero should have.

Pride is the fatal flaw in Jones’ character. His pride makes him contemptuous of the natives over whom he rules, of the laws which he himself has made, and of his role as an emperor which he calls “a circus show” and which he stages not for love of it, but for the benefit of the ignorant and superstitious negroes. He is contemptuous even of the white Smithers. He is like the enslaved mankind to whom Prometheus had taught the use of fire. His first instinct is to despise all those who are still in bondage, to turn traitor to his own people, and to enslave them, as he himself had been enslaved, by superior knowledge and trickery of the whites.

Jones’s pride and arrogance make him a tyrant. He exploits the natives and extorts money from them, till the repression becomes intolerable and they rise against him in revolt. Their revolt is the direct outcome of his pride and wrong-doing. He knew that the natives were bound to revolt against him sooner or later, and had carefully planned his escape from the island. On the fateful day, he ran away from the palace with great self-confidence, but to no avail. He is ultimately killed by the natives with a silver bullet, the symbol of his pride and greed. ‘Thus, it is his pride that is responsible for his downfall and death. But he is not fully purged of his pride because it is a silver bullet alone that has killed him. So his death is not cathartic in the Aristotelian sense either. He is not purged of his faults.

O’Neill has not exalted his hero. He has reversed the tragic process ; instead of going up the spiritual ladder, Jones goes down. The regression of Brutus Jones is akin to Lear’s stripping, but Lear gains spiritually what he loses psychologically. Instead of revealing the nobility and grandeur of the human soul, Emperor Jones shows that man is essentially a beast and we find that his progress in civilization has made him a bundle of nerves.