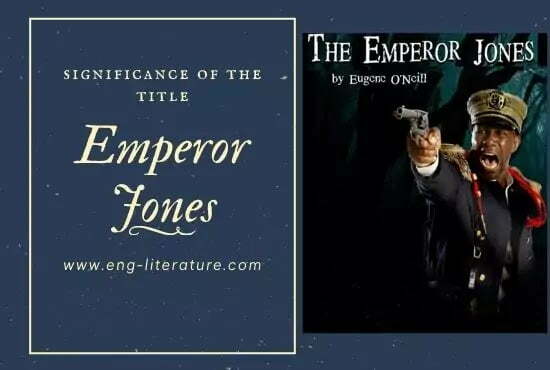 Significance of the Title of Emperor Jones

Eugene O’Neill first intended to entitle the play, The Silver Bullet, but on second thought he dropped the idea and named it ‘The Emperor Jones‘. Thus, he named it after the chief protagonist. It was a happy choice for the play deals entirely with the life, career and tragic death of Jones.

The action of the play revolves round Brutus Jones. The play opens one afternoon of a crucial day in the career of Jones and it ends with his tragic death at the dawn of the next day. Throughout the play attention is focused on Jones. In Scene I, through a dialogue between Jones and Smithers, a white trader, we come to know about the past of Jones. We are told that he is a negro who worked as a Pullman carter in the States for a number of years. There he acquired the veneer of western civilization, but failed to control his animal instincts and impulses which came to the surface at the least provocation. Thus he committed two murders, was jailed for life, but he broke out from the prison and made good his escape to an island in the West island in the West Indies.

It is the Emperor Jones who is the centre of the legend of the Silver Bullet. On reaching the island he is able to impress the simple and ignorant natives that within two years he is able to rise to the position of the Emperor in the island. He amassed huge wealth in a foreign bank. Once Lem, a tribal chief tried to kill him by shooting at him from point blank range, but he was not killed. He used the incident to great advantage to create the myth that he bore a charmed life, and he can be killed only by a silver bullet. In order to make this myth credible by carries a silver bullet in his revolver, and intends to shoot himself with it, if the circumstances make it necessary. The superstitious natives fully believed that he bore a charmed life.

Jones is not interested in playing the role of an emperor. It is not the glamour of kingship which he craves, for he lusts only for money. Moreover, he knows that the natives would soon revolt: against him, and he was carefully planned out his future course of action. He would escape through the great forest which is close by, and for the purpose he was hidden there some food under a white stone and has carefully familiarized himself with the route he intends to take, Crossing the forest he would reach the seacoast where he would be quite safe from his revolting subjects. Then he would freely and comfortably live on the wealth he has already amassed. The Scene I shows that he is intelligent, crafty, proud, self-confident and far-sighted.

On the afternoon of the day on which the play opens, the natives are already in revolt against him. Jones runs away according to his plan. The Scenes II to VII which follow are sustained pieces of monologue, the speaker being the runaway emperor Jones. Throughout, the attention is focused on Jones and the monologue is expressive of what is happening in his soul or psyche. He has illusions or hallucinations which are objectifications of his racial and personal memories. Thus the shapeless figures of nameless fears which he sees at the edge of the forest are symbolic of the fear complex within him.

He also sees the vision of Jeff-a negro whom he had killed is an externalization of his guilt-complex. Similar is the vision of his fellow prisoners and the prison-guard whom he had killed. The vision or the auction in the slave market, the visions of the slave-ship and of the Congo Witch-Doctor, the altar and the crocodile-god, are so many externalizations of his racial memories or what Jung calls the “collective unconscious”.

At the end of each scene, Jones fires his revolver and the hallucination comes to an end. The last bullet, the silver bullet, is fired at the crocodile god. In each scene Jones strips himself of some part of his emperorhood till he becomes a primitive negro dressed in a loin-cloth. His regression to his primitive negro-origin is complete.

In the last score of the play, Jones again is the centre of attention. The beating of tom-tom strikes terror into his soul, he becomes panicky, forgets the route, and takes a circular course. The result is that he returns to the edge of the forest where he had begun his last journey, and where his enemies are waiting to kill him. He is killed by a silver bullet which the natives had moulded for the purpose.

Thus, the play is entirely concerned with Jones’ life, career and death, his past and present, his hopes and fears, his aspirations and machinations, his pride and greed, his racial consciousness and hallucinations. Both his external and internal lives are explored. Hence from the thematic, structural points of view the title of the play is quite suitable. Jones is the emperor with a distinction. He is superior both to the English trader Smithers and to the other natives on whom he rules. Even he lives like a king. He is killed not by an ordinary bullet but the silver bullet. Thus, he is able to preserve the legend he had created. Hence, both in his life and death he is the emperor.

The title of the play is also a fine instance of O’Neill’s use of irony. The full name of the hero of the play is ‘Brutus Jones’. Jones is every man and Brutus implies the irrational (brute’ in every man). It is ironical that a mere brute, an irrational animal, should be the emperor. Jones’ death is pathetic and ironic rather than tragic.