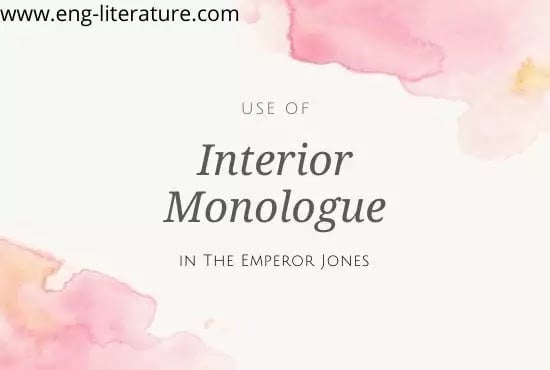 Interior Monologue in The Emperor Jones

The technique of interior monologue means the use of the speech of a character to himself. He himself is the speaker and listener. He uses this device to open his mind, to reveal his inner being, his dreams and desires, fears and anxieties, his aspirations and emotions. Since The Emperor Jones is a psychological drama or expressionistic play, the dramatist has used the technique of the interior monologue very effectively and successfully. The device is used to express the soul or psyche of a character, Emperor Brutus Jones.

The first scene and the last scene of the play consist of realistic dialogue in the best manner of O’Neill, but the central six scenes (scene ii to scene vii) which take place at night in the forest, are sustained pieces of the interior monologue of Jones. It is through the use of monologue that we have been given a peep into the terror-stricken, anguished soul of Brutus Jones. A brief analysis of these forest scenes shows a step by step spiritual disintegration and regression of the erstwhile emperor. In these scenes he is seen continuously talking to himself, as visions from his personal past of crime and evil-doing, as well as from his racial past, crowd in upon him.

In scene second we find Jones in the grip of an extremely intensified fear-complex. He is continuously talking to himself in order to get rid of the nervousness and fear to which he has become subject Owing to the woods and the threatening beat of the tom-tom. He has mistaken the route which he should have taken and when he looks for the white stones where he had hidden his food, he finds that they have disappeared.

In Scene third, we have retrospective dramatic monologue in which Jones imagines that he is seeing the ghostly figure of the Negro Jeff whom he had killed in a quarrel over a game of dice. This figure is nothing but a hallucinatory apparition conjured by the over-wrought brain of Jones. He addresses it directly and tries to talk to it.

“Finally, not finding any response, he gets nervous and fires at the apparition with furious rage. The moment the smoke clears away, he finds that he is alone in the forest.”

In scene fourth we find a completely exhausted and miserable Jones, the erstwhile emperor. He tears away the “frippery Emperor trapping’s” from his body. It makes him feel lighter. Throughout he continues talking to himself in a wild fashion. The things which he keeps seeing have made him absolutely nervous. He tries to reassure himself that there are no such things and tells himself:

“You jus’ seein’ dem things cause yo’ belly’s empty and you’s sick with hunger inside”.

Almost immediately after this he has another hallucinatory vision and prays loud to Lord Jesus. His guilty conscience makes him see the vision of that white prison-guard who had whipped him across the back and whom he had killed in a fit of anger. The whole scene is re-enacted on the stage of his mind. He shouts with baffled, terrified rage, lugging frantically at his revolver. He addresses the figure of the guard directly and fires point blank at his back. Immediately the whole vision is blotted out and Jones stands alone in darkness.

In scene fifth, as the night advances, Jones through the forest becomes more and more tormented. His morale has sunk and his loss of courage is no longer kept up. In anguish he sits and moans, raising to “Lawd Jesus, ‘the desperate cry of a poor sinner’, and asserting that ‘De Lawd’ II preserve me from dem haunts.” But his words lack conviction as his faith is not deep enough. As the primitive jungle tightens its grip over Jones, he throws away his shoes, adding truthfully, “Emperor you ‘se gitting mighty low.”

The hallucinatory visions presented in Scenes sixth and seventh, are two of the greatest triumphs of the modern psycho-analysis and the law of mental association. The first of these visions makes Jones feel that he has already been sold as a slave and be finds himself on board a galley where he is plying at the oars like a common galley-slave.

Finally, the unconscious associations in Jones’ mind carry him to the original home of his ancestors, into the dark and dreadful jungles of Africa, where in a horrifying vision he joins in the crooning and dancing of the Congo Witch-Doctor who by a gesture seems to tell him that he must offer himself as a sacrifice in order to appease an angry god. Then the huge head of a crocodile, with wide open jaws, appears on the stage and Jones, hypnotized by the fascinating glare of its green eyes, moves towards it with deliberately slow steps, all the time praying to Lord Jesus to have mercy on him. Then, all of a sudden, the spell is broken and coming out of his trance Jones fires at the crocodile. Immediately the whole vision disappears and,

“Jones lies with fear flat on the ground, his arms outstretched, whimpering, as the throb of the tom-tom fills the silence about him with a sombre pulsation, a baffled but revengeful power.”

Throughout these scenes Jones is alone on the stage. All these six scenes are sustained pieces of interior monologue. Through these monologues of the ex-emperor, his tortured and anguished soul is laid bare before the readers. They are clever pieces of psycho-analysis such as had never before been presented on the American stage. Throughout we are concerned with what is passing in the mind of Jones; our involvement in his spiritual plight is total.