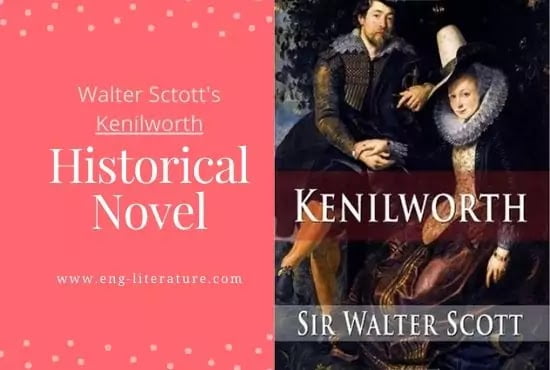 Kenilworth as a Historical Novel

Kenilworth is a historical novel in the sense that it is set against a historical background. The time is that of Queen Elizabeth’s reign. The characters bear historical names, and the main events are also distilled from history. Above all, the spirit of Elizabeth‘s age is exhibited most artistically and realistically.

A number of historical inaccuracies can be mentioned in Kenilworth. Scott always treated history with perfect disregard of inconvenient facts and dates. There are many illustrations of this in Kenilworth. Robert Dudley was the fifth son of the Duke of Northumberland, who was executed by Queen Mary for his attempt to crown his son, Lord Guildford Dudley, the husband of Lady Jane Grey. In the year 1550, Robert Dudley had married Amy Robsart when he himself was but nineteen years old. The ceremony contained no element of secrecy, Edward VI himself being present.

Thus in1560, Dudley had been married for ten years but Kenilworth represents the marriage as of recent occurrence, and Amy’s father and lover in distress because they had not yet been able to find tidings of her whereabouts. Dudley was not at this time Earl of Leicester, title being conferred on him in 1563, three years after Amy’s death, when Elizabeth put him forward as a suitable husband for Mary Queen of Scots.

There are, as historical evidence, letters, written by the then Spanish ambassadors in England. In 1559, De Feria wrote to Philip of Spain that Elizabeth was

“enamoured of my Lord Robert Dudley, and will never let him from her side. His wife has a cancer on the breast and the Queen only waits till she dies to marry him.”

Another letter written by De Quandra in 1560, states that Cecil had told the writer,

“Dudley had made himself master of the business of State and of the person of the Queen…..and that they were thinking of destroying Lord Robert’s wife ….. They had given out that she was very ill, but she was not ill at all; she was very well, and taking care not to be poisoned.”

The conclusion of Kenilworth is mysterious. It is different from the historical records. Leicester determines to kill his wife but relents; his servants go beyond their orders and kill her before their master can prevent them. In real life, however, Varney and Foster have no share in the tragedy and no evidence against them has been found. Scott in his notes has accepted this fact. He says.

“If faith is to be put in epitaphs, Anthony Foster was something the very reverse of the characters represented in the novel.”

Scott has also altered Sir Walter Raleigh out of history. Though the gallant incident of the cloak is the traditional and his historical account of this celebrated statesman’s rise at court, but Raleigh’s pride and boldness have been put to a stake in the novel. In his descriptions of the Cumnor Hall and the Kenilworth Castle, Scott makes use of his poetic gifts; his imagination overpowers his sense of fact. The bedsteads with their furniture, chairs, stools, cushions, carpets, pictures have been described with capitalized details.

Scott was competent to deal with history. He knew a lot of English history. He was called the ‘glutton of books,’ as he had read almost all the great romances, old plays, and epic poetry. He had the contemporary life, such as most of Miss Edgeworth’s. His handling of history in Kenilworth may not be precisely historical, but it is plausibly historical. He aims at depicting the manners and customs’ of the time of Queen Elizabeth.

The main interest in Scott’s historical novels is often not historical and the historical interest is at least always divided with purely fictitious interest. In Waverley, the hero and heroine are historical ; and the same is true of Old Mortality, Ivanhoe, The Fortunes of Nigel and The Abbot. Kenilworth is different only in appearance. Amy Robsart bears a historical name but she is really the typical tragic heroine, and Leicester is the conventional villain with some facts taken from Dudley’s life for a historical semblance. The attention is thus distracted from Elizabeth, Mary, James, Cromwell, and the young Stuart Pretenders. In adopting this method of dealing with history, which was in part Shakespeare’s also, Scott was able to give within the vaguely defined boundaries of fact and legend, a very free play to his imagination.

Hence Kenilworth is realistic when it deals with lowly life, but the prevailing mood is romantic with historical bias. It is not a pure history; it is a beautiful blend of history and romance.