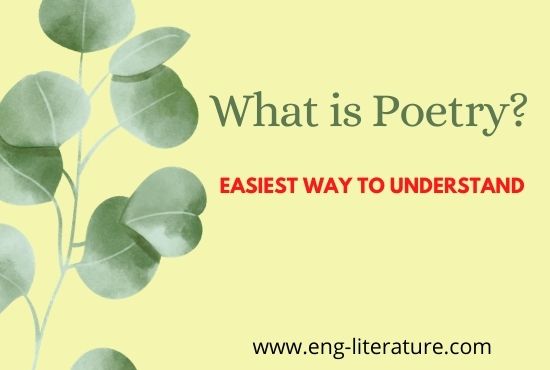 It is difficult to define poetry in cast-iron formula; Poetry has been variously defined. Johnson defines poetry as ‘metrical composition’; Wordsworth defines it as the “spontaneous overflow of powerful feelings”: he further says that poetry “is the impassioned expression which is in the countenance of all science”. According to Matthew Arnold, poetry is “simply the most delightful and perfect form of utterance that human words can reach”. Edgar Allan Poe says that poetry is “the rhythmic creation of beauty”. Mr Watts Dunton defines poetry as “the concrete and artistic expression of the human mind in emotional and rhythmical language”.

These definitions of poetry are not exhaustive enough to include all the elements of poetry, nor do they recognize what is specifically called poetry. We can no more define poetry than we can define life or love. But we can understand what is poetry by its attributes and by its effects upon us. Poetry expresses some feelings and attempts to awaken the corresponding emotions in the heart of another. The greatest poet is he who has felt the most of all the things that move the hearts of men and felt them most deeply, and can touch the most hearts to sympathy.

Literally the term “poetry” (ancient Greek: poieo – create) is an art form in which human language is used for its aesthetic qualities. The Greek verb poieo (make or create), gave birth to three different words: poietis (the one who creates), poiesis (the act of creation), and poiana (the thing created). From where we get three English words: poet (the creator), poesy (the creation) and poem (the created). A poet is therefore one who creates, and poetry is what the poet creates.

Poetry attempts to communicate a genuine emotion. Poets who are more sensitive than the ordinary men are moved by the beauty of things and seek to transmit that sense of beauty in others. Art finds and reveals beauty in everything under the sun. It is not the thing but the saying that moves us, not the matter but the manner of its presentation. An artist can make sad things beautiful and sordid things wonderful as Hardy has done in his novels and poetry. Creation of beautiful forms and communication of pleasurable feelings through these forms are the staple of good art.

Mr. G. K. Chesterton in his clever attack on Mr. Hardy’s art, assumes with Matthew Arnold that ‘art should show us things as they are’ ; but art has nothing to do with the truth of things as they are, but with the impression they make on the artist’s mind. Art is the expression of the artist’s mood, not the representation of objective fact. “To a poet in a lover’s mood the sea smiles with him in his joy, the winds whisper the name of his beloved, the stars look down on him like friendly eyes, to the same poet, in another mood, the same sea looks grim and cruel, the winds mock his sighs, and the cold stars watch him with a passionless inscrutable gaze.” Thus in poetry, the emotion imagination of the poet plays a significant part in the interpretation of life. The poet interprets life as it shapes itself through his mood and imagination

Emotion is not poetry, but the cause of poetry and emotional expression is only poetry when it takes a beautiful form. To exist as poetry, emotion must be translated into music and visual images, clear and beautiful. Ideas are given emotional equivalents in poetry and made vivid and inspiring through music and pictures.

Aristotle defines poetry as ‘modes of imitation of human actions.’ He also indicates the importance of imagination. A poet is a creator, not a mere imitator of reality. A. C. Bradley says : poetry strikes us as ‘creation’, and the nature of poetry “is to be not a part, nor yet a copy of the real world…but to be a world by itself, independent, complete and autonomous”. A poet, however, interprets life in objective terms and the values contained in a poem are embodied and dramatized in the poem’s evolving meanings, imagery and symbols. Thus music, images, words are important in offering the poet’s interpretation of life.

It is true that music, words and images are important for creating an objective picture of truth in poetry, but mere technical virtuosity or sheer music is not enough for good poetry. The vital distinction between music and poetry is that while music enchants us by pure sound, the appeal of poetry springs from the effect upon us of sound with a clearly defined intellectual content, perfectly fused with it. Poetry has not only an emotional appeal, it has an intellectual appeal. Its intellectual appeal derives from the words and images which are intellectual symbols of the poet’s emotion.

Again, sheer music or mere tapestry of words and images cannot satisfy the readers. There must be some meaning in a poem. Spenser’s exquisite melody expresses some facer of his beautiful self, while Swinburne’s poetry cloys us with mere virtuosity. The essentially poetic quality in a poem is to be sought not in an alliance with music, not in an alliance with prayer, but in the perfect rightness of language to convey a passionately felt experience.

Poetry is generally of two kinds- subjective poetry and objective poetry. The lyric belongs to subjective poetry because a lyric is the expression of the poet’s personal feelings. It is contrasted with the epic and dramatic poetry because in lyric poetry, the poet is principally occupied with himself. A lyric poet expresses his own mood, feeling or emotion that comes to him at a particular moment. He communicates his deeply-felt emotion in words and passes it to the reader, and if the reader is moved or thrilled by the emotion of the poet, the poet is said to be successful. Personal lyric poetry passes into meditative and philosophic poetry in which the element of thought is important. Here thought is given an emotional equivalent and is made vivid and moving by the beauty of imagery and richness of language.

Wordsworth’s Lines Composed on a few miles on the Tintern Abbey is a philosophical poem. But Pope’s Essay on Man is a versified treatise rather than a poem. Elegy and Ode fall into the category of lyric poetry.

But in objective poetry, the poet is not intrusive; the poet remains more or less in the background. But in lyrical poetry the poet is very much in the foreground and is self-intrusive. He speaks in his own person and impresses us with his own thoughts, feelings and moods. But in objective poetry, the poet creates characters and situations and speaks out their thoughts and emotions with detachment. His interpretation of life gleams forth through the impersonal forms that he creates. Such impersonal poetry falls into two groups-narrative poetry and dramatic poetry.

A narrative poem is one that tells a story. There are different types of poetry. The two basic types are epic and ballad. Metrical romance is considered a third basic type. Story telling in verse form is thought to have its beginning in the chanting of myth relating to ritual. Both ballad and epic were originally sung or chanted. It was usually accompanied by a musical instrument, the function of which was to maintain the poetry rhythm of the line and of composition. The ballad is a short story in verse and it is mainly occupied with the narration of tales of adventure, fighting and valour. Many of these ballads have immense dramatic power and wonderful metrical skill.

The epic has a larger canvas, a greater variety of characters, elevation of style and sustained narrative power. Many poets of the nineteenth century had a shot at narrative poetry. Thomas Percy’s Reliques of Ancient English Poetry marks the revival of ancient ballad poetry, Sir Walter Scott’s The Lay of the Last Minstrel, The Lay of the Lake, Marmion are good narrative poems. Samuel Taylor Coleridge’s The Rime of the Ancient Mariner, Christabel, Wordsworth’s Michael, The Prelude, Byron’s Childe Harold’s Pilgrimage, Keats’ The Eve of St. Agnes, Tennyson’s Idylls of the King are good examples of modern narrative poetry.

Dramatic poetry is to be distinguished from the drama proper. Browning excelled in writing dramatic poetry in which a character is depicted under the impact of an intense situation. The character speaks out his mind under the stress of the situation. A background is etched and the character is revealed through his self-communings. Robert Browning’s The Last Ride Together, Rabbi Ben Ezra, My Last Duchess, Tennyson’s Ulysses are examples of dramatic poetry. Here the poet creates characters and depicts them with detachment. The poet does not intrude on the poem. But it has all the ingredients of poetry–music, rhyme, images and pictures. Shakespeare’s plays have good dramatic poetry.

The limits of categories shift from generation to generation. The poetic categories such as lyric, narrative and dramatic are not wholly fixed. The 20th century has prized the dramatic highly: thus its emphasis is to show rather than tell. According to modern critics like Hume, T. S. Eliot, etc, all arts aim at objectification of feelings. Thus arts are impersonal because they seek to obliterate the personality of the author from the works. Modern poets speak through interior monologues or assume masks. T. S. Eliot pleads for the extinction of personality and dramatization of poetry. The image pattern, words and expressions, according to this theory are important. The poet’s reading of life is rendered in objective terms-his set of values are embodied and dramatized in the poem’s evolving meanings, imagery and symbolic action.