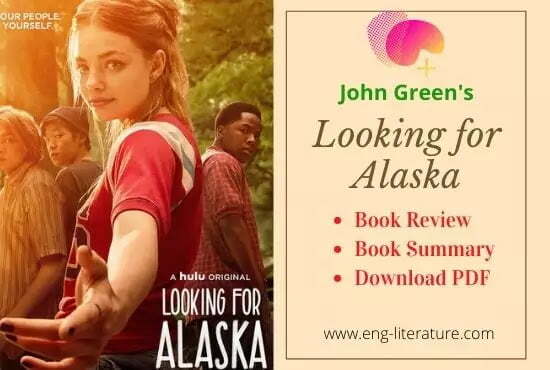 Looking for Alaska is a very popular Teenage Romance by a famous America Novelist, John Green.

Miles Halter, the protagonist of the story lives in Florida. He is not a social person and is in search of his “Great Perhaps”. He has a fascination with peoples’ final words before death and is obsessed with studying. He begs his parents to send him to Culver Creek because he knows that he does not fit in at the high school in his hometown.

There he makes his first friend Chip, known as “the Colonel” by all. He nicknamed Miles as “Pudge” and called him with the same name throughout the book. The Colonel introduces him to his friend, Alaska, who was a fierce and mysterious girl. Miles instantly falls in love with her. The book turns out to be a High School Romance. All of them are then involves in various pranks and mis-happenings.

The Before part is filled with a lot of high school events, the building of relations, the pranks that student plays and all. Yes, the typical high-school environment has been explained. There’s a lot of talking, drinking, smoking, lusting after a girl that doesn’t want you back, and so on.

The After part describes what happens after that tragic event, how the truth unfolds and how the lives of everyone involved changes. The Before part is kind of happier while the After is the one with lots of sorrow and heartbreak.

It is a gripping tale. It is not a typical boy-meets-girl-falls-in-love-then-separate kind of story. It is a tale of true friendship, the effect of love, the longing for survival, the void in a relationship.

This coming-of-age novel is gorgeously written, passionate, hilarious, moving, thought-provoking, character-driven, and literary. It deserves all the awards it’s won. The characters may often behave badly, but they are vividly real, complex, and beautifully drawn — and their stories can help readers start dealing with some big topics, like self-discovery and loss. Looking for Alaska is a hard one to put down. Since new chapters don’t start on new pages, there’s always a temptation to read just a little bit further. For the first half at least, readers will be grinning all the way — and in the end, they will be moved, maybe even to tears.

Sure enough, I would recommend you “Go for it!” “Looking for Alaska” will amaze you with what it has to offer.

Looking for Alaska is described by a sixteen-year-old kid, Miles Halter, who abandons his ordinary life in Florida to go to a life experience school called Culver Creek. He is motivated by histories enumerating the experiences of outstanding figures during their days at live-in school. The most of all, he is propelled by the thought of a “Great Perhaps”. Miles has an interest with renowned final words, and especially with the final expressions of the artist Francois Rabelais: “I go to seek a Great Perhaps.” This thus gives the main impetus to Miles’ endeavor to fashion another life.

Miles comfortable adjusts himself at Culver Creek and becomes good friends with his roommate, Chip, and becomes good friends with his roommate, Chip, whose leadership and planning skills have earned him the nickname “the Colonel.” He additionally gets captivated by one of the Colonel’s dear companions, Alaska, who is lovely, coy, and cryptic. While Alaska discovers Miles “adorable,” she as of now has a sweetheart and consequently willingly volunteers to set Miles up with a young lady named Lara. Be that as it may, while Lara is sweet, Miles is significantly more attracted to Alaska.

Over the passage of time, Alaska shows herself to be moody and emotionally volatile. Most frustratingly, she will not clarify the purpose behind these state of mind shifts, however she makes enigmatic references to her uncouthness and cases that she has no home. Miles gets irritated and reveals to Alaska that he once in a while battles to get her. Her response is that he has fallen in love with an idealized image and that he only likes her fun, vivacious side.

Alaska is intrigued by the concept of “the labyrinth,” as featured in Gabriel Garcia Marquez’s The General in His Labyrinth. This book concerns the last days of the military chief Simon Bolivar, whose final words are referred to as ““How will I ever get out of this labyrinth!” Alaska initially wonders whether the labyrinth refers to life or death, however she at last concludes that it alludes to anguish. In her eyes, life is described by anguish.

Alaska is inclined to thinking about existential issues, and attending a class titled World Religions encourages Miles to muse upon similar topics. He is in awe of the teacher, Dr. Hyde, who prompts him to take religion seriously for the first time, and he takes a particular interest in Buddhist concepts. When the students are asked to formulate an essay topic, Miles chooses to address the question, “What happens to people after they die?” He initially has only vague ideas, and he feels that people cling to the idea of an afterlife due to fear of the alternative.

Reality with regards to Alaska rises when she induces a drinking game, which requires every member to depict the best and most exceedingly awful days of their life. We become familiar with some noteworthy info during this part of the novel, yet Alaska’s own reaction is the most enlightening. She classes the greatest day of her life as the day that her mom went with her on a school outing to the zoo, while her most exceedingly terrible day was the following day, when her mom passed on of an aneurysm. In addition to the fact that this was upsetting for Alaska, she had been distant from everyone else with her mom when it occurred and was incapacitated with dread. She therefore neglected to call 911, and she has been tormented by blame from that point forward.

Despite being in a relationship, Alaska kisses Miles one evening as part of a game of truth or dare, and Miles feels the impulse to tell Alaska that he loves her. However, Alaska leaves to answer a phone call only to return in a state of hysteria. She will not say what is wrong, but she insists that she has to leave the campus. Though she is drunk and panic-stricken, she is so insistent that Miles and the Colonel let her go.

The following day, it is uncovered that Alaska has died in a car crash, and Miles and the Colonel feel devastated and culpable. Hoping to gain some insight into what happened, they sketch out a plausible train of events. It would seem that Alaska had been drawing a picture of a flower while talking to her boyfriend on the phone and this led her to remember her parents putting white flowers in her hair when she was a child. This at that point achieved the acknowledgment that she had overlooked the commemoration of her mom’s passing. This prompted her furious takeoff from the grounds, with her goal probably being to put blossoms on her mom’s grave (white tulips were found in her vehicle). Notwithstanding, it stays a puzzle whether her passing was unplanned or whether she settled on a very late choice to end it all.

Having learnt all that they can about Alaska’s death, Miles and his friends attempt to move on with their lives. Still, Dr. Hyde leaves Alaska’s question—“How will we ever get out of this labyrinth of suffering?” (158)—on the blackboard for the students to ponder. Both Miles and the Colonel agree that life is marred by suffering, but the Colonel would rather stay in this “labyrinth” than depart in the same manner as Alaska. As for Miles, he believes that forgiveness is the only way out. It is easy to become plagued by guilt and recrimination, and Alaska had let her guilt destroy her. Miles could do likewise, but he regards Alaska as a cautionary tale.

Miles has now finished his own World Religions essay, and he no longer feels that death is the end. He believes that energy can manifest itself in different forms but can never be destroyed. He consequently imagines that Alaska is out there somewhere, and he hopes that this somewhere is beautiful.