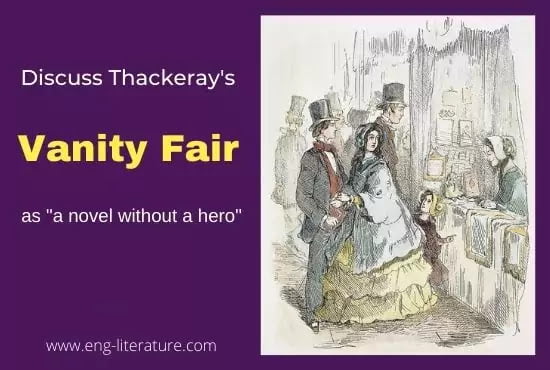 Vanity Fair as a Novel Without a Hero

Thackeray has called Vanity Fair, “a novel without a hero” and other like Elizabeth Drew, have said, “if the novel has no hero, it has two heroines”. Before discussing whether Thackeray’s masterpiece has a hero or a heroine or not, let us first examine the qualities of the hero of a novel. First the hero must have certain qualities which are considered heroic. He must be brave, a man of valour, fearless, noble, generous and self-sacrificing. He must be heroic enough to master his circumstances. Secondly, he must be the centre of interest in the novel and the rest of the story should be surveyed through his eyes.

Judged from these standards none of the male character in the novel can be called its hero. There are four male characters- Jos Sedley, George Osborne, William and Rawdon Crawley-none of them has the qualities.

Is Jos Sedley a Hero?

Jos Sedley, fat, shy, boastful and gormandizing is a figure of fun, and not a hero. He is a coward who runs away from the war-torn Brussels, leaving even his own sister alone and unprotected. Finally, he falls a victim to Becky Sharp and is (most probably) poisoned by her. Neither is he the centre of interest in the story. His appearance on the scene is brief and fitful and he remains off the stage for long periods.

Is George Osborne a Hero?

George Osborne, too, is equally unheroic. He is a snob, haughty and arrogant. At school he looked down upon Dobbin because he was the son of trader, and later on he is ready to give up Amelia when asked to do so by his father. He is neither a good lover, nor does he turn a good husband. He flirts with Becky and is ready to elope with her soon after his marriage. He is selfish, inconstant and unfaithful. He buys presents for himself instead of for Amelia and gambles and drinks in the company of his friends and leaves Amelia alone. Moreover, he is not the centre of interest in the story for he is killed in action and so removed from the scene quite early in the novel. He may be the hero of Amelia, but he is certainly not the hero of the novel.

Is William Dobbin a Hero?

William Dobbin, no doubt, is noble, generous, and self-sacrificing, but he, too, has nothing heroic about him. Most of the time, he remains in the background as a kind of wooden norm. No doubt he is chivalrous and self-sacrificing in the way in which he constantly helps Amelia. It is he who brings George Osborne and Amelia, and later on it is through him that Amelia is reconciled to old George Osborne. But his very devotion to Amelia smacks of stupidity. He himself discovers in the end that she is cold and selfish and not at all worthy of his devotion. Besides this he suffers from a lack of confidence. Physically he is ungainly, with his large hands and feet, and large ears. His very name suggests someone uncouth and slow in wits.

Is Rawdon Crawley a Hero?

Rawdon Crawley does strike us as heroic in the beginning of the novel. He is a handsome and dashing young gallant, a favorite of his rich aunt, Miss Crawley, and popular with his colleagues in the Regiment. Moreover, he marries Becky Sharp, the most important character, the central personage, in novel. However he soon degenerates, first into an “unscrupulous adventurer, and then into a mere follower and shadow of his wife.” We find that he gambles, cheats tradesmen and innocent people like Miss Briggs and Raggles, and thus lives luxuriously on nothing a year. He is overshadowed by his more intelligent and resourceful wife, and soon becomes a non entity, merely, “Mrs. Crawley’s husband”. The only heroic act he does in the novel is the way in which he strikes Lord Steyne. However, he is shipped to Coventry Islands soon after, where he dies ultimately.

Is Amelia a Protagonist?

Thus there is no male character who might be called the hero of the novel and Thackeray was justified in saying that Vanity Fair is a novel, “without a hero”. However, this does not mean that it has a heroine instead. We cannot agree with the view of Elizabeth Drew that, “if the novel has no hero, it has two heroines”. She regards both Amelia and Becky as the heroines of the story.

She regards Amelia as the heroine, for she is the only character in the novel who matures and grows and finally recognizes, “that beautiful and generous affection of Dobbin”. However, we cannot call her the heroine of the novel merely for this reason. She is too stupid and muddle-headed, too weak and passive, to be the heroine. Her devotion to the memory of George Osborne is stupid, and her failure to appreciate the generosity and devotion of Dobbin is equally foolish. Major Dobbin is right in his estimate of her as cold and selfish. She is a passive character, a victim, rather than an energetic, dynamic, character as a heroine should be.

Is Becky Sharp a Heroine?

Neither can Becky Sharp be regarded as the heroine of the novel. Elizabeth Drew regards her as the heroine because she is dynamic and energetic, because she puts in a dauntless fight for a secure and comfortable position in society. She is tactful and intelligent, she knows the art of pleasing others, and all the characters in the novel are impressed and pleased with her. Her presence imparts energy and zest to the story, which flags whenever she is off the stage. It is for this reason that A. E. Baker also regards her as the heroine of the novel. In his she is the heroine of the novel in the same sense in which Satan is the hero of Paradise Lost. Both are rebels, both are dynamic and energetic, and both have the peculiar fascination of evil about them. Moreover, she is the chief personage centre of interest in the novel. She is connected with a important characters and her social relationships form the ‘hub’ and centre of the novel.

The Reasons Why Becky is not a Heroine

However, she cannot be regarded as the heroine of the novel for she is a bad character, a wolf and not a lamb, entirely bold, passionless and unscrupulous. She is a rogue and a villainess, an adventuress rather than a woman with ‘heroic’ qualities. David Cecil is nearer the truth when he says that the centre of the book is vanity fair itself, and not any one figure.

In the present novel that panorama of life which is the real subject of all Thackeray’s books is openly the subject; here, writing about Vanity Fair, he openly calls his book Vanity Fair. And it is the salient fact about Vanity Fair, in Thackeray’s view, that it admits no heroes. To be heroic is to dominate circumstance, but in the Vanity Fair of Thackeray’s imagination everyone is the slave of circumstance. In Vanity Fair none is heroic, all are equally self-deceived, equally the victim of some folly and frivolity, and equally disillusioned in the end.