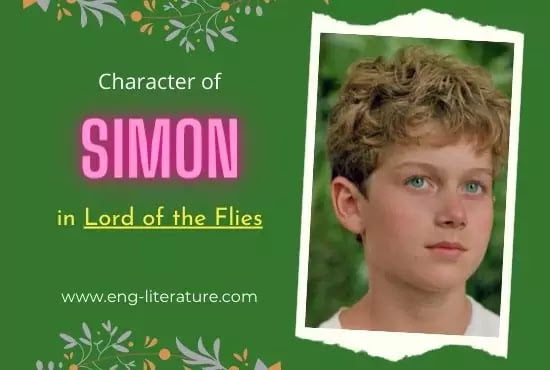 Lord of the Flies Simon

William Golding‘s thesis in the Lord of Flies is that man is a combination of good and evil; man is at once heroic and sick. Here, on the one side we have Jack, a follower of Beelzebub and on the other side; to represent the good of man we have Simon. Simon was meant to be a saintly type of person as in his discussion with Frank Kermode Golding called Simon “a Christ figure”. Even from his physical appearance he seems to be Jesus. He is a small, thin boy with a pointed chin and very bright eyes. He has long, coarse, black hair over a low, broad forehead. Like Jesus he goes barefooted.

Simon’s Personality in Lord of the Flies

Apart from his physical appearance, his manners too speak volume that he is a mystic. He is vastly different from all other boys and his behaviour is really intriguing to us. He is very cooperative to everyone. He is the only boy who helps Ralph in building shelters. He loves his fellows. For example, he shows his love for Ralph by stroking arm. He picks fruit for the littluns who cannot reach it. He is also very sympathetic to Piggy. He gives Piggy his own share of the meat when the latter has none and resultantly incurs Jack’s wrath. He retrieves Piggy’s glasses for him when Jack snatches them. His compassion extends even to the dead as he frees the parachutist from the rocks.

Simon is a very bold and fearless boy. At many critical moments he attracts our attention due to his bravery. For example, when Ralph, Jack and Roger are hunting for the beast and their expedition is delayed, it is he who volunteers to go back through the forest alone to Piggy and the littluns without experiencing the least sensation of fear. Again, when Ralph and Jack report the discovery of the beast on the
mountain Lord he asks them to go up the mountain.

Simon is a mystic who possesses the foreknowledge of coming events. He tells Ralph that he would surely get back home sooner or later. Thus he foretells his eventual rescue. He does not believe in the existence of beast instead he thinks that beast is within us. Like all mystics he wants to expel this inner beast which instigates man to do evil. As we read:

Whenever Simon thought of the beast, there rose before his inward sight the picture of a human at once heroic and sick.

However, as Simon loves his fellows, he wants to relieve them from the fear of the beast. He alone goes to the top of the mountain and there discovers the actuality of the beast. He frees the dead body of the parachutist from the rocks and then rushes down to inform the boys about the truth. But this discovery brings about his assassination like Christ.

Simon has many symbolic affinities with saints and prophets. We know that mystics and prophets have experienced hallucinations and fainted on the mountain when they were in communion with God. Thus like all prophets Simon is on the mountain. He tells others that what they have erected as the beast is harmless, though horrible. He knows that evil is within man.

His greatest visionary experience is with the Lord of the Flies. He recognizes the devil, evil — the fundamental disease of man. He resists the temptation only by saying and doing nothing. The beast prevents the boys from keeping the fire and rescue signals going. Simon cannot believe in “a beast with claws”. He sees the lord of the flies, Beelzebub, the devil. He keeps quiet, although he knows the truth; because to make others see the truth is dangerous. When he has discovered what the beast really is, he goes down crying “the beast” only to be murdered by savages. Thus he has many parallels with Christ.

The prophets and mystics are not often heeded by their followers. Jack hates him for his constant faints. Only Ralph and the twins accept him. When he tries to speak, the assembly jeers at him; yet he is the only boy on the island who selflessly suffers for others from the building of the shelters to the warning of the beast and is eventually killed. Thus he is a life as well as a symbol.

To Mark Kinkead, he is the first child on the island to know what the island and its jungles are like. He is in solitary communion with nature. He is outside the hunter mentality, outside the leader mentality, outside even himself. He recognizes the heat, the dampness and mysteries of the forest, its purity, beauty and peace. These qualities of acceptance and inclusion give us the “Simon-ness of Simon.”

Jesus was a carpenter and a builder but Simon prefers the natural house over the man made one. He likes to sleep out at night, when the others use sleeping in the shelters. He maintains a secluded place in the thick of the forest, where he perhaps meditates. This shows his bravery as well as intuitive wisdom. The other boys think he is “cracked” and “crazy” because they cannot understand him. Thus his intelligence, like that of Jesus, goes beyond the immediately visible.

Simon’s death is the fact on which the whole novel turns. It is the most terrible incident of the novel which seems quite unconvincing. By the high wind on the mountain top the dead body of the parachutist is swept across the beach into the sea. Thus the parachutist is subsumed in Simon as his body also moves into the sea, hence beautified and purified.

For Jack, Simon’s death is a catalyst. After his death, he is scared. He and his hunters try to protect themselves with the huge rock placed over the entrance and have sentries posted. They still see the beast. In fact Simon’s death means an end to all that the conch stands for.

Simon Lord of the Flies Quotes

Maybe there is a beast… Maybe it’s only us.

You’ll get back all right. I think so, anyway.

a secret place in a clearing full of flowers and butterflies

5 thoughts on “Simon in Lord of the Flies | Character Analysis”