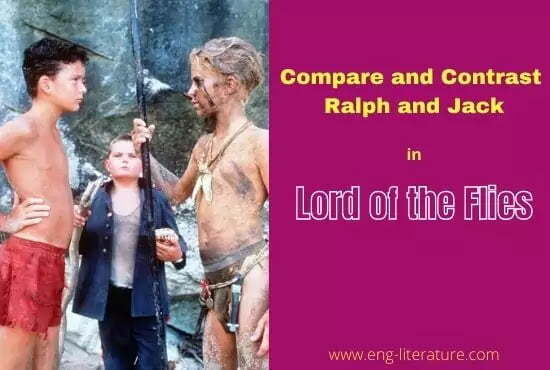 Ralph Lord of the Flies

Golding’s novel Lord of the Flies depicts the war between good and evil. Ralph, in this war stands for democratic values, cherished by civilized world, whereas, Jack stands for tyranny and usurpation exercised by all the dictators of the world. In fact Ralph’s life at the island is the story of a journey from innocence to experience. Ted E. Boyle thinks that

Ralph and Simon do not wish the beast to rule. They wish a society which in its respect for the conch and tending of the signal fire, reaches beyond the animal level.

Had Lord of the Flies been a conventional novel, Ralph would have been its hero. He is the central character of the novel as most of the events, reactions and descriptions are seen through his eyes. He is about twelve years of age and impressive physically, but there is “mildness about his mouth and eyes that proclaimed no devil.” By virtue of the possession of conch and his calmness, he is the natural chief. He owes much to Piggy‘s intelligence though he seldom acknowledges it.

As his father is a commander in the navy, he inherits a sense of authority and reasons clearly. He possesses a wonderful political sense as well. He believes in democratic principles of election through voting. That is why, when the question of the selection of chief arises and Jack asserts his authority. Ralph suggests that the chief should be chosen through voting. Further, he realizes that as a chief he will be resented by Jack, therefore, he pacifies him by giving him his hunters.

His sense of priorities shows his leadership qualities. His very first speech reveals that he is a responsible person and thus can organize. Being a leader, rescue and shelter are his primary concerns. Like a good captain he reprimands boys when they show negligence to their duties though it invites wrath of Jack and his company. He establishes rules for the assembly and decides that he who holds the conch will address the assembly.

He has a balanced mind as he does not believe in the existence of ghosts or beasts. He does not indulge in games when there is more important business to attend to. However, he is also enchanted by the beauty of the island. As he says:

While we’re waiting we can have good time on this island. This is our island. It’s a good island. Until the grownups come to fetch us we’ll have fun.

But his tolerance and open-mindedness cause to some extent his fall. He does not understand Simon, he does not appreciate Piggy’s common sense. He does not turn violent when most of the other boys do.

When he becomes chief he immediately realizes the need for adult behaviour. Earlier all follow him and recognize his authority. But his first real crisis begins when Jack and his hunters let the fire out. His summoning of an assembly after the feast shows his moral courage. Although he loses his popularity among the boys, yet he asserts what is right and what they should do. As he says:

What is better, law and rescue or hunting and breaking things up.

When Jack asserts the power of the hunters and the majority follows him, Ralph is very cautious. Therefore, when majority calls for the meat, he agrees to go on the hunt, but is more concerned for the shelter and littluns. He does not lack courage, as he climbs the mountain and sees the reality of the beast. But he realizes the fact that Jack is now bent upon ousting him.

Although all desert him, Piggy and Simon are murdered, yet he never loses sanity. After Jack’s success as a leader. he is hunted like a pig, but he proves to be natural leader. His fall shows that his ideals have been crushed and that evil triumphs. At this last stage the author thus describes Ralph’s state of mind:

He (Ralph) forgot his wounds, his hunger, and
thirst, and became fear: hopeless fear of lying feet, rushing through the
forest towards the open beach……… Then he was down rolling over and over
in the warm sand, trying to cry for mercy.

Compare and Contrast between Ralph and Jack

Ralph is protective towards the littluns on the island while Jack ignores them completely. He captures Samenric, the twins and tortures them to disclose Ralph’s hideout in the forest. While Ralph seeks to dispel their fears of the beastie or the snake thing. He builds shelter for their protection, while Jack and his hunters destroy them, steal Piggy’s spectacles. Ralph is introspective while Jack is a born hunter.

The rift between Ralph and Jack leads to disastrous consequences because the evil in Jack proves to be much stronger than the good in Ralph.

In certain aspects Ralph and Jack are alike as leaders because they both want to lead in their own way. However their aims are different – Jack wants to hunt and Ralph wants to be rescued. Jack is the autocratic, less caring leader whereas Ralph is democratic and tries his level best to do good for the boys in the island.

Ralph represents the boy of character and sensitivity. He tries to face in an adult way a situation quite beyond his control. He has integrity, compassion, courage, authority and a strong awareness of the values of civilization. He strives for what is good and right against what is wrong and evil. He fails and in his failure we see mankind’s failure to deal with the forces of evil. However, with his rescue we feel that good will eventually be rescued from the clutches of evil. William Goodling may be pessimistic about the nature of man, but like Hardy he is not pessimistic about the governance of this universe.