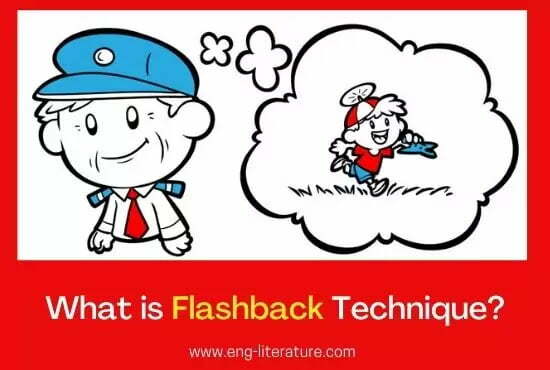 Flashback is a convenient technical device in a novel or a drama to show events that happened before the point when the work opens. It is a convenient means to carry the mind back to the past events. Scenes or narratives are interpolated in the middle by way of memory or a reverie or of a confession by one of the characters. This device is extensively used in films. But now it is put to great artistic use in the novels.

Flashback, etymologically means “…a scene in a film, novel, etc. set in a time earlier than the main story.” It is a literary or cinematic device in which a past event is inserted into the normal chronological order of a narrative.

Flashback technique is generally used in novel and short story to project the scenes, episodes occurs before the story begins. This literary technique is used by the writer in order to better understanding of the plot and characters with critical insight.

Virginia Woolf in her novel To The Lighthouse uses this method. Lily’s revelations and reminiscences and James’s memories in the boat serve as flashbacks to the earlier events.

In Sons and Lovers, the narration moves backward and forward in time.  In chapter III of the book there is constant alteration between the panoramic view of the longer community and the ce up of the Morel family.

In A Tale of Two Cities, the antecedents of Dr Mannette’s life are disclosed in a flashback. In the chapter The Substance of the Shadow, we get to know Dr. Mannette’s captivity and the tyranny of the Marquis of Everemonde from a paper which he had written in 1767 and hidden in the cell no 105, North Tower.

Arthur Miller’s play Death of a Salesman and Ingmar Bergman’s film, Wild Straw-berries make persistent and skillful use of this device.

Conrad and many modern novelists cleverly adopt the flashback method. The indirect and oblique method of narration followed by Conrad depends very much on the clever use of backward-forward movement. In Lord Jim the incidents happening on The Patna are indirectly presented by Marlow through flashbacks as well as through forward narration of events. Much of the interest of the novel, depends on reverie and reminiscences.

In Emily Bronte’s Wuthering Heights, the flashbacks show the development of the love that Heathcliff and Cathy had for each other, and how their poor decisions separated them.

Flashbacks allow readers to get overview on the background, characters, plot, motives, and conflict of any literary composition.