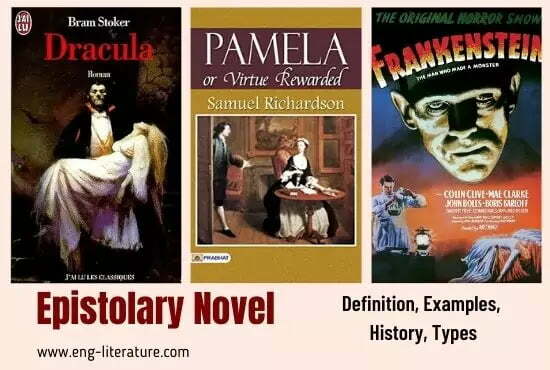 The word epistolary is derived from the Latin ‘epistola’ which means a letter. The word epistle is an ancient term used to mean a letter.

An epistolary novel is a novel whose story is told through a series of letters. Benét’s Reader’s Encyclopedia defines the term and explains that ‘the form was first popularized by the 18th century novels Pamela and Clarissa Harlowe by Samuel Richardson.’ Some definitions of the form include diary entries and other documents. While to some scholars an epistolary novel is a novel written as a series of documents. The usual form of an epistolary novel is letters, although diary entries, newspaper clippings and other documents are sometimes used. Recently, electronic “documents” such as recordings and radio, blogs, and e-mails have also come into use.

In such novels which are otherwise told in third person, letters allow the reader to hear the characters’ voices more intimately. They also give an impression of immediacy and authenticity. Unlike works of the 18th century, contemporary novels rarely rely solely on letters to tell a story.

An epistolary novel is also called a novel of letters, because the narration takes place in the form of letters, possibly journal entries and occasionally newspaper reports. An epistle is an archaic term for a letter. The epistolary novel is an interesting literary technique, because it allows a writer to include multiple narrators in his or her story. This means the story can be told and interpreted from numerous viewpoints.

The first true epistolary novel was the 17th century work, Love Letters Between A Nobleman and His Sister penned by Aphra Behn. Unlike many novels to follow, several volumes of the work also include the voice of a narrator, who ties together letters and comments on all of the characters. This aspect would disappear in later works when the epistolary novel became popular in the 18th century.

Of these 18th century works, the most famous epistolary novels were those of Samuel Richardson. Both his novels Pamela and Clarissa were novels of letters. The French novelist Pierre Ambroise François Choderlos de Laclos wrote one of today’s most recognizable epistolary novels Les Liaisons Dangereuses (Dangerous Liasons), which has been the inspiration for modern plays and two popular films, Dangerous Liasons and Valmont.

The birth and development of the epistolary novel is based on two theories. The first theory claims that the genre originated from novels with inserted letters, in which the portion containing the third person narrative in between the letters was gradually reduced. The second theory claims that the epistolary novel arose from miscellanies of letters and poetry: some of the letters were tied together into a (mostly amorous) plot. Both claims have some validity.

The first truly epistolary novel, The Spanish Prison of Love (Cárcel de amor) (c. 1485) by Diego de San Pedro, belongs to a tradition of novels in which a large number of inserted letters already dominated the narrative.

The founder of the epistolary novel in English is regarded by many to be James Howell (1594-1666) with “Familiar Letters” who writes of prison, foreign adventure and the love of women,

The first novel to expose the complex play that the genre allows was Aphra Behn’s Love Letters Between a Nobleman and His Sister (1684), which appeared in three volumes in 1684, 1685, and 1687. The novel shows the genre’s results of changing perspectives: individual points were presented by the individual characters, and the central voice of the author and moral evaluation disappeared.

The epistolary novel as a genre became popular in the 18th century in the works of Samuel Richardson, with his immensely successful novels Pamela (1740) and Clarissa (1749). In France, there was Lettres Persanes (1721) by Montesquieu, followed by Julie, ou la nouvelle Héloise (1761) by Jean-Jacques Rousseau, and Laclos’ Les Liaisons dangereuses (1782), which used the epistolary form to great dramatic effect, because the sequence of events was not always related directly or explicitly.

In Germany, there was Johann Wolfgang von Goethe’s Die Leiden des jungen Werthers (1774) (The Sorrows of Young Werther) and Friedrich Hölderlin’s Hyperion. The first North American novel, The History of Emily Montague (1769) by Frances Brooke was written in epistolary form.

In the 18th century, the epistolary form was subject to much ridicule, resulting in a number of savage burlesques. The most notable example of these was Henry Fielding’s Shamela (1741), written as a parody of Pamela. In Shamela, the female narrator can be found wielding a pen and writing her diary entries under the most dramatic and unlikely of circumstances. In 18th century, Jane Austen tried her hand at the epistolary in juvenile writings and her novella Lady Susan, she abandoned this structure for her later work. It is thought that her lost novel “First Impressions” which was redrafted to become Pride and Prejudice, may have been epistolary. Pride and Prejudice contains an unusual number of letters quoted in full and some play a critical role in the plot.

In nineteenth-century novels and especially in Honoré de Balzac’s novel Letters of Tivo Brides, in which two women who became friends during their education at a convent correspond over a 17 year period, exchanging letters describing their lives. Mary Shelley employs the epistolary form in her novel Frankenstein (1818). Shelley uses the letters as one of a variety of framing devices, as the story is presented through the letters of a sea captain and scientific explorer attempting to reach the North Pole who encounters Victor Frankenstein and records the dying man’s narrative and confessions.

In the late 19th century, Bram Stoker released one of the most widely recognized and successful novels in the epistolary form to date, Dracula. Printed in 1897, the novel is compiled entirely of letters, diary entries, news clippings, telegrams, doctor’s notes, ship’s logs, and the like, which Stoker adroitly employs to balance believability and dramatic tension.

There are three types of epistolary novels:

1.monologic (giving the letters of only one character, like Letters of a Portuguese Nun),

3.polylogic (with three or more letter-writing characters, such as in Bram Stoker’s Dracula). In addition, a crucial element in polylogic epistolary novels like Clarissa and Dangerous Liaisons is the dramatic device of discrepant awareness’: the simultaneous but separate correspondences of the heroines and the villains creating dramatic tension.

Fyodor Dostoevsky‘s first novel, Poor Folk (1846) was a series of letters between two friends, struggling to cope with their impoverished circumstances and life in pre-revolution Russia.

The Tenant of Wildfell Hall (1848) by Anne Brontë is written in the form of letter from the narrator to his friend with the main heroine’s diary inside it.

The Moonstone (1868) by Wilkie Collins uses a collection of various documents to construct a detective novel in English.

Bram Stoker’s Dracula (1897) uses not only letters and diaries, but also dictation cylinders and newspaper accounts. While the novel draws on the epistolary form, by the end of the story it reduces it, along with other media, to a monstrous “mass of typewriting”

S. Lewis used the epistolary form for The Screwtape Letters

Saul Bellow‘s novel Herzog (1964) is largely written in letter format. These are both real and imagined letters, written by the protagonist Moses E. Herzog to family members, friends and famous figures.

Stephen King‘s novel Carrie (1974) is written in an epistolary structure, through newspaper clippings, magazine articles letters, and excerpts from books.

The Fan (1977) by Bob Randall is a thriller in epistolary form.

Alice Walker employed the epistolary form in The Color Purple (1982). The 1985 film adaptation echoed the form by incorporating into the script some of the novel’s letters, which the actors spoke as monologues.

John Updike’s S. (1988) is an epistolary novel consisting of the Heroin’s letters and transcribed audio recordings.

Richard B. Wright’s Clara Callan (2001) uses letters and journal entries to weave the story of a middle-aged woman in the 1930s.