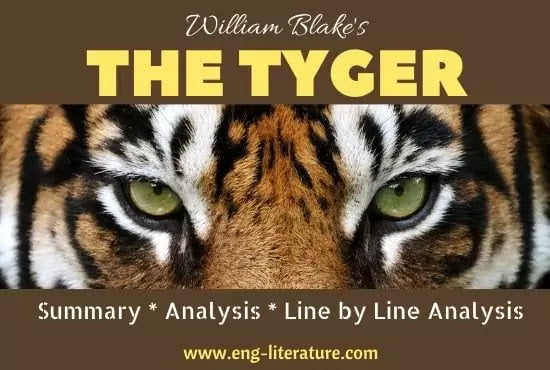 The Tyger by William Blake

The Tyger is taken from Blake’s Songs of Experience which appeared in 1794. Songs of Experience represents the corruption of man by the immoral forces of society. They are clearly the product of disillusion. Between the publication of Songs of Innocence and that of Songs of Experience came the French Revolution of which Blake was, like Wordsworth for a time an enthusiastic supporter. His eyes were opened to the evils and vices of a doomed world. Religious and moral tyranny mutilates the joys of life. The earth is unhappy; she lacks love and gaiety. The symbol of life is not the lamb as in Songs of Innocence, but the tiger, marvelous, no doubt, but an object of terror, whose existence bears witness to the fact that all creation is not good.

William Blake (1757-1827) is one of the precursors of the Romantic Movement in England.

(i) His genius is essentially lyrical. His poems are marked by essential lyrical qualities, such as simplicity sincerity, intensity of feeling and music.

(ii) He had love and sympathy for the underdogs. His Songs of Experience rings with his anger at what man has made of man-at the wretched condition to which the common run of men have been reduced by the upper section of the society.

(iii) He is a mystic poet. And his is a joyful mysticism. His mysticism is free from melancholy. There are no mournful regrets in his poetry, nor is there sighing for the things dead and gone. Sorrow does not make him weep. Rather he accepts sorrow as a necessary twin to joy: “Joy and woe are woven fine.” And Blake expresses his mystical thoughts through symbols which are both traditional and original.

The tiger is a fearful creature with a lovely shape. In the forests at night its eyes burn brightly like balls of fire. The poet wonders to know who framed the tiger’s body, fearful but well-proportioned. The creator of the tiger must have gone to distant volcanic deeps or skies in order to fetch needful fire for its eyes. He must have to take great physical labour and much time in forming the muscles of the tiger’s heart. And when the tiger became a living reality, his paws and legs appeared dreadful.

The creator also must have used the huge hammer, anvil and chain in forming its symmetry. He displayed great skill and courage while creating the tiger. The angles were so amazed to see the creation of the tiger that they threw down their spears and wept. The poet wonders if God smiled with satisfaction to see his new creation (e. tiger). He cannot make out how God who created the meek and innocent lamb also created the ferocious tiger

The Tyger is one of the representative poems of Blake’s Songs of Experience. Its theme is the process of the tiger’s creation and its end. The tiger has an awe-inspiring but well-proportioned figure. Its ferocity and strength are appalling. Even the angles were sorrowful with fear at what the tiger could do and they broke down in tears. The poet can hardly believe that the creator of the lamb could dare to create such a creature as the tiger. And yet no power other than God Himself could design and frame the terrible symmetry of the tiger. But the poem has deeper meaning.

There are two elements in life- innocence and experience. When innocence is destroyed by experience when such social evils as injustices, oppressions and superstitions seek to devour the joys of life—the tiger (i.e., ferocious strength) is needed to restore innocence. The tiger may also symbolize the fierce forces in the human soul which are needed to break the bonds of experience (i.e., the sorrows. disappointments and injustices which the mind has experienced). Stanley Gardner remarks, “the tiger is a symbol of spiritual revolt backed by uninhibited natural energy.”

The Tyger is noted for the remarkable use of symbols (i.e., images). What Blake describes here are not actual events as ordinary men see and understand them, but spiritual events which must be stated through symbols (images) in order that they may be intelligible. And the symbols (images), as in other poems of Songs of Experience are of his own making (i.e., original) in contrast with those of Songs of Innocence which are largely drawn from the Bible. The images of “The Tyger” recur, as M. Bowra says, in the prophetic books, but in the poem, detached from any very specific context, they have a special strength and freedom.

The tiger is Blake’s symbol for the fierce forces in the soul which are needed to break the bonds of experience. Some think that the tiger images spiritual revolt backed by uninhibited natural energy, while others take it to represent a burning quality-wrath. “The forests of the night” in which the tiger lurks stand for ignorance, repression and superstition. Some think that the forests in the poem image the world of experience where the many sterile errors (dead trees) conceal the path and dim the light

In “fire” (lines 1, 6, 8) Blake makes use of an old symbol. With Blake as with many other poets fire images wrath. In the Faerie Queene Spenser wrote, “Wrath is fire.” Milton also spoke of “flames, the sign of wrath awaked through the repeated use of fire” image Blake intends to suggest that the great purpose of wrath is to consume error, to kill those stubborn beliefs which cannot be removed by the tame horses of instruction. Blake uses stars (line 17) to symbolize the angels. This use is Biblical. In the Book of Job we find “When the morning stars sang together, and all the sons of God shouted with joy…..” In “the stars threw down their spears” we have the image of the triumph of Innocence over Experience.” Stanley Gardner, however, takes stars to symbolize material power. The lamb images innocence. This image is Biblical.

“The images of The Tyger are so compelling that for most purposes they explain themselves, and we have an immediate, overwhelming impression of an awful power lurking in the darkness of being and forcing on us questions which pierce to the heart of life.” (Bowra)

The Tyger is a study in the problem of life. And the problem is how to synthesize innocence with experience. It is evident that the climax of the poem, “Did he who made the Lamb make thee?” is not an exclamation of wonder, but a very real question whose answer Blake was not sure of. Still Blake believed that this synthesis will come through the wrath of God. As M. Bowra says,

“The wrath which Blake found in Christ, his symbol of the divine spirit which will not tolerate restrictions; but asserts itself against established rules, was the means by which he hoped to unite innocence and experience in some tremendous synthesis.”

The order of the lyric is typical of Blake. He shows the entire process of the tiger’s creation. First, the fire of the tiger’s eyes is gathered from the cosmos; then his heart is created, then the feet and ultimately the brain. Blake describes the process of creation by a series of wonder-struck questions and not by an elaborate description. The effect is one of wonderful improvisation, though the manuscripts show that Blake made great many corrections during the composition of the poem.

The Tyger is remarkable for its artistry. In this poem Blake gives a wide berth to epithets, and succeeds not by colour, but by the use of strong, naked outline. The diction is almost monosyllabic, and the trochaic movement, freely used, has a dignity here which it usually lacks in English. Alliteration is most effectively used to emphasize metrical accent:

What immortal hand or eye

Could frame thy fearful symmetry?”

Tyger – Tiger is Blake’s symbol of the fierce forces of the soul.

Fearful symmetry – the tiger is terrible and shapely. It is a wonderful creation of God. Evil and wrath symbolized by the tiger are another manifestation of Christ.

Seize the fire – It is reminiscent of the Prometheus legend. Blake’s mystical heroes Ore and Los are identified with Prometheus. Blake owned a copy of Robert Potter’s very competent translation of Aeschylus’ tragedies.

Twist – an image from anatomy.

Sinews – muscles. Sinews are the fibrous tissues which unite the muscles to the bones. How long and how much strength and work it must have taken in forming the sinews of your heart! And how dreadful your paws and legs are!”

What dread hand….feet – In the original draft of the poem, ‘hand’ and “feet’ were the subjects of a main verb in the next stanza which began “Could fetch it from the furnace deep’.

The poet asks what hammer and the chain and the anvil were used in forming the symmetry of the tiger. Through which furnace did the brain go before it is formed? What is the tremendous grasp which can catch you in all your deadly terror.

This line is repeated in The Four Zoas. The stars threw down their spears and fled away. The line may mean after the rebel angels weeping with distress and bitterness, had acknowledged their defeat at Christ’s hands. God created our world, including the animals. It is a proof of God’s greatness that Christ is symbolized by the fiercest and meekest animals. T.S. Eliot wrote in Gerontion, “In the juvenence of the year/Came Christ the tiger.” He means some enormous cosmic crisis.

With the tears – They threw down their spears in amazement and wept to see such a merciless being, as the tiger, created.

Did he smile – The tiger is pleasing to God, because the tiger is part of his purpose and pleasure. Here are two questions. Is God satisfied with the creation of tiger and is He who has created Lamb has also created tiger? Could God create both good and evil? If the creator is not God, but the demiurge, as Miss Kathleen Raine suggests, approaching the poem through possible sources in Jacob Bohme and the Hermetica and glossing it from parallel imagery in Urizen’s account of his fall in The Four Zoas, the answer to the first question would be No, but the answer to the second would be Yes. Blake presents the problem of evil as he found it in the Hermetic and Gnostic tradition and so he leaves the questions unanswered, because the answer would be ‘a no or yes’ of such depth and complexity. The lamb and tiger are two states of the human soul.

Did he …. thee – this line links the poem to ‘The Lamb‘ in Songs of Innocence. It was Christ who made the Lamb. Lamb and tiger are both the creations of God. (See Expl.)

Frame – At first he wrote ‘form’ and then rejected it in favor of frame. The creator who is the God of Innocence and not the jealous tyrant and the law giver (Urizen) smile over triumph of the lamb. In other words, when the rebel angels are defeated by Christ (whose symbol is the lamb) God is happy.