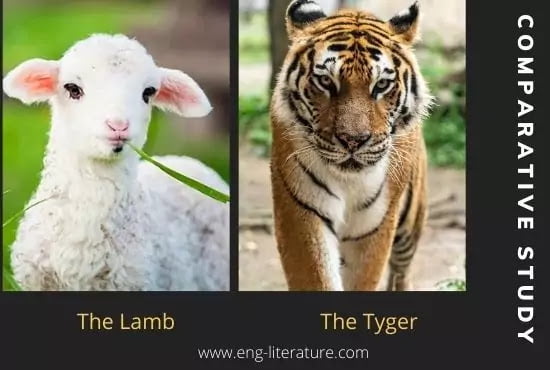 A Comparative Study of The Lamb and The Tyger

“The Lamb” and “The Tyger” are both representative poems of William Blake. They celebrate two contrary states of human soul – innocence and experience. “The Lamb” celebrates the divinity and innocence not merely of the child but also of the least harmless of creatures on earth, the lamb. The child asks the lamb if it knows who has created it, given it its beautiful and sweet voice. He does not wait for the answers, but answers the questions himself. He refers to the meekness and gentleness of God, the lamb’s creator. His descent to the earth as a child (i.e. his incarnation) and his own is the lamb’s divinity. He concludes wishing the lamb God’s blessing.

“The Tyger” shows how experience destroys the state of childlike innocence and puts destructive forces in its place. It beaks the free life of imagination, and substitutes a dark, cold, imprisoning four, and the result is a deadly blow to blithe human spirit. The fear and denial of life which come with experience breed hypocrisy which is as grave a sin as cruelty. When innocence is destroyed by experience, God creates the tiger (i.e. fierce forces) to restore mind to innocence.

Both ‘the lamb’ and ‘the tiger’ are created by God. “The lamb” represents the milder and gentler aspects of human nature, the tiger its harsher and fiercer aspect. The lamb represents the calm and pleasant beauty of creation, the tiger its fearful beauty. The gross contrariety between the nature of the lamb and tiger makes the poet ask – “Did he who made the lamb make thee.”

In “The Lamb” Blake sets about his poem with the innocent question,

“Little Lamb, who made thee?

Dost thou know who made thee?”

In “The Tyger”, he sets about the poem with a question that strikes terror in us,

What immortal hand or eye

Could frame thy fearful symmetry.”

The tiger is God’s wrath, as the lamb His love. The  tiger is a ruthless, natural predator and it is man’s own “burning passion shut up within his natural body.” The questioner throughout cannot make out how such things come to be. The lamb, on the other hand, is an object of joy. Its bleat tills all the valleys with joy. The questions asked in The Lamb proceed from the simplicity and innocence of the questioner (the child). They have nothing of the baffling and enigmatic creature of the questions asked in “The Tyger”.

In both the poems Blake makes use of symbols to convey his ideas. In “The Lamb” he draws the symbol from the Bible, and takes use of such a familiar figure as the Lamb of God. In “The Tyger” the symbols, as in other poems of Songs of Experience, are of his own making (i.e. original). The tiger is Blake’s symbol for the fierce forces in the soul which are needed to break the bonds of experience. “The forests of the night” in which the tiger lurks stands for ignorance, repression and superstition, and ‘fire’ for wrath.

Both the poems are remarkable for their lyricism their spontaneity of expression, and their intensity and sincerity of feeling. The diction of “The Tyger” is almost monosyllabic and the trochaic movement, freely used, contributes to the musical effects. The same is true of “The Lamb”. The rhythmical variation in the Lamb (three-stress couplets opening and closing each stanza, and four-stress central couplets) is effective in presenting the child’s delight in asking questions and the enumeration of the questions.

Thus the poet Blake brings out the two aspects of society – some are holy and innocent and others ferocious and violent. So the child is confused to see the society through his experience. But in these two poems demand the spiritual mysticism of God’s activity. God creates not only holy and innocent, but when He needs He can create the cruel and violent – this world the variety co-exist in equal measure, thus the creator keeps the balance in his creation and unity in diversity.