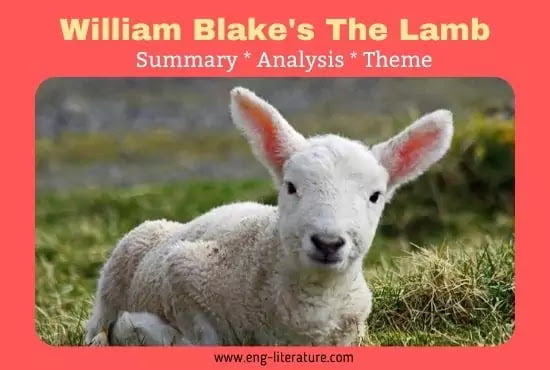 The Lamb by William Blake

The Lamb belongs to William Blake’s Songs of Innocence, which appeared 1783. Songs of Innocence is a volume of poems in which the poet looks the world through the innocent eyes of childhood and sees beauty and love all around in the society of man and in the world of nature. In the world of these Songs there is not any suspicion of motives, no envy or jealousy. In it human beings have the same kind of security and assurance as belongs to lambs under a wise shepherd or to children with loving parents.

The shepherd and Father of Blake’s poems is God. Again, it is He who is Himself a lamb and becomes a little child. In the Songs of Innocence God, lamb and child are one and form a trinity. The world as depicted in the Songs is a “lower Paradise, very near to the perfect time when lion shall lie down with the lamb.”

The child makes a series of questions to the lamb. “

A child asks a lamb if it knows who has created it, bid it graze in the meadow beside the stream, given it delightful and cozy fleece, and sweet soft voice that fills the valleys with joy. The child does not wait for the answer He himself answers his questions. He tells the lamb that his creator calls himself a Lamb. He is meek and mild, and came on earth as a little child. Then he remarks that he, a child and it, a lamb are called by the name of God (i.e. are manifestations of the same Godhead). They are united with the Almighty Being by virtue of their innocence, gentleness and meekness. Then he wished that God might bless it.

William Blake’s The Lamb is a typical poem of the Songs of Innocence, a collection of Blake’s poems which give us glimpses of an ideal world free from the deadening influence of social custom, selfishness or jealousy which assails the mind of a man as he grows up. It is marked by the simplicity that becomes a child. The child is struck with wonder at the beauty, innocence, meekness and mildness of a lamb and out of it’s naively asks it if it knows who its creator, giver of its food, beautiful fleece and charming and joyful voice is. He does not, however, wait for the answers, but himself gives them.

The meaning of the poem is simple enough. But this simplicity is more apparent than real. It is charged with deeper spiritual meaning which becomes obvious after the questions are asked and answers done. The deeper meaning comes out when the child remarks,

“I, a child and thou a lamb

We are called by His name”

These lines reveal that all the created things are manifestations of Godhead. The child and the lamb are unified (made one) with God and the quality that links them together is innocence. The harmlessness of the lamb and the purity of the child are but the manifestations of God’s innocence. The child harbours no evil thought nor does he act premeditatedly as the adults debased by experience do. Thus God, lamb and child form a holy trinity.

Blake, despite his deeply religious nature, does not believe that God exists apart from man, but says expressly:

“God is Man and exists in us and we in him….Imagination is the Divine Body in every man.”

The Lamb expounds that in the world of innocence (i.e. God) even the meanest creature such as the lamb which we consider low and ignoble occupies as high and noble a position as man because of its divinity.

The Lamb is a romantic poem. It reveals Blake’s mystical, religious and idealistic view of the world. It is the glorification of childhood which is a great romantic quality, and which registers its highest water-mark in Wordsworth. Here the child is identified with God and shown as familiar with the mystery of creation. The pastoral setting of the poem lends a romantic charm to it. The picture of the valleys rejoiced by the tender voice of the lamb, and the green, river-side pasture where the lamb grazes is not only romantic, but also anticipates the naturalism of Wordsworth. The poem also transports us to the far off days when the earth was a near paradise and when animals spoke like human beings.

The poem is a triumph of lyricism which is the hall-mark of romantic poetry. It is characterized by such lyrical qualities as spontaneity, simplicity, sincerity and musicality.

Innocence is a prevalent theme throughout all of Blake’s poetry. The other theme is man and the natural world. In the poem, the natural world is not a bad place like reality. In this, the poem implies that God is a kind caretaker and will lead us innocent lambs through the world. The lamb represents the innocence in the natural world and the theme of childhood.

The Lamb illustrates Blake’s use of symbols. In Songs of Innocence his symbols are largely drawn from the Bible, and since he makes use of such familiar figures as the Good Shepherd and the Lamb of God, there is not much difficulty in seeing what he means. The lamb symbolizes the gentle, tender, innocent, pleasant aspect of human soul. It also symbolizes Jesus Christ who is referred to as the Lamb of God “that takes away the sin of the World.”

The diction of the poem is excellent and contributes to the lyrical quality of the poem. The couplet which begins or closes each stanza has three stressed syllables with feminine rhyme, as

“Little Lamb, who made thee

Dost thou know who made thee”

The central couplets have each four stresses with masculine endings. As –

By the stream and o’er the mead,”

The Lamb – The lamb is a symbol of innocence. The Tiger in Songs of Experience stand for the fierce forces in the universe and in the soul.

Who made thee – Does the child know who created him? This refers to the Christian belief that Christ, the Son, was created by God, the Father.

Bid the feed – ordered you to eat by the riverside and the meadows.

Clothing of delight– delightful clothing. Blake thinks of delight as the clothing of innocent soul which is represented by the child and the lamb.

Softest clothing, wooly bright – The lamb has a cover of soft wool over the body. It is bright because it is innocent and pure. It has a simple bright beauty as contrasted with the terrible beauty of the tiger.

Tender voice – The lamb has soft voice that fills the entire valley with joy.

N.B. Blake indicates the soft body and tender voice of the lamb. The tiger has “fearful symmetry” ‘fire in the eyes’, ‘sinewy heart’. The contrast between the lamb and the tiger is to be noted.

He is meek, and He is mild – The child is echoing the Christian belief. It is Charles Wesley’s hymn: “Gentle Jesus, meek and mild”.

Ta child, thou a lamb – The child, the lamb and God are alike innocent. The innocence and goodness of God are reflected in the lamb and the child.

We are called by His name – Child and lamb are called God. God is child, and lamb.

Little lamb……God bless thee! – The child unconsciously but seriously addresses the lamb as another child. In his innocence and joy, he makes the repetition.