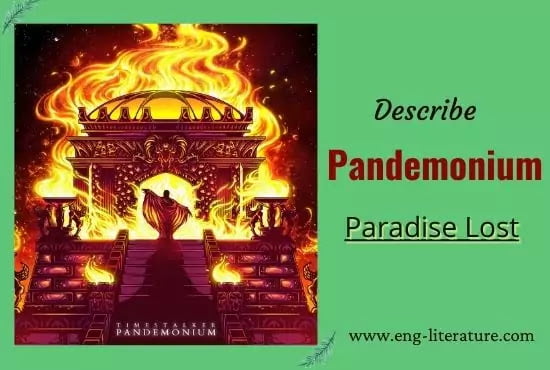 The word “pandemonium” is a compound word formed by joining Greek words “pan” and “demonious” meaning ‘a place or abode of all demons’.

In Paradise Lost Book 1, Milton describes pandemonium as a structure of architectonic excellence. This marvelous structure is situated in the pit of hell where darkness is only visible. On top of a hill, which constantly vomited out ‘fire and rolling smoke’, the huge brigade of the fallen angels undertook the task to build up the high structure of pandemonium. The leader of the builders was Mammon. Mammon when he was in Heaven had his eyes downward bent on the golden pavement. He was not concerned with anything divine or exalted. Other angels had interest in divine but Mammon was exceptional.

Prompted by Mammon, men searched for riches on earth and robbed their mother earth of the treasures hidden within her. Under the direction of Mammon the fallen angels dug a hole in the hill and extracted gold from it. The fallen angels, directed Mammon, worked with miraculous speed and built the massive structure called Pandemonium. Milton describes effort of the fallen angels in the following words:

“Strength and Art are easily outdone

By Spirits reprobate, and in an hour

What in an age they with incessant toil

Milton says that the architectonic excellence of the Pandemonium could easily excel human achievements of Babylon and Egyptian pyramid. What took an age or about twenty years for human beings to build, it took only an hour for the fallen angels to build. Another group of fallen angels prepared cells near on the plain. They separated impurities and collected the metallic ore in these cells. The metallic ore was derived from liquid fire. A third group of fallen angels made moulds of varied shapes and designs, and from the boiling cells carried off the molten metal by some peculiar mode of transportation. This is how the foundation was constructed.

Then with the sound of harmonious music, square columns and master beams and doric pillars were raised on top of the foundation. Every cornice or frieze was embossed with golden decoration. The roof too was intricately decorated with gold. The magnificence of the structure was such that it surpassed Babylon and Egyptian pyramids. Pandemonium had a stately height and the doors were made of ‘brazen folds’. The building itself had enormous space within it. Milton very meticulously described the interior decorations:

“From the arched roof

Magic many a row

With Naphtha and Asphaltus yielded light

Some admired the work, and some the architect. Milton a little later described the chief architect:

“his hand was known”

In heaven by many a towered structure high. In ancient Italy Ausonian Land “men called him Mulciber.” In ancient Greece he was known as Hephaestus.

It is in this structure called Pandemonium, built with awful ceremony and trumpeted sounds, that the first conference of all the fallen angels in Hell was held.

Pandemonium introduces that imagery of technology, commerce and luxurious barbaric tyranny which surrounds the fallen angels, for they foreshadow all human error. Pandemonium suggests a Florid Renaissance (or late Roman) building.

Pandemonium is the devil’s attempt to recreate heaven and is concession to their frustrated psychology. Evil, Milton once more seems to suggest, can only make not create. In place of the natural clarity of Heaven are naptua-fiares. In need for light the devils imitate the society of heaven.