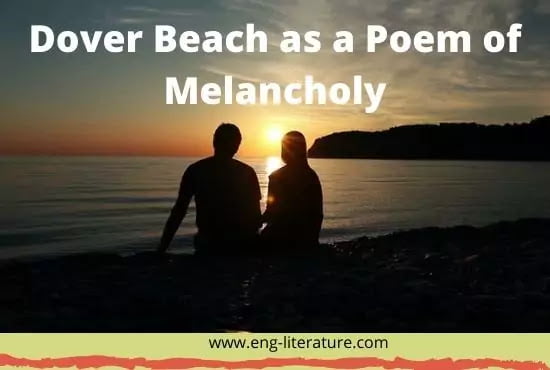 Dover Beach as a Poem of Melancholy

Melancholy is the dominant note of Arnold’s poetry. It pervades his poems from beginning to end and it is this “which seems to the modern reader his peculiar characteristic.” (E. K. Chambers). A sense of estrangement of man from God, from nature, from other men, and above all, from his own true inner self looms large in his poems, and lends them peculiar poignancy. This melancholy strain is sounded in all his poems-from the longest to the shortest, from the gravest to the gayest. His poetry seems to be like a violin played on by some regretful artist in a lonely room.

The genesis of Arnold’s melancholy may be traced back to the trends and tendencies of the age he lived in. The conflict between religion and science, which shook men’s faith in God, men’s loss of the sense of the spiritual values of life, which was generated by the unprecedented material prosperity in the Victorian age, the thought that man does not control his own destiny, but is controlled by some power beyond and above himself-all produced in him the melancholy mood. Moreover, the poet’s disappointment in love, the death of his friends and relatives, and above all, the melancholy cast of his mind, were also responsible for his melancholy outlook on life.

One of the painful riddles Dover Beach embodies is the loss of faith and the consequent doubt, despair, distraction that come to grip man’s mind. The general decline of faith and Arnold’s own resultant bewilderment constitute the theme of Dover Beach.

Dover Beach is a memorable expression of Arnold’s melancholy view of life. The general decline of faith and Arnold’s own resultant bewilderment and melancholy constitute the theme of his Stanzas from the Grande Chartreuse; in The Buried Life Arnold expresses the belief that in a successful love relationship he may discover certain values which are absent from modern life, Dover Beach combines both these ideas.

The poet stands on the beach near Dover and observes the calm and quiet sea. The moon shines in all her glory. It bathes the seascape and landscape. The sea is at full tide. The waves rush in and then retreat to the deep sea casting back pebbles on the shore. This incoming and recession of the waves produce a slow, musical cadence which brings the poet in the feeling of sadness. The poet is reminded of Sophocles, the great Greek tragedian, who had a similar sad experience centuries back when he saw the turbid ebb and flow of the waves of the Aegean sea.

The poet then laments over the loss of men’s faith in religion. His heart writhes in pain to think that faith which once filled the minds of men and vivified their whole being, has now become a thing of the past. He is appalled to see that the society has fallen a prey to doubt, disbelief, distraction and fear. With the disappearance of faith the society looks like a naked shingled beach. Kenneth Allott finds in the lines,

“But not I only hear Its melancholy, long, withdrawing roar,

And naked shingles of the world.”

a valid poetic equivalent for Arnold’s feelings of loss, exposure and dismay.

The last eight lines of the poem give a fine poetic expression to Arnold’s melancholy. He says that the world which appears to be a dreamland of beauty has nothing to endear life. It has really neither joy nor love nor light nor certitude nor peace nor relief from pain; and

“We are here as on a darkling plain

Swept with confused alarms of struggle and flight,

The pessimism of these lines is hardly to be paralleled in literature. It surpasses even that of Hardy, the prince among the pessimistic writers. In this world of darkness, confusion and chaos, true love with its comfort of constancy may prove a source of consolation and peace.

Nothing could be more profoundly melancholy than the exquisite poem Dover Beach. “Yet there is nothing maudlin, nothing unmanly about it.” (Compton–Rickett). In the words of Paul, H. W.,

“Profoundly melancholy in tone it expresses the peculiar turn of Mr. Arnold’s mind, at once religious and skeptical, philosophical and emotional, better than his formal treatises on philosophy and religion. In spite of the loss of religious faith, Arnold does not lose his heart, as he still finds consolation, a haven of rest and peace, in true love.”