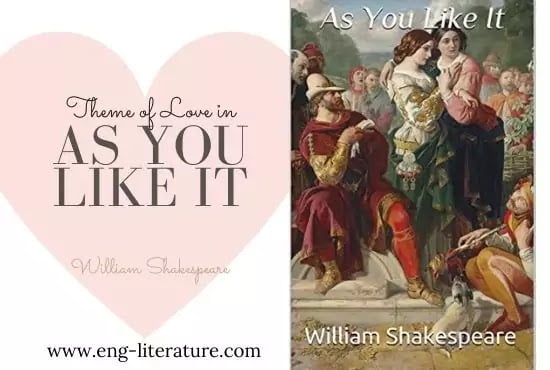 Theme of Love in the Play As You Like It

As You Like It owes its charm and beauty to the flavour of love that pervades the plot. The drama maintains a number of love episodes, which as a matter of fact spring from the main fountain – love between Orlando and Rosalind. But there is another touch of love in the play, which distinguishes it from most of the Shakespearean comedies. It is the innocent yet sincere and penetrating love between the two cousins Rosalind and Celia.

Love in the Elizabethan Period

It was only post-Renaissance dramatists who made a bold experiment in introducing love as an absorbing theme in drama. In the Elizabethan age romantic love  or courtly love often became the main ingredient of writings. To Elizabethan people “to live was to love, and to love was to love romantically.” It was left to Shakespeare and his great contemporaries to achieve a mystical alliance between comedy and romance, and to elevate comedy from the region of the farcical and the ludicrous to the realm of the poetic and the romantic. A note of high seriousness often characterised a comedy of love. As You Like It is replete with different portrayals of love.

True Love between Orlando and Rosalind

True love pervades the souls of Orlando and Rosalind. The very presence of Rosalind radiates soul-enkindling light, and its interpenetrating rays have thrilled the encircling gloom of Orlando’s heart. He is at once lifted out of the slough of despondency and despair; for him life now receives a new significance. Romantic love – love at first sight – has stirred the deepest depths of his heart which naturally seeks consolation in offerings of amatory verse dedicated to the adoration of the lost beloved. The heroine gifted with an unusually rich fund of common sense, fully alive to the silly excesses committed by youthful lovers, cautioned by Celia and warned by Touchstone, is exceptionally competent to come to her lover’s rescue.

In asking Orlando to woo her in masquerade, when she remains unrecognised, Rosalind hits upon a very novel method of indirectly teaching her lover proper restraint in the art of wooing, not without now and then subtly fanning its consuming flame, and at the same time herself drinking the delicious cup overflowing with his passionate outpourings of love. We are greatly amused when she assumes, when herself madly in love the lofty philosophical pose of a very wise and experienced man and thus speaks to Orlando: “Love is merely a madness; and I tell you deserves well a dark house and a whip as mad men do, and the reason why they are not so punished and cured is that the lunacy is so ordinary that the whippers are in love too.” (III. ii) This camouflaged courtship is a unique experience for both the lovers and it is the most entertaining form of stage representation of love in literature.

Blind and Abrupt Love between Celia and Oliver

The love of Orlando and Rosalind is not as sudden as that of Oliver and Celia. Celia has all along affected an airy cynicism about the love that had sprung up in her cousin’s heart at first sight; with an exquisite irony of unconsciousness both Rosalind and Orlando wonder at the love that Celia and Oliver all of a sudden feel for each other. No sooner had Celia and Oliver seen one another than they fell in love, there are no opportunity of wooing-in earnest or in jest.

This love-affair does not have the imaginative, fanciful, poetical quality of the Rosalind-Orlando affairs nor does this love possess that wit, humour, gaiety which marks the love of the other pair. The suddenness and abruptness of love between Celia and Oliver is somewhat surprising. Shakespeare seems to hay been in a hurry to unite these two characters at the cost of realism.

Prosaic Love of Touchstone and Audrey

The union of Touchstone and Audrey represents the most prosaic kind of love. Audrey is ugly. But he does not mind that. In her very presence he refers to her as “a poor virgin, an ill-favoured thing.” He says that he is going to take a woman whom no other man will. He sees no harm in marriage, even though he knows that wives are often faithless. As for Audrey, she knows she is not fair but she has the opportunity to marry a social superior. By this marriage,

“Touchstone lets in the East Wind of realism into the artificial palm-house of Arden.”

This is clearly evident between Celia and Rosalind as Celia abandons her home and privileges to join Rosalind in the forest. The pair is not actually sisters but support each other unconditionally.

At the onset of the drama brotherly love is something missing in the characters. Duke Frederick has banished his brother Duke Senior and usurped his dukedom. Oliver hates his brother Orlando and wants him dead. However, to an extent, this love is restored in that Oliver has a miraculous change of heart when Orlando bravely saves him from being savaged by a lioness. Likewise Duke Fredrick acknowledged his faults and restored his elder brother his dukedom.

Significance of Phrase “Whoever Loved that not at First Sight“. If we consult the evidence of the play it will be abundantly dear that Love-at-first-sight is the main theme of the comedy of As You Like It. All the lovers in this play, courtiers as well as rustics, follow this kind of love. Such a conception of love is romantic, and Shakespeare has employed unhesitatingly for no less than four pairs of lovers, two from the higher and two from the lower class of society, follow such a mode of romantic love.

The end of the play is a triumphant celebration of love’s order. Music sung. Hymen appears mysteriously, and the eight lovers are joined in marriage and all make merry. Love’s ideal has been achieved.