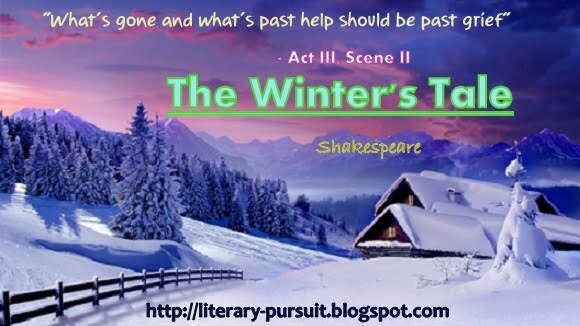 King Leontes
Mamillius
Florizel
Hermione
Mopsa
King Polixenes
Time
Paulina
Perdita
Autolycus
Camillo
Antigonus
Archidamus
Cleomenes
Dorcas
Emilia
Clown
Dion
This drama is
generally classified as a comedy play by William Shakespeare. However it is
also referred to as a ‘problem play’, because it cannot be easily described as
either a tragedy or comedy.
As the curtain discloses for the first act on
an antechamber in Leontes’ palace, in Sicilia, we overhear his councillor
Camillo talking with a follower of the King of Bohemia. King Leontes of Sicilia begs his childhood friend,
King Polixenes of Bohemia, to extend his visit to Sicilia. Polixenes protests
that he has been away from his kingdom for nine months, but when Leontes’s
pregnant wife, Hermione, asks him he agrees to stay. Leontes become possessed
with jealousy—convinced that Polixenes and Hermione are lovers, he orders his
loyal Camillo, to poison the Bohemian king. Instead, Camillo warns Polixenes of
Leontes intentions and the two men run away from Sicilia.

Leontes
now accuses his wife and declares that the child she is having is illegitimate.
He throws her in prison, over the protests of his nobles, and sends to the
Oracle of Delphi for what he is sure will be confirmation of his suspicions.
Meanwhile, the queen gives birth to a girl, and her loyal friend Paulina brings
the baby to the king, in the hopes that the sight of the child will soften his
heart. He only grows angrier, however, and orders Paulina’s husband, Lord
Antigonus, to take the child and abandon it in some lonely place. While
Antigonus is gone, the answer comes from Delphi—Hermione and Polixenes are
innocent, and Leontes will have no heir until his lost daughter is found. As
this news is revealed, word comes that Leontes’s son, Mamillius, has died of a
sickness brought on by the accusations against his mother. Hermione, meanwhile,
falls in a swoon, and is carried away by Paulina, who subsequently reports the
queen’s death to her husband.

Antigonus,
meanwhile abandons the baby on the Bohemian coast, reporting that Hermione
appeared to him in a dream and bade him name the girl Perdita and leave gold
and other tokens on her person. Shortly thereafter, Antigonus is killed by a
bear, and Perdita is raised by a kindly Shepherd. Sixteen years pass, and the
son of Polixenes, Prince Florizel, falls in love with Perdita. His father and
Camillo attend a sheepshearing in disguise and watch as Florizel and Perdita
are betrothed—then, tearing off the disguise, Polixenes intervenes and orders
his son never to see the Shepherd’s daughter again. With the help of Camillo,
however, who longs to see his native land again, Florizel and Perdita take ship
for Sicilia, after using the clothes of a local rogue, Autolycus. They are
joined in their voyage by the Shepherd and his son, a Clown, who are directed
there by Autolycus.

In
Sicilia, Leontes is still in sorrow after all this time welcome the son of
his old friend. Florizel pretends to be on a diplomatic mission from his
father, but his cover is blown when Polixenes and Camillo, too, arrive in
Sicilia. The Shepherd tells everyone his story of how Perdita was found, and
Leontes realizes that she is his daughter, leading to general rejoicing and
happiness. The entire company then goes to Paulina’s house in the country,
where a statue of Hermione has been recently finished. The sight of his wife
makes Leontes sorrowful, but then to everyone’s amazement, the statue comes to
life it is Hermione, restored to life. As the play ends, Paulina and Camillo
are engaged, and the whole company celebrates the miracle. And this famous
tragic comedy comes to an end.
~~~~~#~~~~~