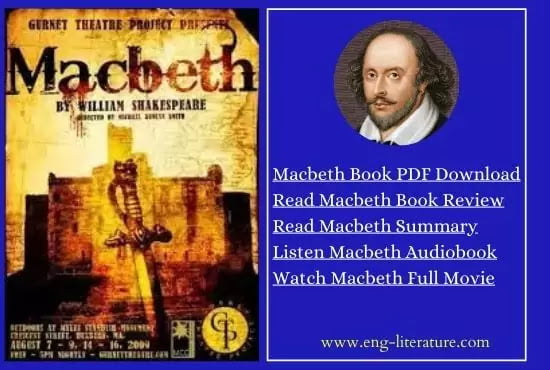 “Fair is fowl and fowl is fair.”

How many modern plays do you believe will be bestsellers and entertaining audiences four hundred years after they were written?

It’s quite pointless to review The Tragedy of Macbeth. If you didn’t know you were reading a piece from Elizabethan literature, you could’ve thought that the plot was from a 2012 blockbuster movie. This is exactly where Shakespeare succeeds. Like all great writers, his appeal is timeless. You can very well identify with all his characters; somewhere inside you feel like they do, you yield to temptations, you make pacts with the Devil, and the master playwright knows it.

You love and hate the characters simultaneously. You curse Macbeth and his Queen to hell for their sins, yet you weep blood for their sufferings. Macduff wins at last, kills Macbeth for good, yet he never achieves the stature of his foe. In spite of knowing his destiny, being made aware of the diabolical deception of the three witches, the “usurper” fights the man “being of no woman born” with unflinching courage. Macbeth remains a grand character when he dies, as he has lived, by the sword:

Yet I will try the last. Before my body
I throw my warlike shield. Lay on, Macduff, And damn’d be him that first cries, ‘Hold, enough’

Macbeth and Banquo, Scottish generals are returning after putting down a rebellion against the king of Scotland (Duncan). They meet three witches who greet Macbeth as Thane of Cawdor and king hereafter. They also predict that Banquo shall be father to a line of kings.

Immediately afterwards, Angus and Rosse come as messenger of the king and tell Macbeth that Duncan has appointed him Thane of Cawdor as a reward for his services. The lord who was the Thane of Cawdor has lost the title for his treachery to the king; Macbeth ponders on this and writes to his wife about the prophecies. Lady Macbeth determines to do all that she can to make him king.

Duncan honours Macbeth further by coming to stay at his castle. Macbeth is led to murder the king by the force of the reproaches of his wife. Though some suspect him; he is made king. Duncan’s sons (Malcolm and Donalbain) have fled.

In view of the prophecy of the witches regarding Banquo, Macbeth tries to make himself secure on the throne by hiring murderers to kill Banquo and his son Fleance. Banquo is killed, but Fleance escapes. Later Macbeth sees the ghost of Banquo at the royal banquet. Macbeth is frightened and raves almost disclosing his guilt. Lady Macbeth saves the situation by her ingenuity and by dismissing the party.

Macbeth, already a tyrant seeks out the witches who bid him beware of Macduff. They give him the false sense of security by telling him that none of woman born shall harm him and that he will not be defeated till Birnam wood moves to Dunsinane Hill. But they also show the pageant of descendants of Banquo who will be the coming rulers of Scotland. Macbeth is deceived by the juggling fiends. He is encouraged by hope and then depressed by the show of kings.

Macbeth determines to kill Macduff. Macduff escapes to England. Macbeth has murdered Macduff’s wife and children. Rosse takes the news to Macduff who now urges Malcolm, the rightful heir to the throne of England to rid Scotland of the tyranny of Macbeth. They determine, with English aid to overthrow Macbeth, Macduff vowing personal vengeance on the tyrant.

The English soldiers led by Siward and the Scottish lords and soldiers combine to attack Macbeth. Macbeth’s caste is besieged. Macbeth is defiant and at the same time heart-sick. Lady Macbeth who has gone mad takes her own life.

Malcolm tells his soldiers to take a bough from Birnam wood as camouflage as they advance. Macbeth decides to fight and die in harness on the back. He kills young Siward. Macduff meets Macbeth and challenges him to fight. He declares that he was from his mother’s womb ‘untimely ripped’. He fights with Macbeth and kills him. The time is free – Malcolm assumes the throne and declares to restore Scotland to order and peace.