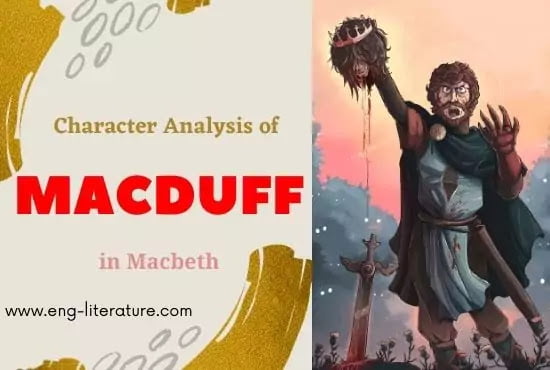 Character of Macduff in Macbeth

Macduff, after his brief indulgence of the porter in the porter scene (Act 2, Scene 3 ), becomes a most positive character. In Holinshed’s chronicle, Macduff offends Macbeth when he sends his men to work for the building of the castle in Dunsinane but he himself does not go. Macduff fears his life because by that time Macbeth has become a tyrant and has killed Banquo. Macduff flees to England and excites Malcolm to rouse the Scottish nobles. Macduff reveals later to Macbeth that he is “even that thy Wizards have told thee of who was never born of my mother, but ripped out of the womb.” Macduff slays Macbeth.

Thus Shakespeare takes the bare materials from his source for conceiving Macduff as an agent of Nemesis and endows him with many individual traits which mark him off from other lords.

Macduff comes into limelight when he announces the discovery of Duncan’s murder in extreme extravagant language which emphasizes the horror and the sin of the murder.

He describes the king as ‘Lord’s anointed’ thus emphasizing the Divine Right of Kings (an idea embraced by James I). So over-wrought is Macduff that he tries to find the right image to describe revulsion, referring to the Gorgon (which turned men to stone if they directly looked at it) and then to Doomsday. It is his emotional nature that distinguishes him from other characters. He calls all from sleep, he is considerate to Lady Macbeth, but reveals the news to Banquo in the same breath, a mark of his righteous emotion and disgust. His suspicion of Macbeth is immediate, shown by his question “wherefore did you so?”

When Macbeth reveals that he has killed the chamberlains. Thereafter Macduff suggests through innuendo (‘those that Macbeth has slain’) and (that Malcolm and Donalbain being suspected of the ‘deed’ because they have fled) that he suspects Macbeth of the murder of Duncan. This suspicion matures into conviction, and he thinks that Macbeth has wrongly won the throne. So he does not attend the coronation at Scone while Rosse like a time-server decides to join the coronation. Macduff’s remarks are highly ironical “Lest our old robes sit easier than our new!” Matters are made worse when he obviously refuses to attend Macbeth’s banquet. Macduff rejects the ‘unholy king’ and seeks assistance from the “holy king” (of England).

Macduff is a true patriot. He puts the country before the family. He is so much concerned for his country and anxious to rid the country of the tyranny of a usurper and put the crown on the rightful heir that he leaves his wife and children to their fate. We may question his wisdom ad judgment with regard to his family, but his sincere attachment to his country is above question. He is determined to set things right and is courageous to be subservient to Macbeth’s will.

Macduff’s family life is, however, sweet and happy. When his wife reproaches him with lack of love, it comes from injured affection. Her feelings for him appear in her spirited reply to the murderer’s question: ‘Where’s your husband?’ ‘I hope in no place so unsanctified where such as thou may’st find him.’ His son also admires and loves him. To the murderer’s remark that Macduff is a traitor, the boy gives an angry reply: ‘Thou lies, thou shag-haired villain.’ This sweet and affectionate domestic life of Macduff contrasts with the harsh and cruel life of Macbeth and Lady Macbeth and their gradual disintegration.

Macduff’s reaction to the news of his family’s slaughter shows his concern on their account. He blames himself, suffers anguish and utters grief in poignantly brief words –

“My children too? …. And I must be from thence!” “My
wife killed too? …. “all my pretty chickens and their dam at one fell swoop”.

His brief utterances are charged with intense and deep emotions. He must grieve for the loss of family ties because he is a father and a husband. But he must take revenge on their slaughter like a man.

The shock of bereavement provides him with the appropriate motive for his vengeance on Macbeth. He is urged on to play the role of the instrument of Nemesis. He is determined to give to Scotland her legitimate ruler. His tolerant loyalty to Malcolm is attested by the fact that he is ready to endure his greed and lust if he had other graces. When Malcolm says that he has no kingly graces, he has the forthrightness and courage to say that he is not “fit to live” and recalls that Duncan was ‘a most sainted king’ Malcolm appreciates his ‘integrity’ and ‘noble passion‘.

Macduff is a hero, a patriot. He is a man of action. He is by nature reticent and reserved. His resolve on revenge is firm and he wishes immediate revenge:

Bring thou this fiend of Scotland and
myself.”

When the leaders discuss prospects of
battle against Macbeth, he wishes them to put on ‘industrious leadership’. When
he meets Macbeth in the field of battle, he wastes no words in abuse and threats:

“I have no words

My voice is in my sword”.

Macduff is the fittest person to lead the opposition against Macbeth and make the time free from tyranny and nightmares for Scotland.