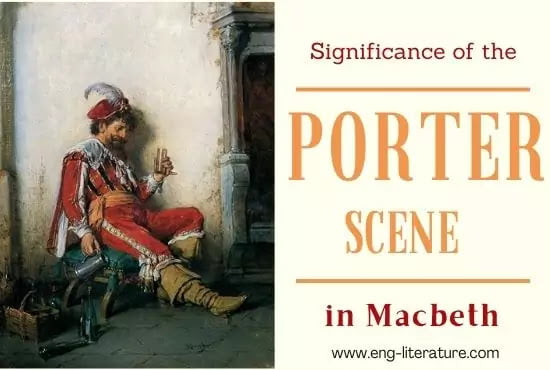 The Porter’s speech is dramatically constituted the poor element of the play Macbeth. It is a powerful piece of irony without which the play would be poor. The Porter becomes a symbol of the Porter of Hell-gate as we come across in the Morality Plays in the Middle Ages. The Porter of course is a comic figure who contributes to the theme of equivocation. When the murder is over, we find the Porter coming on the stage, drunken and fanciful:

“Here’s a knocking, indeed! If a man were a Porter of Hell Gate, he should have old turning the keys.”

Many critics think that the Porter’s speech serves as the greatest speech of dramatic irony. The Porter refers to Beelzebub, the devil who is worshipped in Palestine. He is also described in the New Testament as ‘the Prince of the Devils’. The Porter also refers to the other devils’ name who can be identified as Satan.

👉Macbeth as a Morality Play

👉Macbeth as a Tragedy

👉Imageries and Symbols in Shakespeare’s Macbeth

The Porter fancies that he admits three men to hell. These three are a farmer, a Jesuit equivocator and an English tailor. The farmer was greedy and hoarded the corn “on the expectation of the plenty” of corn, and of the consequent plenty of profit. He expected the price to rise and fetch him a huge profit. The prospect of good harvest frustrated his hopes. In despair, he hanged himself. Suicide is a sin and therefore the farmer is in hell.

The second man to enter hell was a Jesuit, an equivocator. Jesuits were accused of encouraging equivocation upon the oath of swearing and foreswearing. The reference is to the trial of Henry Garnet, the conspirator and the supporter of Jesuits in England. It historically refers to the Gun-Powder plot of 1605. In the Gun-powder plot, Henry Garnet tried to defend his perjuries by means of the doctrine of equivocation. Here metaphorically the equivocator is Macbeth, who equivocates so cleverly in the earlier scene (Murder Scene, Act 2, Scene 2).

The third candidate for admission to the porter’s hell is an English tailor who cut cloth out of a French hose which is traditionally close-fitting. It implies that the tailor is destined to go to hell because over-reaching himself. Here the tailor also represents, the overreaching self for Macbeth who is but to “Roast the goose”– smoothing the iron for the appropriate reason.

The porter says all these under the influence of wine. When his drunkenness goes off, his vision fades, and as the cold bites him, he comes slowly into an awareness of the reality around him:

“I pray you, remember the Porter.”

The Porter refers to Dante’s description of devil in Inferno. The devil is the other name of the traitor of the king, country and friend.

The porter’s speech is a relief to the tragic tension and terror of earlier scenes. It is a convention of Elizabethan tragedy to introduce a comic relief. The porter’s speech in prose is full of word-play and association that are a commentary on the main action of the play. He is indeed porter of hell-gate, Macbeth’s castle being a hell, and Macbeth is seen as the Devil. His ramblings effectively delay the discovery, so that with his lascivious humour and his stumblings and natural comic effects, a degree of tension is built up in the audience and the readers.

The porter speaks in true Calvinistic fashion of damnation. It is the gate of hell because Lady Macbeth has called on ‘the murdering ministers’. The porter’s speech is prolepic as well as prophetic. It looks back to the execution of the Thane of Cawdor who was guilty of treason, and looks forward to the equivocation of the fiend’ that lies like truth. Macbeth is guilty of equivocation and hypocrisy and he cannot equivocate in heaven. Equivocation and treason link it up with the main themes of the play.

The dialogue between the porter and Macduff (which is often omitted from texts) provides a valuable clue to the theme of appearance and reality. The opposition between conception and execution, purpose and fulfilment and many antitheses that the play contains are suggested here.

The Porter Scene is must for theatrical perfection because when the murder is done, Macbeth and Lady Macbeth need their hand wash. Their hands were tinged with the colour of red. Therefore to give a rational space for the discharge of these action Act 2, Scene 3 is an integral of the play. De Quincey in his famous article “On the Knocking at the Gate” describes

“When the deed is done, when the work of darkness is perfect… the knocking at the gate is heard… it suspends our thought process.”

“The Porter Scene allows the comic irony to reach its climax.”

The Porter Scene is possibly one of the best comic scenes or comic interludes from the pen of the Elizabethan dramatist. For the Greeks the tragedy was a serious play; Christopher Marlowe, the University Wit introduces the comic relief (buffoonery) in his famous play Dr. Faustus as Seven Deadly Sins; in Hamlet, Shakespeare paints the Grave Digger Scene to satisfy comic relief in a drama full of suspense. In Macbeth, Porter’s speech  which is charged with dramatic irony, pungent with the language of equivocation stands out as specimen of comic relief to attract the groundlings to theatre.