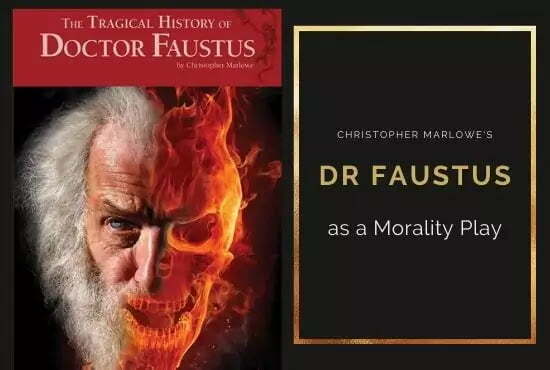 Dr. Faustus as a Morality Play

Dr. Faustus is an extension of the traditional morality play. Though Dr. Faustus has number of those characteristics that are found in morality plays yet it is not a thorough going morality play because, it powerfully reflects the spirit of the renaissance and Machiavellian ideas, an indomitable spirit of adventure, audacious ambition, a staunch faith in the powers of the individual and supreme yearning for limited power and knowledge and the enchanting sensuous pleasures of life.

On the other hand, Dr. Faustus can also be regarded as a morality play because it is didactic and holds a moral lesson, however, it does not thoroughly match with the medieval morality plays because it also deals with the inner conflict of the hero in the play.

Morality plays developed later than the miracle plays in the fifteenth century. These plays were designed to present a dramatized guide of Christian way of living and Christian ring. Hence, the general theme of these plays was theological. They dealt with the conflict between good and evil forces, in the good was ultimately victorious and the evil was defeated. In this kind of plays, Satan worked as the central figure of the play.

Whereas, there were no characters, but personified abstractions that act in the play, because the characters in this kind of plays represented only one abstract quality and they also did not develop with the development of the story, they remained stick to one quality, therefore, they were called personified qualities not characters. Then with the development of the story evil qualities surrounded the devil and the good qualities repelled from the devil and counted him with their goodness and ultimately they defeated the evil.

Dr. Faustus also deals with the conflict between good and evil. Faustus is the main figure of the play, bestowed with a titanic personality and all the other characters are subordinate to him, Faustus is a child of renaissance who wishes to attain the unlimited knowledge and super human qualities. He has been a doctor in divinity and a very learned man in various fields of knowledge, yet he is dissatisfied and longs for more knowledge. Thus he seeks to leave the path of God and collides with Satan through the art of magic. Thus, he, himself becomes a devil incarnate.

These metaphysics of magicians

And necromantic books are heavenly.”

He sells his soul to Devil for twenty four years of blasphemous life, full of vain and sensuous pleasure.

Of course there is a constant tussle between the vice and the virtue in the mind of Faustus. Marlowe objectifies this conflict in the form of good and evil angles. But Faustus surrenders to the forces of evil and is eternally damned in the end.

Thus Marlowe appears to be keeping is with the tradition of moralities, as he depicts the destiny of a man who denies God to be eternally damned. So this was also the aim of all the morality plays. Thus, Marlowe gives a perfect moral lesson though the doom of Faustus. This is also evident from the mournful presentation of chorus in the end.

“Faustus is gone, regard his hellish fall,

Whose fiendful fortune may exhort the wise.

Only to wonder at unlawful things,”

Besides the main theme and the purpose of the play elements in Dr. Faustus also coincide with morality Such as, in moralities the characters are theological abstractions of vice and virtue, like: Faith, Anger, Gluttony, Avarice etc. Same is the case with Dr. Faustus, as the good and evil angels stands for the path of virtue and vice. The appearance of the Old Man symbolizes the prick of conscience in Faustus and the force of righteousness, as the ‘Old Man’ claims to Faustus:

“To guide thy steps unto the ways of life.”

The use of ‘The seven deadly sins‘, namely pride covetousness, envy, gluttony, sloth and lechery, is also a famous and favourite tradition of moralities. Here, in Dr. Faustus they also represent the passions for evil. The old familiar figure of the devil is also not missing in this play. Mephistopheles is a sub-ordinate of Lucifer. In a way, Faustus himself represents a devil.

The whole of the play focuses on the conflict of Faustus. All the time he is shown in great mental torture, torn between two extremes. Though at one moment he speaks:

“God thou serve thine own appetite;

Where in is fixed the love of Beelzebub.

Yet, at another moment he utters:

Where art thou Faustus, wretch what hast thou done;

This conflict continuous tills his end, when he is afraid of damnation. But now, he has to reap, what he has sown.

The earlier morality plays also suffer from a looseness of plot. Dr. Faustus also lacks the unity of plot. It has proper beginning and a proper ending, but not a proper middle. In fact Marlowe wants to show the triviality of magic through the frivolous activities and desires of magicians.

Despite all these similarities, some critics pronounce Dr. Faustus as an atheistic document, because it presents the victory of Evil or, Satan in the end. These critics hold the view that as Marlowe himself was an atheist, therefore, he presented the fall of divinity in his play.

But this accusation does not hold much strength. Because the end of the play does not project the fall of divinity rather it reflects the defeat of Machiavellianism and the fall of renaissance ideals, in the form of Faustus damnation. The dispute shown in the play, is not between God and Satan, it is between man and devil. And here Marlowe denounces himself, when he resents through Faustus that any man, who leads to some devilish ambition leaves the path of God, would be punished because of his blasphemous act, just like Faustus. That’s why a critic utters:

Thus we can conclude that Dr. Faustus can be pronounced as a connecting link between the medieval morality plays and the illustrious Elizabethan drama.